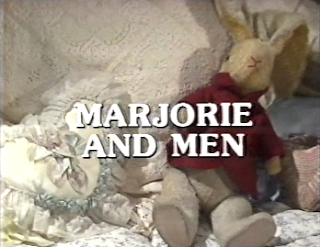 Dating has never been anything less than a highly precarious and tricky activity. Two completely different entities coming together and hoping that things will click is a recipe for disaster. It’s not impossible to succeed, but, you can rest assured that your path towards happiness will be littered with misfires and misfortunes. If, of course, you’re the wrong side of 40 and have an interfering mother acting as a matchmaker, matters get a whole lot worse. And, for Marjorie Belton, that’s exactly what’s happening in Marjorie and Men.

Divorced from her once beloved, Marjorie Belton (Patricia Routledge) is on the lookout from love. Residing, for now, with her mother Alice Tripp (Patricia Hayes), Marjorie seeks to find a new man while working as a bank clerk in Norwich. With the heartbreak of her marriage to Mr Belton rescinding into the past, Marjorie is hitting the dating circuit with an exuberant and effervescent outlook on the opposite sex. Dating, however, is far from easy for Marjorie. 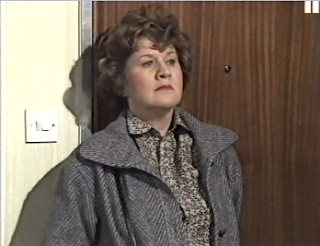 While Marjorie is more than capable of running her own life, her mother is convinced that she should intervene and help force true love’s hand. With a glimmer of charm amongst her bulldozer-like approach, Alice Tripp is a woman for whom agreeing with, more often than not, is the easiest option. Potential suitors are invited round to the family home without Marjorie’s consent and Alice is keen for her daughter to attend live art classes with her in pursuit of men. Work, too, brings an unwarranted intrusion into her romantic liaisons in the form of her manager Henry Bartlett (James Cossins). Respectably married, Bartlett bumps into Marjorie in a singles bar one evening. Horrified at discovering that he’s drinking in a bar that should be anathema to married men, Bartlett begs Marjorie to smuggle him out. Marjorie duly does this, but finds that it sends Cupid’s arrow flying straight into Bartlett’s heart. Much less overbearing, Sid Parkin (Ronnie Stevens) is a fellow bank clerk and, despite a sparkle of romantic admiration for her, acts very much as her confidante.

Disregarding these obstacles, Marjorie manages to line up a string of dates with potential suitors. Dates find her disco dancing with the cheeky, yet charming Norton Phillips (George Baker), riding pillion alongside the slick but heartless Frank Aston (John Quayle) and being bored to tears by the potato obsessed greengrocer George Banthorpe (Timothy West). In fact, there’s little escape from dating for Marjorie, but she does experience a brief respite when helping out on an amateur production of HMS Pinafore. Even then, though, Marjorie finds male attention awaiting her in the wings.

Only the second sitcom produced by Anglia Television (and the first since the late 70s Backs to the Land), Marjorie and Men was a six episode series that was transmitted on Friday evenings in the summer of 1985. The series was jointly written by John Gorrie and Peter Spence, each writer penning three episodes each. The initial idea for Marjorie and Men had come from John Gorrie and he would also go on to direct the series, having directed endless TV plays and series since the early 1960s. 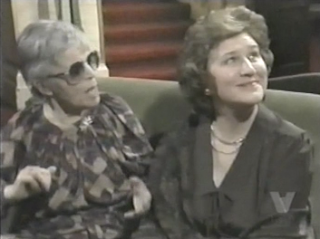 Peter Spence’s involvement was much more detached and, aside from a brief meeting with Gorrie and producer John Rosenburg, acted merely as a hired writer. Spence suspects that he was brought into the series due to the perception that he excelled at writing for middle-aged women following To the Manor Born. The middle-aged woman that would star in Marjorie and Men, however, was less well known for her comedy prowess.

Aside from a few one-off appearances in Steptoe and Son, Doctor at Large and a string of monologues in Victoria Wood: As Seen on TV, Patricia Routledge was not yet the comedy legend she would later become. Routledge had previously turned down several sitcoms and she had to thoroughly read through five of the scripts before taking on the role. At the time, Routledge told Jan Etherington of the TV Times that the part appealed to her due to Marjorie’s dedication to romance despite the failure of her marriage.

The pursuit of love is a well-worn trope when it comes to television, but it’s a subject which remains eternal, universal and, therefore, relevant. And, in Marjorie and Men, John Gorrie has created a sitcom bathed in warmth and strong performances. Although traditional in its reach, it’s far from staid and, most excitingly, provides the initial steps for a comedy legend in waiting.

Along with Roy Clarke, Patricia Routledge created one of the greatest ever sitcom monsters in Hyacinth Bucket. It’s no surprise to learn that Keeping Up Appearances is the BBC’s most successful export. Routledge, of course, is an actress of some repute having won a Tony Award back in the 1960s and, in 1988, an Olivier Award to go alongside it. As you can expect, she doesn’t disappoint as Marjorie Belton. It’s a confident performance and one that benefits from the character’s desire to find romantic happiness in a sea where the fish are rapidly dwindling. 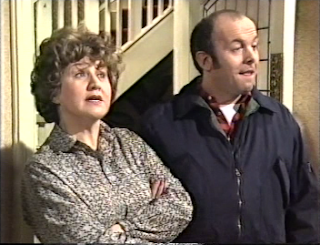 Routledge is helped, of course, by another Patricia, in this case Hayes. A character actress of some repute, Hayes is fantastic as the scheming, yet ultimately well meaning mother who appears desperate to get her daughter married off once more. With a twinkle in her eye, Hayes portrays Alice Tripp as a woman possessing a sharp wit and even sharper tongue. Proud of her manipulative skills, she acts as a ruthless counter to Marjorie’s more organic approach to social occasions.

Back at the bank, Routledge is again flanked by fine comic actors in the form of James Cossins and Ronnie Stevens. Character actors to a tee – and with extensive CVs to back this – they help to support Routledge’s character by intermittently injecting social awkwardness and a shoulder to cry on. Michelle Collins also pops up in an early role as bank clerk Debbie and contributes a young dynamic in amongst a cast who, it’s fair to say, are all middle aged. These characters, milling around at the bank, are unfortunately underused and their true value to the series never quite surfaces. 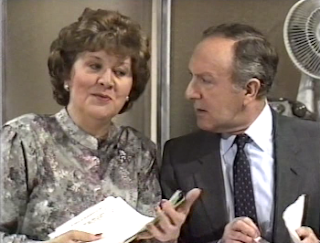 Much more critical to the series are the men attempting to woo Marjorie. All actors of some repute, they create an engaging chemistry with Routledge which keeps the viewer glued to the screen in the hope that romance could blossom. Mark Kingston and George Baker stand out as being notably charming and it’s a real delight to see their talents at full throttle. Timothy West, admittedly, is portrayed as a terrible bore who stands no chance with Marjorie, but even that performance is transformed into a joy thanks to his wealth of experience. 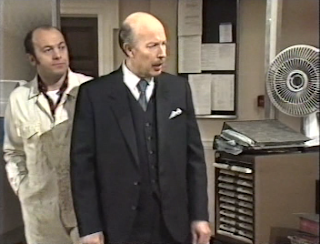 The scripts almost, but not quite match the quality laid down by these performances. Each week brings a different date for Marjorie and, with it, an array of new settings. Certain dates go fantastically such as her dancing escapades with Norton, but others end in hurt and heartbreak as evidenced in her tryst with Frank Norton. They’re scripts which help to develop a multifaceted character in Marjorie, outwardly and mentally strong, but no stranger to vulnerability. The revolving door of men, although satisfying that sitcom requirement of constantly resetting the protagonist’s clock, fails to cement a strong consistency and the series almost splutters to an end.

Finally, if we’re watching a sitcom, then we’re obviously here for the laughs. Marjorie and Men is clearly geared towards a demographic who are looking for light laughs and frivolities, so this should indicate the impact of the humour. Thanks to the sophisticated, well composed dialogue and a firm understanding of comedy, it achieves this with ease. From Mrs Tripp’s devilishly polite form of forcefulness through to Marjorie donning her gladrags for the disco and finishing with Bartlett’s rapidly rising obsession with Marjorie, there’s plenty here to raise a few smiles.

The premise of Marjorie and Men is such that one series was probably enough. There’s just not enough mileage in the tank to justify Marjorie embarking on yet more dates. Due to its short lifespan and lack of repeats, it’s no surprise to learn that it’s not a sitcom that’s remembered by huge swathes of the public. However, this is by no means a marker of the series’ quality. Certain sitcoms, much like the opposite (or same) sex, slide in and out of our lives leaving little more than a few happy memories. This is what Marjorie and Men does and sometimes that's enough.
Posted by Telly Viewer at 7/02/2018
Email ThisBlogThis!Share to TwitterShare to FacebookShare to Pinterest