If Scotland had only ever contributed Naked Video, Rab C Nesbitt and Still Game to British comedy then it would represent a significant contribution. Thankfully, for our funny bones, Scottish comedy doesn’t begin and end with these three shows.

With an output that also includes A Kick up the Eighties, City Lights and Limmy’s Show, Scotland can be rightly proud of its unique take on comedy. Cast your eye towards the periphery of these rightly venerated shows, though and you’ll discover one of the lesser known, yet just as fantastic, shows in the form of Laugh??? I Nearly Paid my Licence Fee.

Laugh??? is a sketch show that brings together Robbie Coltrane, John Sessions, Louise Gold and Ron Bain and casts them into a diverse comedy landscape of three minute laughs.

Football reporters concentrate their line of questioning on the horseplay in the team-bath afterwards than the actual match, hardline Protestant activist Mason Boyne rallies against the local video shop’s decision to sell corruptive videos of the Pope’s visit and the aliens from Nimon attempt to capture an Earthling, but end up abducting a goat to whom they administer large amounts of Tennent’s Lager. 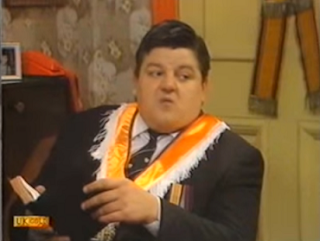 Sketches often segue from one into another, so if all the Nimon aliens die in one sketch, the next sketch may find Edgar Bloodlusten – yes, a parody of crime writer Edgar Lustgarten – waxing lyrical about the deaths that have just occurred. As with most sketch shows of the era, there’s also time for musical numbers such as Robbie Coltrane’s completely unintelligible paean to Glasgow sung in strong, Glaswegian patois. Most elaborate of all is The Master of Dundreich, a weekly parody of period drama which finds Young Tom at the mercy of his cruel Uncle Murdoch who is keen on turning him into a ventriloquist’s dummy.

Breaking Down the Licence Fee

Six episodes of Laugh??? were produced by BBC Scotland and aired on BBC Two on Monday evenings in the 9pm slot in late 1984. Produced and directed by Colin Gilbert, Laugh??? arose like a phoenix from the ashes of A Kick up the Eighties and faced very few, if any, problems in being commissioned as Gilbert recalls:

“AKUTE came to an end because cast members like Rik Mayall and Tracy Ullman were becoming big stars elsewhere and wouldn’t be returning. However, the new Controller of BBC2 Graeme McDonald let us keep the budget and just said we had to make a similar sort of show. I was very keen to keep working with Robbie, so Laugh??? was conceived as a sort of vehicle for him.

The commissioning process was a lot simpler in those days, there were far fewer gate-keepers and a level of trust that people would find unbelievable today. Graeme MacDonald was a former drama producer and he wanted a sketch show for a certain slot. He didn’t see it as his business to tell comedy producers how they should do their shows, he just let you get on with it. I can’t remember ever being asked who was going to be in Laugh??? or what kind of show it would be”

Ron Bain and Robbie Coltrane made the leap over from A Kick up the Eighties, but John Sessions and Louise Gold made their way to Laugh??? along different routes as Gilbert explains:

“We had been watching John Sessions in his live one man shows for a while and had used him as the presenter of a one-off misinterpreted archive news show looking back at the events of 1983 called “A Clip Round the Year”. When Laugh??? was being cast he was top of our list after Robbie.

Louise Gold was recommended by the late Laurie Rowley - the script editor on AKUTE and for a brief period the script editor on Laugh??? He also wrote for Spitting Image and Louise was one of the puppeteers. He said she was very funny and had a fantastic singing voice so we met her, liked her and cast her”

As with all sketch shows, the writing credits are a lengthy affair, but putting the team together was relatively simple for Gilbert:

“Throughout the early 1980’s I had been trying to create a Scottish based writing team via shows like Naked Radio and by 1984 I had quite a few freelancers plus a couple of assistant producers, Neil MacVicar and Philip Differ, who also wrote. Niall Clark was an experienced sketch writer based in Edinburgh and Ian Pattison, although still pursuing his day job, was a major contributor”

Less straightforward, however, was the involvement of Laurie Rowley who was due to be the script editor. Rowley, of course, was a writer of some talent and you only have to look at his ‘darts’ sketch from Not the Nine O’Clock News for evidence of this. Unfortunately, a breakdown in communication occurred over a period serial Rowley had penned for Laugh??? called The Master of Pilestones. 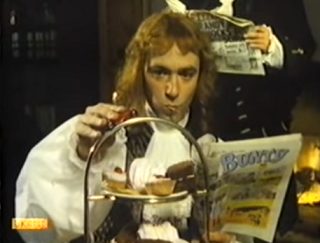 Focussing on a brutal 18th Century English squire, the serial proved too similar to a pair of characters that Robbie Coltrane and Rik Mayall had been improvising named The D’Arcys. Coltrane was hopeful that The D’Arcys would lead to a series for him and Rik, so he felt that Pilestones threatened the viability of this. He was, however, prepared to do it if it was rewritten to be Scottish.

Phillip Differ and Gilbert made a few slight adjustments to the script and handed them to Rowley to review. Unbeknownst to Gilbert, though, his PA had typed up the new script on a new word processor that she didn’t really know how to use. The resultant script was an incomprehensible jumble and Rowley did not react well as Gilbert remembers:

“The next day I got his furious letter of resignation saying we had destroyed his “baby”. How Laurie thought that we would have even been able to film it in that state is beyond me to this day. Unfortunately, the damage was done and irreparable as some of the things he said in his letter about other members of the team couldn’t be unsaid.

He didn’t want a credit which is why The Master of Dundreich is credited to Robert Louis Armstrong. The sad thing is that many years later he congratulated us on what a fine job we had made of it. He was a major loss to the writing team as he would have upped the more accessible type of material in the show which might have made it more of a success at the time”

Although a few episodes were repeated in 1985, Laugh??? did not prove successful enough to merit discussions of a second series. The demand for Robbie Coltrane’s talents was also rapidly rising, so Gilbert decided to move onto pastures new with Naked Video which would prove to be a massive success.

Given the wild success of A Kick up the Eighties, it comes as no surprise that BBC2 would keep faith in Colin Gilbert et al. And, with Robbie Coltrane given centre stage, Laugh??? was clearly positioned to do some serious business in the world of comedy. Unfortunately, Laugh??? didn’t capture the zeitgeist in quite the same way that A Kick up the Eighties did and, yet, there’s plenty to celebrate within. 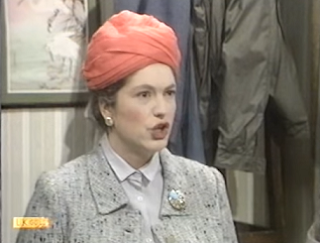 The most impressive aspect of Laugh??? is the acting on offer. It’s clear to see that Coltrane is destined for great things due to the sheer variance of characters and moods he adopts throughout the series. From the religious fury of Mason Boyne through to the creepy glee of Edgar Bloodlusten and finishing on the hilariously bad Ted Rogers parody Ted Todgers, it’s a masterclass in range. The quality doesn’t end with Coltrane either. 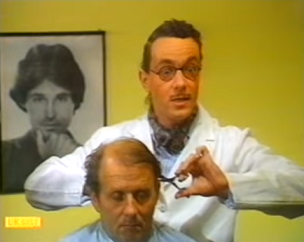 Sessions, whose vocal talents merit a book all of their own, delivers his usual refined grace and forms a sparkling partnership with Coltrane, particularly when they play the cocksure, but dopey New York cops. Louise Gold – the only English member of the cast – brings great vibrancy to Laugh??? and her singing voice is quite remarkable, check out her sketch which lampoons Christmas pop songs for verification. Ron Bain, of course, has helped populate some of the most successful Scottish comedies of all time, so, even though he rarely takes centre stage in Laugh??? his character work is more than enough to eke out every last laugh. 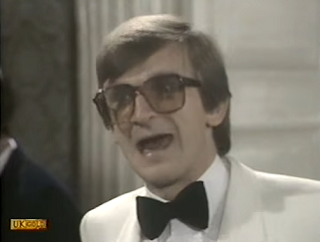 And, when it comes to laughs, the writing behind the cast is more than strong enough to guarantee more hits than misses. Given the inherent variety of a sketch show, the writers are given free rein to tackle almost every avenue of comedy and the hilarity is delivered with a remarkable precision. With the benefit of hindsight, the strength of the writing should come as no surprise as the majority of the writers went on to work for Naked Video and, for Ian Pattison, he would go on to write one of the country’s greatest ever sitcoms in Rab C. Nesbitt. 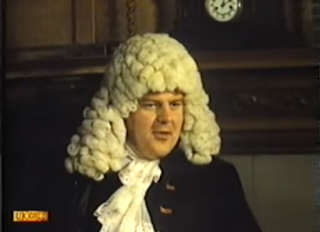 One of the real curiosities of the writing behind Laugh??? is the segue format employed between sketches. Sure, it brings a delightfully clever sense of consistency, but too often it backs itself into a corner with the restrictions imposed on where it can go next. Accordingly, the device disappears for a few sketches and renders any previous consistency redundant. For Gilbert, it was a format he was not particularly keen on:

“The problem is it ties you into a fixed running order and in the worst case scenario forces you to use material you would otherwise jettison. The reason we used it in Laugh??? a lot was because Robbie Coltrane had insisted he would only do the series if it were not, as in AKUTE, stuffed with quickies and one-liners. He found the process of changing costume and make-up for a 30 second gag multiple times a day irksome.

This went entirely against my instincts because quickies give you the punctuation and change of pace that sketch shows need. We tried to achieve said changes of pace with the segue sequences but not entirely successfully and I think the absence of quickies was a major factor in the show’s lack of success with the audience at the time. In the end there was only one quickie in the entire series, a First World War poem written by Coltrane himself!”

Worth the Licence Fee?

Laugh??? may not get the plaudits that have been bestowed on other sketch shows from the same era, but this is no reflection on its quality. Coltrane and Sessions are clearly the stars, and they’re truly magnificent, but it’s a team effort that ensures Gold and Bain never languish on the sidelines. The sharp and gloriously silly writing (one sketch finds Louise Gold dating a door) is the final piece of the jigsaw and ensures that Laugh??? embodies everything that was exciting about Scottish comedy in 1984.
Posted by Telly Viewer at 7/22/2018
Email ThisBlogThis!Share to TwitterShare to FacebookShare to Pinterest