Read more »
Posted by Telly Viewer at 6/13/2015 7 comments:
Email ThisBlogThis!Share to TwitterShare to FacebookShare to Pinterest

Break in the Sun

Our teenage years can be a bit of a nightmare what with having to worry about acne, how cool our trainers are and, most importantly, the opposite sex. However, these are all rather superficial worries and, for some, the least of their teenage angst.

For some teenagers, the real life rigours of life can come a calling and completely deconstruct everything you've held dear and believed would be never ending. And when this type of upheaval comes to town what you need to do is take a Break in the Sun.

Getting Away From it All

Patsy Bligh is a girl at breaking point. If she sticks around in the abusive environment she's in then her spirit is going to snap. And it could cause irreparable damage.

Plucked from the security and warmth of her Margate home - where the grandmotherly Mrs Broadley (Kathleen Heath) dotes upon her - she now finds herself trapped in Deptford thanks to her mother, Sylvia Green (Catherine Chase), getting married and having a baby with Eddie Green (Brian Hall). 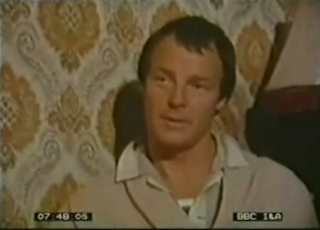 Now, the main thrust of Patsy's woes and worries come directly from the embittered rage of Eddie who not only belittles her verbally, but also gets handy with his fists leaving her bruised and so full of anxiety that her nights have become a real horrorshow of bedwetting. And this frustrates Eddie even more ergo a vicious cycle ensues.

Obviously, Patsy is rattled up by this and feels completely alienated from her household where her mother is far too busy with the new baby. Sure, Patsy's got her mate Kenny Granger (Kevin Taffurelli) - ginger, portly and prone to swimming a few lengths in the murky Thames - but there's only so much support his bespectacled form can offer. 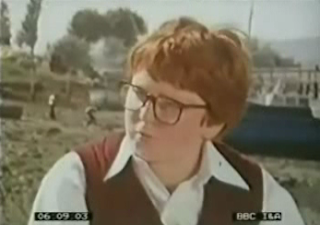 Patsy's only escape from all this hideousness appears to be immersing herself in the world of drama. She's a bit of a starlet next to her monotone peers and, just maybe, this precocious talent is going to help her escape the doldrums of Deptford.

Now, what's gone and happened is that Patsy's spied a curious old boat down at the quay which houses an acting troupe who are travelling up and down the coast putting on a production of 'A Happy Release'. Oh and they're heading towards Margate where the comforting bosom of Mrs Broadley resides. 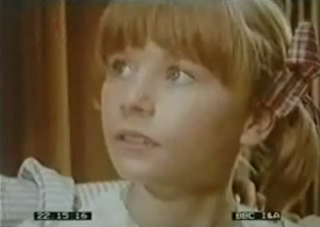 Patsy, of course, soon finds her eyes twinkling with visions of her treading the boards and finding refuge from the bothersome Eddie. And, by a stroke of luck, half term's coming up, so wouldn't it be just spiffing for her to join the production and sail all her worries away?

Not going to happen unfortunately as the actors aren't too keen on whisking her away from her parents into a world of seafaring performance. And rightly so, the conscientious old buggers. 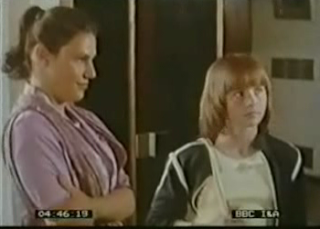 However, Patsy's determined to get away from it all, so she tricks Eddie into writing some vague nonsense about allowing her to go on a school trip. The actors are overjoyed and soon head off onto the high seas for deepest Kent.

Patsy, of course, has already skipped school by this point, so a teacher heads round to see her parents and find out where the little tyke is. All hell breaks loose and Patsy's mother is distraught about the loss of her beloved daughter and finally starts laying down the law at Eddie's door.

Kenny, after being harassed by his saccharine, but well meaning mother, Mrs Granger (Patsy Rowlands), reveals that he saw Patsy getting on a boat. Eddie's bundled out of the house and told to find out where the hell she's got too and discovers that the boat's headed for Kent. 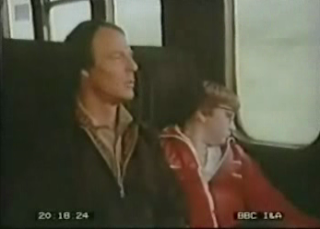 Teamed up with Kenny, Eddie is sent to chase the boat - there's no point getting the fuzz involved he reckons - and bring back little Patsy.

Break in the Sun was a novel by Bernard Ashley which had the adaptation treatment given to it by Alan England's capable and crafting hands. The 6 episode series aired on BBC1 in winter 1981 and had a repeat visit in spring 1982.

Getting himself comfy in the director's chair was Roger Singleton-Turner who would later go to direct proceedings in Grange Hill, Watt on Earth and The Demon Headmaster.

No commercial releases ever followed.

Oh What a Lovely Break!

We'd been waxing lyrical about old Bernard Ashley's writing talents on Twitter when one of our loyal and beautiful followers mentioned Break in the Sun.

So what we did was this: we jumped on our trusted information superhighwaynet and swung by YouTube to see it was available for our viewing pleasures, but it sadly yielded nothing. A gutting experience, but not one which dissuaded us from the chase. 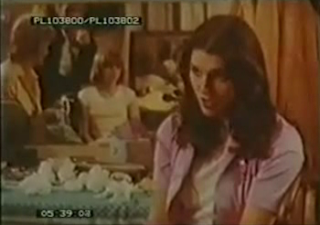 We soon found someone selling DVD copies for a not completely unreasonable price. You've got to be careful of the rip off merchants littering the web, you see, as they want nothing more than to charge £40.00 for grainy old copies of David Jason in shows before he was the household name he became.

Yeah, so we got this DVD delivered and were gobsmacked to find it had come all the way from Georgia, USA. What on Earth is someone doing over 3,000 miles away tenderly burning copies of Break in the Sun? Shouldn't they be concentrating on rare copies of, uh, My Mother the Car, or something?

We're not going to argue, though, seeing as we're pleased as punch we've got a copy of the show, but it does raise some interesting questions about the machinations of the pirate DVD business in the 21st century. Questions that, you'll be glad to hear, we won't bore your lugholes with today. Or ever. 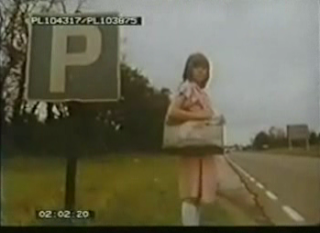 So, yeah, the actual show.

Although it's an adaptation, Alan England has delivered that trademark tone of Bernard Ashley's tales of teen alienation and the hardships that define those difficult years. And that recurring Ashley motif of running away is pumping strongly through the veins of Patsy.

Patsy's a curious little character and one who's well played by Nicola Cowper even if the role doesn't really call for too much in terms of mood. She's, not surprisingly, quite a maudlin little madam and most of her emotion is displayed by a morose look. We'd kinda like a little more depth to the main character because, as it is, all her hopes and fears seem glossed over.

However, believe it or not, the actual star, in our eyes, isn't actually Patsy. No, sir, it's Eddie aka Terry the chef from Fawlty Towers.

He's an amazingly crafted character with countless layers that we see gradually stripped away over the course of the series. He might start off as a boorish cockney thug, but when he gets teamed up with Kenny we gradually see a different side of him being revealed. 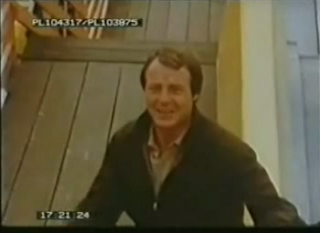 Now, Kenny and Eddie are like chalk and cheese, but it's this combination that begins to unlock the better side of Eddie's character. In between despairing about Kenny's obesity, he takes on a paternal role for the rotund redhead and begins to share insights into the rigours of growing up in his father's shadow.

And it's Kenny who finally opens Eddie's eyes to the quite gruesome truth that he's to blame for all of Patsy's shenanigans. It's a complex piece of drama to be aiming at the kids, but it's pulled off maturely and never sinks into the realms of soppy atonement - it's just your typical geezer with a few issues stored up in his noggin suddenly realising he's just a little bit of history repeating itself. 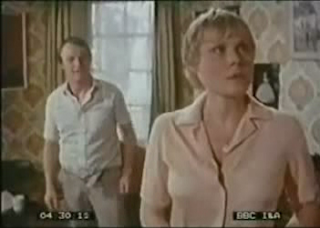 We were left tingling down our spine by Brian Hall's performance and it's a shame he perhaps isn't better known for more than his role in one of the best sitcoms ever. Mind you, it's not a bad show to be defined by, is it?

But how does the series pan out? Well, early on, we began to fear that Eddie and Kenny's pursuit - where they constantly seem to be one Kent town behind Patsy - would become tiresome, but as Eddie's whole id is slowly dissected and reassessed you can't help but be transfixed on the action.

And then there's the quite ghoulish nightmare sequence in episode 5 which feels like a bad batch of LSD which propels you into the final episode which conjures up bleak themes such as death, suicide and, finally, redemption. Hang on, is this a kids show or something by Mike Leigh?!

Special mention also has to go out to the opening theme which is like an offcut from The Who at their acoustic best.

One thing that seemed kinda disturbing to our 21st century eyes was the willingness with which Patsy clambers onto a boat full of strangers. However, you've gotta remember that this was 1981. And if you've ever read the Daily Mail you'll be well aware that paedophiles didn't exist before the dawn of the internet. 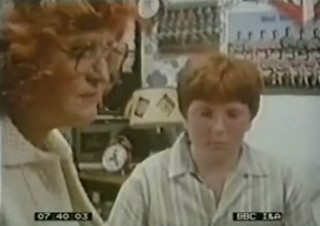 Probably the only flaw with the story is that, whilst Eddie has his road to Damascus moment, we didn't really feel that Patsy came out of the piece any wiser. Rather than realising that she can't just run away from her problems she ends the series heading towards Eddie with a tentative gait. So, yeah, it finishes with a slight whimper where it needed to deliver something a little more philosophical to the kids.

We can't fault Break in the Sun as it ticks pretty much every box on our comprehensive check list of what makes a classic bit of children's tv.

It's got that bleak edge cutting through it with an almost kitchen sink quality at its fingertips and the character of Eddie is so well realised that it's hard to believe you're watching children's tv.

And what kid can't engage with themes of alienation and just wanting to run away from all their troubles?

It's a shame that the only copy that seems to be floating about is quite low quality and we can only pray to the gods of retro TV that it gets a proper, cleaned up release one day.

***UPDATE - As of 30/10/2016, BBC Store are now selling Break in the Sun https://store.bbc.com/collections/classic-childrens-drama