The world of horticulture is one that has remained somewhat untouched by the mischievous hand of British comedy. Sure, Monty Python's Flying Circus touched upon Dennis Moore's obsession with lupins and there was the delicate world of Gumby flower arranging, but that appeared to be it.

However, after a little digging (and hoeing), I was delighted to discover a rare shoot of comedy with its roots firmly entrenched in the soil of British sitcom. And the fact that it was Richard Beckinsale's final sitcom meant I had no choice but to check out Bloomers.

Stan Partridge (Richard Beckinsale) is a down on his luck actor - despite being "the 2nd most promising new act of 1966" - who lives with the emotionally unstable, and seemingly addicted to therapy, Lena Peartree (Anna Calder Marshall) in a messy, cramped flat drenched in domestic unrest. 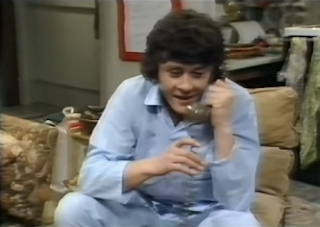 After discovering that his rubber plant is dead - apparently murdered by Lena - Stan pays a visit to a garden shop to pick up a replacement. Run by Dingley Paisley (David Swift) and the unhinged plant sympathiser George (Paul Curran) it appears to offer a lucrative opportunity for Stan to escape the constant disappointment of failed auditions.

Keen to become a useful member of the community, Stan takes up Dingley's offer to become a partner in 'Bloomers'. Naturally, with no capital rattling round in his bank account, Stan will have to work off his investment in the firm, but perhaps it could be the making of him and secure some stability in his relationship with Lena. 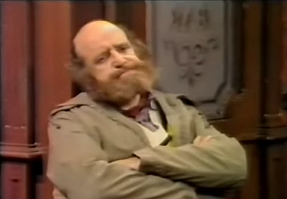 Horticultural matters, naturally, are all about freedom and the open air, but Stan will soon learn that the claustrophobic nature of man's weaknesses and imperfections will stretch his relationship with Lena and Dingley to breaking point.

Written by esteemed playwright and master of absurdist theatre James Saunders, Bloomers was a five episode sitcom which aired on BBC2 in 1979. Now, you may consider it strange that only five episodes were made, but it was meant to be your standard six episode series. Tragically, on the day of rehearsals for the sixth episode, it was discovered that Richard Beckinsale had died from a heart attack. 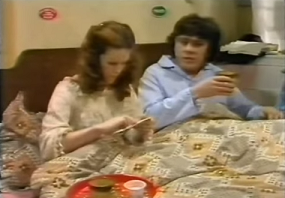 Although this acted as a glumly premature punctuation to the series, the five episodes recorded were broadcast later on in the year and acted as a tribute to Beckinsale. Bloomers may have had a sad and mournful end, but where did the show's genesis lie? Well, after spotting John Challis popping up in one episode, I tweeted him to ask what he remembered about the show and he graciously delivered this amazing nugget of sitcom trivia:

"I remember the writer James Saunders was a customer at my garden centre and he wrote a script about my experiences. I gave the script to my agent who gave it to John Howard Davies at the BBC who was looking for a vehicle for Richard Beckinsale. So Bloomers was written with me in mind but I wasn't famous enough, but Richard Beckinsale was wonderful and I got an episode out of it!"

Only one repeat of the series - consisting of four episodes - was ever aired and this came on BBC1 in August 1980. The scarcity of actual broadcasts, coupled with no commercial releases, has left Bloomers as a rarity of British TV comedy, but, thankfully recordings - seemingly from Australian TV - have surfaced on YouTube.

Richard Beckinsale's best known roles - as Lennie Godber and Alan Moore - always painted him as a somewhat doe eyed dreamer who approached the world like a lamb to the slaughter. However, Bloomers finds him playing a much more confident and able character in the form of Stan Partridge. The allure of women is clearly something that doesn't threaten him, but does run the risk of tampering with the stability of his life. 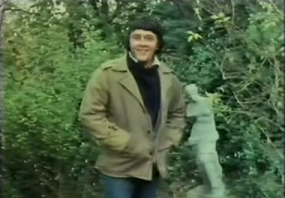 And this is why it's really interesting to see Beckinsale inhabiting such a character. It almost feels like a brave new start for the actor. Tossing off the shackles of being seen as the go to choice for wet behind the ears characters, Bloomers still finds him as an actor packed full of instantly amiable charm, but it's a more mature role and backed up the claims that he would go on to great things during the 1980s.

Positioned somewhat clumsily as a mentor who seems to have little influence over Stan, David Swift brings his rich vowels and fine pedigree as a British actor to Bloomers. Again, Swift is a highly likeable actor and his presence on our screens for 40 years is hearty evidence of how he mastered the medium. There's a charming chemistry between Stan and Dingley, but I did feel that perhaps there's not quite enough discord to engender a double act for the the ages. 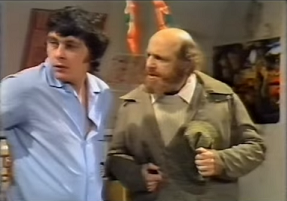 Also failing to create an engaging relationship is Lena, Stan's complex and neurotic girlfriend. Whilst Anna Calder-Marshall takes on the guise of Lena with a confident measure of the character's flaws, her relationship with Stan is an odd one. Prone to wild arguments, they seem like a couple on the edge of a severe breakdown. Now, whilst this setup can often pay comedy dividends, there's virtually no glimpses of happiness, or hints that they've ever been happy, and their relationship left me feeling a bit cold. 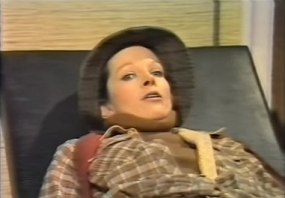 All these relationships take place against a backdrop of horticultural influenced shenanigans penned by James Saunders. And, if one thing stands out, it's the magnificent dialogue on offer. Coming from a background in absurdist theatre, Saunders ensures that there's no cut and paste dialogue from a million other sitcoms of the time. The dialogue is intelligent, peppered with philosophical musings and has a snappy rhythm which marks it out as ahead of its time.

The actual plots, though, are a bit of a hotchpotch of the sublime and the mediocre. The third episode - which sees Stan and Dingley trying to obtain Christmas trees in June - is a fantastic piece of sitcom farce and acts as an entertaining watch which demonstrates what Bloomers was capable of. Other episodes, however, struggle to match this and, whilst perfectly innocuous, they struggle to raise any sense of tension and merely amble along with a cheery smile. 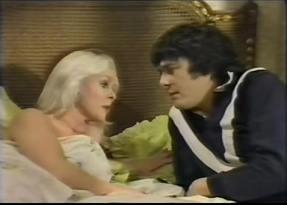 And the humour on show befalls a similar fate. Obviously, anything in Beckinsale's career is going to struggle against the might of Rising Damp and Porridge, but the humour in Bloomers is a mixed bag. There are the broad strokes of basic sitcom humour to guarantee some base laughs - although the character of George feels far too broad and caricatured - and this is mixed in with the more cerebral heady gags. It's an intriguing cocktail of humour, but not always one which goes down smoothly.

Hanging out the Bloomers

Bloomers is an intriguing sitcom and not simply because it featured the swansong of one of Britain's beloved actors. James Saunders appears to be brewing something very special with it. Sure, the emotional stakes are hardly raised and there's little resolution to the characters' plights, but there's something interesting going on. A curious concoction of clever, engaging dialogue with fantastic performances left me thinking that it was teetering on the edge of blooming into something bigger.

And, remember, it's only the first series. It's difficult for any television show to hit the ground running and, in particular, comedy finds this incredibly difficult due to the subjective nature of humour. A second series may have brought new conditions to up Bloomer's game, but this was never to be. As it is, the five episodes we're left with remain a brave and genial take on the sitcom genre. It may not define Richard Beckinsale's career, but it certainly doesn't detract from his talents either.
Posted by Telly Viewer at 5/14/2016 6 comments:
Email ThisBlogThis!Share to TwitterShare to FacebookShare to Pinterest

Andy Crane, Children’s BBC and Me… 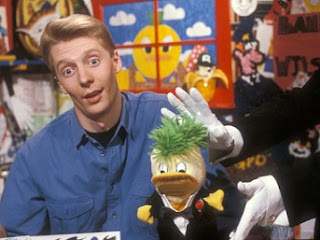 Today's blog comes from Heather Lewis a writer so amazing that, even as you read this blog, her words are being etched into stone for TV archaeologists to discover in the future!

Welcome Curious British Telly fans to my first blog post here and I’m going to start with a confession to you…I am a fan of Andy Crane! Half of you reading this now think I’ve totally lost the plot and the other half may need a little prompting, his name sounds familiar, right? If not, then please let me help you out a little bit…

In this latest delve into dusty, old forgotten VHS tape recordings I've recovered, I'm going to be presenting a series of ad breaks which may titillate those who yearn for retro chocolate bars, a young Ralph Ineson and James Nesbitt going all Star Trek and, uh, the wonders of Coloroll.

Read more »
Posted by Telly Viewer at 5/02/2016 No comments:
Email ThisBlogThis!Share to TwitterShare to FacebookShare to Pinterest

A few weeks backs I reported on the exhilarating and exciting collection of 50 old, used VHS tapes which were surely packed full of rare gems of British TV. Truth was, there was barely anything worth getting excited about, but in amongst all the dross and endless South Park episodes there was something interesting.

Tagged on to the end of a tape containing nothing but the Elvis film Blue Hawaii was an episode of the political series This Week. Fronted by a magnificently coiffured and suited Jonathan Dimbleby, it was an episode from 1987 entitled 'Drugs in Prison' and was imbued with that sense of gritty brutality the 80s excelled in.