A few weeks backs I reported on the exhilarating and exciting collection of 50 old, used VHS tapes which were surely packed full of rare gems of British TV. Truth was, there was barely anything worth getting excited about, but in amongst all the dross and endless South Park episodes there was something interesting.

Tagged on to the end of a tape containing nothing but the Elvis film Blue Hawaii was an episode of the political series This Week. Fronted by a magnificently coiffured and suited Jonathan Dimbleby, it was an episode from 1987 entitled 'Drugs in Prison' and was imbued with that sense of gritty brutality the 80s excelled in.


Concentrating on the inner workings of the drug trade at Bedford Prison, Trevor Phillips investigates the types of drugs cluttering up the inmates' lives, how these drugs manage to get past security and the long term effects of drugs in these grimy, dilapidated prisons.

In Bedford Prison, at least, it appears the powers that be are confident there's a rather limited choice of drugs on offer. Cannabis is the main culprit and doesn't sound too harmful, but come on, it's a prison. The last thing it needs is a bunch of criminals building up a powerful and lucrative drug network to stretch the prison's resources. 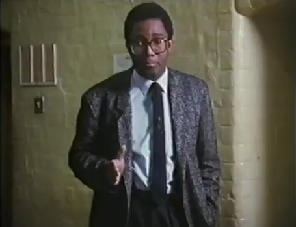 And Bedford Prison is certainly hamstrung when it comes to tackling old Mary Jane. It costs £1500 per visit to draft in the highly trained noses of sniffer dogs and Bedford Prison can only afford two visits per year. Neither does it help that prison staff are keen to run a nice little sideline in drug supply.

What with this being a snapshot of 1980s prison life, heroin and AIDS, naturally, rear their ugly heads.

Although heroin is, apparently, not part of the Bedford prisoner's drug diet, it is infiltrating the larger city prisons. And, as one prisoner reveals, a hypodermic needle can be readily passed round for a year before being branded useless. One of the fracturing side effects of this behaviour is an increased risk of contracting HIV. 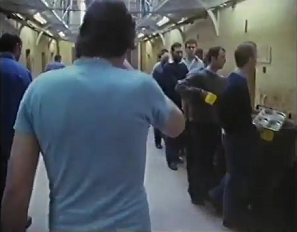 Overall, it presents a bleak view of how the government tackled the growing epidemic of drug usage in prison during the 1980s. There's little help on offer and the professionals interviewed struggle to give any coherent sense of headway being made or even possible. And, sadly, although progress has been made in 2016, the devastating effects of drugs in prison are still very real.
Posted by Telly Viewer at 5/01/2016
Email ThisBlogThis!Share to TwitterShare to FacebookShare to Pinterest