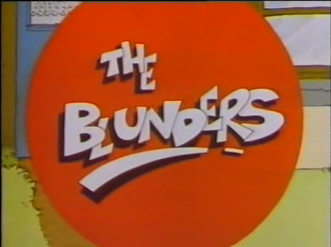 Life is often little more than a series of blunders. They're rather inconvenient, but from these blunders we can learn and modify our future behaviour to make life less troublesome. TV executives are certainly not immune to making gaffes - some even appear to have made a career from it - but what would they learn from The Blunders?

The Blunder family (Ma Blunder, Pa Blunder, Bobby Blunder, Baby Blunder, Zebra the cat, Trouble the dog and Patch the Bird) all live in bungled harmony in the curiously named town of Villa Shambles. They blunder here, they blunder there and more often than not they bugger things up. The other inhabitants of Villa Shambles tend to shudder at the sight of the Blunder family and wildly scratch at their sides to remove the metaphorical thorn that they are. 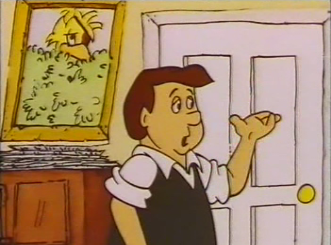 The Blunders was an animated offering by the legendary talents of children's TV known as FilmFair in conjunction with Central Television. 30 five-minute episodes aired on ITV between 1986 - 87 and all the voices were provided by that British institution known as Frankie Howerd. Wonderfully named duo Colin Voisey and Haydn Moran created the Blunder family and Ian Sachs was on hand to write the episodes. The animation was completed by Geoff Loynes whilst the artists on hand were Alison Johnston, Theresa Whatley and Deborah Johnson. The theme tune and lyrics was the result of a collaboration between Chris Stuart and Robin Lyons. Both Castle Vision and Thorn EMI Video released VHS releases.

We were trawling through a long list of children's TV shows when we happened upon The Blunders. Despite it airing when we were a cognisant child, the name rang no bells with us. A few tiny mentions of it popped up online, but no more than that and no one we spoke to had heard of it either. We discovered that it featured Frankie Howerd and this intrigued us as he had the perfect voice for children's TV. YouTube yielded no footage, but luckily, we found a shady site selling 10 episodes on DVD (presumably cribbed from one of the VHS releases), so soon had the show in our grasps. 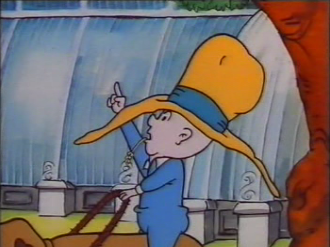 Frankly, The Blunders is nothing short of a disaster. It start wells with the zingy, brass filled theme tune and Frankie Howerd's delivery of the lyrics is pitch perfect, but then it's all downhill.

The animation is well below par from FilmFair. Can you remember those adverts in the backs of magazines which promised to turn you into a cartoonist? You'd send off a cheque (or postal order) and receive  a handmade booklet taking you through the basics of drawing cartoons. Friends and family would marvel at your 'rushing man' and 'wiseass bunny' whilst proclaiming that "Walt Disney better watch out as Colin Fletcher is now in town!". In reality, they were generic, characterless sketches with no soul and The Blunders is no better. 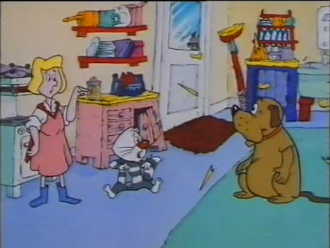 Perhaps we would forgive the amateur level of animation if the stories and gags were of such a high calibre that grown playwrights would openly weep, but, nah, plenty of dry eyes in the house. For a comedy show to work you need a little blundering, but not non-stop blundering which irritates the viewer. There's no skilled imagination trying to craft warm and witty tales here. Instead, there's just a load of titting about from characters we want to slap round the face.

Why on Earth Central Television commissioned thirty episodes of this diabolical mess is utterly beyond us. We try to find positives in most shows we look back at, but all this show did was annoy us that we'd wasted several quid on it. Still, reviewing the hidden depths of British TV was never going to be pretty. The one good thing with The Blunders is that a TV executive looked at the blunder of commisioning this show and learnt what a catastrophe it was, so a second series never appeared. Our opinion is: AVOID!
Posted by Telly Viewer at 4/19/2014 2 comments:
Email ThisBlogThis!Share to TwitterShare to FacebookShare to Pinterest
Newer Posts Older Posts Home
Subscribe to: Posts (Atom)