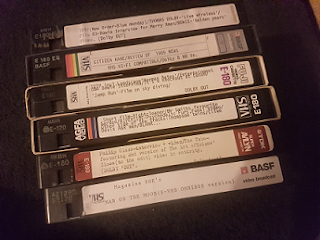 It's been another bumper month of dusting down VHS tapes and holding them up to the light of the modern day. I'm still wading through the pile of tapes I got at the start of June and they're still throwing up some intriguing finds. Progress is a little slow due to life commitments, but I've been making regular uploads over the last month and here are some of the best picks:

I usually hate long play recordings as they were pretty terrible quality at the time of recording and they seem to have degraded even further over the decades. However, this particular long play recording comes from an S-VHS tape and, even then, it's the equivalent quality of standard VHS if not slightly better. What stood out, in particular, from this batch of adverts was the body shaming antics in the Walker's Crisps advert. It made me wonder if you still get kids nicknamed 'Tank' as there always seemed to be at least one in the area when I was a kid.

Saturday meant two things when I was a youngster: NO SCHOOL and SATURDAY MORNING CHILDREN'S TV! How could you possibly argue against either of those factors not being delightfully amazing? Anyway, I was cock a hoop to find this haul of Saturday Superstore clips (occasionally interrupted by some random recordings of adverts) harking back to October 1985.

There's plenty to enjoy here from the welcome reminder that Roy Castle was one of the nicest men on television through to forgotten rockers Made in England and, finally, the pop panel which features Delia Smith and Terry Nutkins debating the singles of the week with Elton John. Saturday morning children's TV was always a curious mish-mash of features and I think these clips sum it up perfectly.

Staying in late 1985, I also dug up a section of Whistle Test including a rundown of the Top 40 for that week with Richard Skinner and, following this poptastic exploration of the public's buying habits, an interview with Nick Rhodes who is in the studio to promote his side project Arcadia.

One of the most glorious aspects of archive TV is that everything is a lot calmer and slower. This may clash with our modern tastes for somewhat hyperactive production techniques, but isn't it a wonderful respite to slip into something more sedate every now and then? Geoffrey Smith's Flower of the Month is a fine example of television tranquility which can help you forget Brexit, Facebook and reality TV for 10 minutes of bliss.

Heading way back to the start of the 1980s, I turned up this marvellous clip which features Richard Baker (voice of not just Mary, Mungo and Midge but also Teddy Edward) presenting the news headlines. Following this brief dissection of the day's events, Baker gives way to Richie Benaud who's presenting cricket highlights from the third test between England and Australia. A test series better known as Botham's Ashes...

If you want to know why I get up in the morning then finding clips such as this is a perfect example. An 18 year old Craig Charles - several years before Red Dwarf - popping up on BBC2's arts programme Riverside to beugile us with his street poetry. When I posted the clip on Twitter it caused a significant amount of interest due to, firstly, the affection with which the public have invested in Charles, but also the quality of his material here. I'd love to find more of his early TV work, several people have reminisced about his appearance on Pebble Mill at One, so I'll have to see what I can find...

So, another month of wonderful finds and, hopefully, not the last as I've still got a tonne of tapes to comb through and examine under the Curious British Telly microscope. And, if you've got any old tapes (the older, the better) then please get in touch as it would be magnificent to keep this pursuit going for as long as possible.
Posted by Telly Viewer at 7/31/2018
Email ThisBlogThis!Share to TwitterShare to FacebookShare to Pinterest