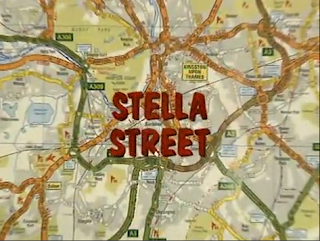 Leafy suburbia has oft been known for housing respectable, middle class families going about their mundane lives and only occasionally brightened up the odd spot of wife swapping. Surbiton in Kingston upon Thames fits this bill like a new pair of 501s, but between 1997 - 2001, one particular street was turned upside down by the high jinks of several A-list celebs. And Jimmy Hill. As you can imagine, this was no ordinary street. This was Stella Street. 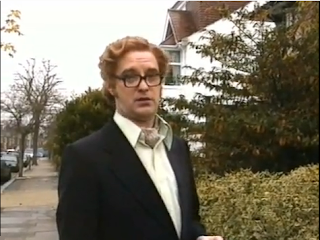 Stella Street was a mockumentary taking in the daily lives of the rich and famous celebrities who had moved to Stella Street. John Sessions and Phil Cornwell took on almost every role, but Ronni Ancona was also on hand to help out with some of the female roles. A small selection of the characters and their various plights were: Mick Jagger and Keith Richards ran the local corner shop, Joe Pesci played the local psychopath, Jimmy Hill bored everyone with his endless football chat, David Bowie needed his oven fixed, Dirk Bogarde found himself being stalked by a manic Geordie and Michael Caine tried to keep order amongst the residents whilst trying to film 'Bongo in the Congo'. As well as the celebrities, there were a few non-celeb characters in place to remind you this wasn't Beverley Hills: Mrs Huggett - A forgetful, crude, Cockney cleaner and Len MacMonotony - a disturbing, Geordie gardener with a penchant for fire and murder. Michael Caine (Cornwell) would usually talk directly to the camera à la Alfie to introduce characters and the latest goings on in the street. 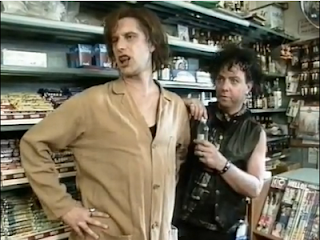 Four series were filmed over four years with the first series landing in December 1997. The first series featured 10 episodes which were each 10 minutes long. The second series followed a year later with another 10 episodes, but with an increased running time of 15 minutes each. There was then a two year gap before series three in 2000, this time featuring 11 episodes. The final series aired in 2001 with a reduced series length of just 6 episodes. All series aired on BBC2 in various late night time slots. In 2004, rather out of the blue, a made for TV movie 'Stella Street: The Movie' aired which took a look at how the starts flocked to Stella Street and then the aftermath of a 'street warming' party which threatens financial ruin for the stars. 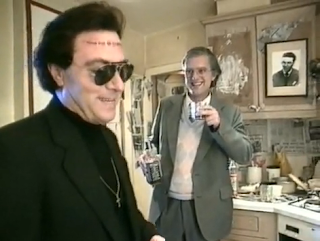 Tiger Aspect Productions were the company behind the show and on direction duties was Peter Richardson of The Comic Strip Presents fame. Sessions, Cornwell and Richardson conceived the concept of the show and were also the writing team behind it. Although being set in Surbiton, the series was actually filmed in Hartswood Road, London, W12 - fans still travel to the street to pay homage to the programme. As mentioned previously, the show was filmed in the style of a mockumentary using hand held cameras - the very first series appeared to have the look of a home movie your uncle would produce. Later series, however, possessed a more polished edge. The first three series were released on VHS and DVD, with the movie also following on DVD. For unknown reasons, series four has never seen a commercial release.

Curious British Telly are huge fans of Stella Street. The first series was fairly well advertised, but as it arrived on our screens over Christmas, I found myself too busy to watch it until the final three episodes. Those episodes, though, were hilarious and I was really taken by the low rent and surreal edge the show had. The juxtaposition of banal, everyday life with glamourous celebs really captured a unique strand of humour - for example, Michael Caine preparing a roast lamb dinner for Joe Pesci's mother and having his pride dented when she rejects it is priceless comedy. Pathos was also present, constantly bubbling beneath the veneer of several characters - Jimmy Hill appears tortured by loneliness and his desperation to connect with others is truly tragic. The main power behind the show, though, is surely the magnificent impersonations - something that could have sunk the show if they haven't come off. In fact, it's a testament to Cornwell and Sessions abilities that they're still plying their trade on mainstream television. Producing the show in 10 - 15 minute nuggets was also a shrew move as it kept the concept snappy and fresh - the TV movie suffered due to its length which had the effect of watering down the show's concept. 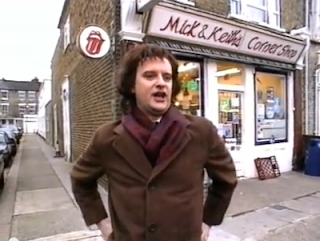 Despite it's genius, the show was fairly overlooked by the general public - although Damon Albarn declared his love for it on the main stage at Glastonbury 1998. Why it was overlooked is difficult to determine - the late timeslot and explicit language probably contributed, but it retained a dedicated cult following throughout - Curious British Telly remembers once stumbling across a Stella Street website where the members had met up and hosted a Zulu party as per Michael Caine in series 1 - truly the sign of hardcore fandom. The show was rewarded with four series though, so someone in the upper echelons of the BBC was obviously a fan. 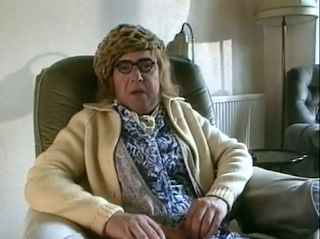 Curious British Telly thoroughly recommends the first two series to anyone reading this blog as it's a delightful and wonderfully British piece. By the third and fourth series, however, it seems to have run out of steam. Unsure of what to do with the characters next, the writers place them in increasingly bizarre scenarios and frequently venture away from the hallowed confines of Stella Street. Series two can also be accused of this to some degree, but the balance between everyday foibles and the absurd was just right. We gave up on Stella Street early on in series 4 when we saw Mick Jagger dressed as Ali G and trying to be street - maybe not that unusual for Mick Jagger to be doing, but it was a step away from what the charm instilled in the earlier series.
Posted by Telly Viewer at 1/31/2013
Email ThisBlogThis!Share to TwitterShare to FacebookShare to Pinterest