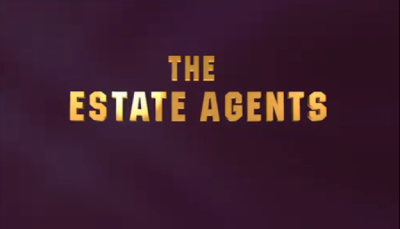 2002 saw the UK slap bang in the middle of a housing boom where prices were sky rocketing and mortgages were being flung at those with ridiculously poor credit ratings. Earnestly helping to guide homeowners to the house of their dreams were courageous and, to say the very least, exceptionally trustworthy estate agents. Contributing towards the eventual collapse of the housing market towards were three talented individuals working at Embassy Properties in London. Together, they were known as The Estate Agents. 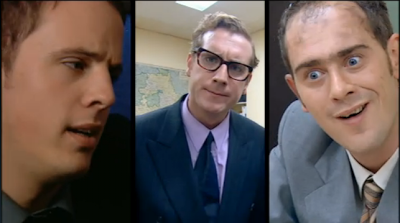 Working from a cramped office in South London, The Estate Agents was a Channel 4 sitcom which followed the unfortunate and somewhat surreal adventures of Mark England, Mark Devlin and Jerry Zachary. Mark England (Cliff Kelly) is a professional, upstanding chap and obviously gay - although very few of the other characters cotton on to this. Mark Devlin (Adam G. Goodwin) is portrayed as an incompetent, unlucky 'goon' who possesses an unhealthy attraction for violence. Jerry Zachary (Dan Clark), meanwhile, epitomises exactly what being a duplicitous, unscrupulous estate agent about town is all about - sex, drugs and a one bedroom terrace house just perfect for a family of five. In charge of this trio of malcontents is the dodgy - and potentially dangerous - Tony (Mark Arden) who has many famous friends and no doubt uses the shop as a front for something else. Also making regular appearences is Roy Dance (Barry J. Gordon) - a deceased estate agent who Mark England often reminisces about. 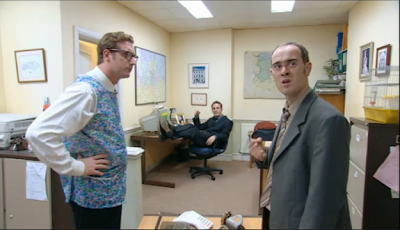 Episodes usually saw the trio getting themselves into precarious situations involving dodgy properties on their books, Tony requesting the team carry out a task and Mark Devlin usually coming a cropper. As with most sitcoms, these setups - more often than not - are accompanied by hilarious consequences. Despite reading like a traditional sitcom, The Estate Agents plots had a surreal edge to them - one episode features Tony selling a Bolivian six legged mountain cat to Michael Jackson. There were also heavy lashings of violence which often came knocking at the face of Mark Devlin. Running gags were sprinkled through the series and these took in Jerry's outlandish excuses to get the angry customer Mr Tent off his back, Mark England remembering Roy Dance's manic wisdom and Jerry's liberal use of the word 'goon' and the Cockney rhyming term 'a donald'. 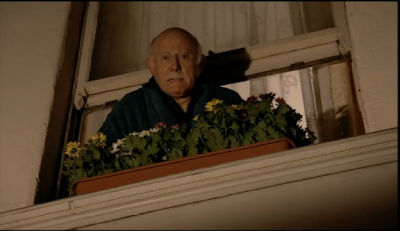 The Estate Agents was conceived by the writer/performer team known as Electric Eel. By a happy coincidence, these just happened to be Dan Clark, Adam G Goodwin and Cliff Kelly - always a boon when it comes to sharing out the commissioning fee. After a few years of working together, Electric Eel were lucky enough to snap up one of the prestigious slots on Channel 4's Comedy Lab showcase series. Their effort was an early incarnate of The Estate Agents which went under the name of Roy Dance is Dead and was produced by Angel Eye. Essentially a pilot, Roy Dance is Dead aired in 1999 and impressed Channel 4 enough to commission a whole series.

The Estate Agents finally hit the air in February 2002 running for six episodes in the 11pm slot on Thursday evenings. Reviews for the series were mixed and Dan Clark has even stated that "a lot of people hated the show". Scripts were written for a second series, but sadly the show was never recommissioned. Channel 4 found Peep Show just over a year later, so I guess they didn't have too many sleepless nights over abandoning The Estate Agents. Perhaps due to the lack of success, a DVD was never released, but the series lives on as part of 4OD's programming. The pilot episode is also available on YouTube. Curious British Telly caught a couple of episodes of The Estate Agents when it aired - being 19 at the time, 11pm on a Thursday night usually meant I had been out drinking with my mate Sam. Therefore, The Estate Agents will forever be connected with youthful drinking and having a damn good laugh.

Several years later, Curious British Telly met a mysterious, but beautiful stranger on the internet called Alan who passed us an unofficial DVD of the series. Unfortunately, it was scratched and wouldn't play, but Alan soon got another copy out to us which worked just fine. Rewatching the series after several years, my initial thoughts were that I was surprised there was never a second series.

The dialogue between the three main characters is always very snappy and the timing is spot on - it's easy to see they've been performing together for several years. Additionally, whilst The Estate Agents doesn't possess the most sophisticated strand of humour seen to man, it's still got a likable, irreverent charm which manages to hit some manic heights. In some ways it's got a strong influence from The Simpsons as the cartoony feel to the show is pushed to the fore - for example, the bouts of frequent violence are rarely taken seriously and impossible feats of physics are commonplace.

After watching the series and having a think, though, the cartoon edge does begin to blunt the characters emotional cores, so you rarely feel for them. Mark England is perhaps the most likable, but even then, you barely scratch the surface of his no doubt 'in the closet' angst. It's one of the few negatives that Curious British Telly has about the show, but highlights one reason why the viewing public didn't hold it close to their dear breast. However, if you want a quick burst of easy going laughs, then head over to 4OD and get streaming.

This bizarre surreal new comedy series – imagine The League of Gentlemen meets The Office – will doubtless be an acquired taste for many. But Channel 4 has a fine record for edgy, barking-mad sitcoms (just think of the wonderful Spaced and Black Books), so it’s at least worth a look.

The estate agents of the title are three very odd men who work from a run-down office. Here, they are at the mercy of the business’s psychotic, sex-obsessed owner, played by Mark Arden. In tonight’s opening episode, they are put under pressure when a rival, very groovy estate agents opens up around the corner. Abode, as it is called,  has everything: “a cappuccino bar, chill out area and a resident DJ”.

Naturally our estate agents’ business plummets, so they have to find ways of winning back their customers. They fight back with a dirty-tricks campaign.

The actual “plot” matters little: it’s the individual mad moments that count, such as the hopelessly out-of-date estate agents’ training video, and the efforts of one of the estate agents, who has both legs in a splint after being shot in the knees, to show a couple round a house. It’s all very nihilistic, but it’s fun. One to watch.
Posted by Telly Viewer at 1/25/2013
Email ThisBlogThis!Share to TwitterShare to FacebookShare to Pinterest