5 of the Best British Comedy Sketches You Don’t Remember 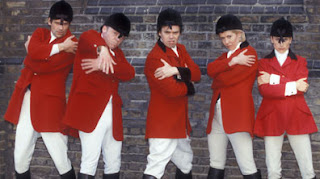 When we're not drowning our sorrows over "what we coulda been, man!" in the deepest depths of gin hell, we're more than likely to be found lamenting the death of the great British sketch show.

Yeah, we used to love them crazy little sketch guys with their bite sized three act narratives designed to give us quick comedic bursts one after the other before our attention buggered off elsewhere.

But, despite the mid 00s success of The Catherine Tate Show and Little Britain, the whole genre seems to have disappeared quicker than our dignity on a Friday night. Sure, Cardinal Burns is pretty damn hilarious and if we had our way WitTank would have their own TV show and tie in annual, but they're in a moribund minority.

When the future's bleak, though, we here at Curious British Telly retreat backwards ever more into the rich recesses of British TVs past for a little bit of cultural salvation. And, blimey, ain't there just a bucket load of comedy sketches lurking there which are bloody amazing!

Problem is that, despite what them 'comedy gurus' say, there is actually a limit to the amount of times you can watch the 'Four Candles' sketch (does anyone even know how that ends?), so we're going to take you through 5 of the hidden gems of British sketch comedy you don't hear enough about. But bloody well should.