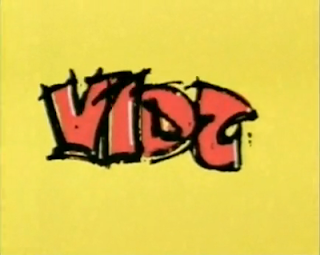 Before we begin, younger readers (if there are any) may not be aware what a video is or even what a video store is. Well, if you can imagine illegal torrents in a physical state the size of your head and then being sold, not on Amazon, but in a poky shop, then you're ready to appreciate the manic genius of Vids. 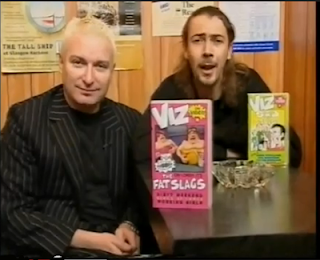 Vids was a late night review show which took a look at the latest videos/DVDs to hit the shops. The show aired as part of Channel 4's 4Later strand which also included the computer game show Bits. Fronting the show were the tall, hairy Scotsman known by his name of Stef Gardiner and the manic, peroxide Welshman Nigel Buckland.

Both devotees to the curiously wide scope of what was lurking within the twin wheels of VHS tapes, the pair worked from a fictitious video store based in Hamilton where they would deliver in-depth, but sometimes corrosive reviews of what their eyeballs were dragged through. Nige would attempt to arrest viewers' attention with an aggressive manner which almost made the camera shake whilst Stef was more sedate, like a softly spoken Barry Norman on mogadon, if you can imagine such a thing.

Life, in Vids, wasn't merely contained to the video store though. A number of locations were employed with a cheap and cheerful vibe to help give the show an eccentric edge, but still feel like you were chatting to a couple of mates down the boozer - in fact, many reviews were carried out at the pub.

The reviews contained the seed of genius, but it really bloomed when we ventured into the surreal mindsets of Stef and Nige. In between the reviews, there were often little sketches based upon the films they were reviewing and advocated the fact that film review shows didn't have to be such serious, high brow affairs. Sometimes these short interstitials may have simply involved an anarchic sequence where Stef drives a car into Nige, but it created a sense of quirky rebellion against the establishment of prime time television. 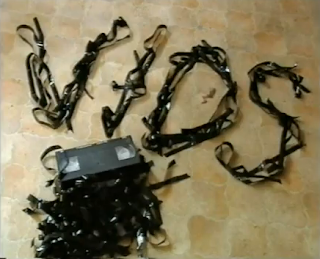 A total of six 12 episode series' were produced between 1999 and 2001 by the Scottish production company Ideal World Productions. Stef and Nige were the only constant characters in the series, but occasionally there would be supporting characters popping up such as a gimp, Nige's brother Lingus (also played by Buckland) and even Aleks Krotoski - one of the presenters of the aforementioned Bits. The show was filmed in rather run down areas of Hamilton, Scotland - recently revealed as the murder capital of Scotland - which helped to contribute to the low rent feel of the show. 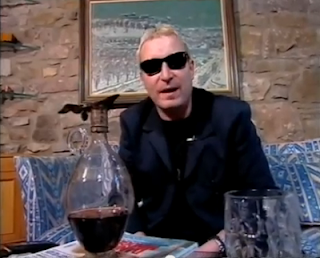 Curious British Telly were firm fans of Vids when it originally aired. We remember those halycon days of being on the dole and staying up to catch an episode. If we were employed then we fiddled about with VideoPlus+ and prayed it didn't cut off the last five minutes. Anyway, the internets hadn't quite hit the mainstream yet, so Vids was important in teaching us about the undiscovered world of cinema lurking out there.

Stef and Nige managed to a draw a world where the pomposity of cinema could be punctured and leave, in its place, an accessible world of delights for the everyman. Not only was there a sense of unhinged and hilariously absurd humour on display, but Stef and Nige - tucked away in this curiously attractive low-rent universe - managed to create an allure for the unknown with rowdy aplomb.
Posted by Telly Viewer at 1/27/2013
Email ThisBlogThis!Share to TwitterShare to FacebookShare to Pinterest