One of our favourite memories of the 1990s was of Euro 96 where Frank Skinner and David Baddiel's strangled vocals floated across the air with Three Lions. As we repeatedly played our cassette of Three Lions, we were completely oblivious to the fact that Frank Skinner had taken on a singing role before. Back in the heady summer holidays of 1994, Skinner had been Blue Heaven. 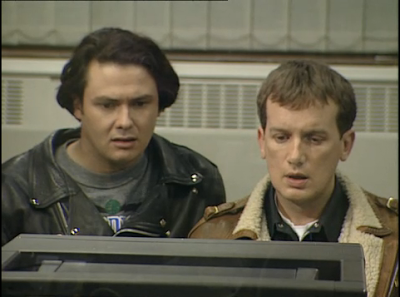 Frank Sandford (Skinner) and Roache (Conleth Hill) are the struggling, long term unemployed members of the West Midlands least known cabaret duo, Blue Heaven. They play in such esteemed music venues as The Fox and Serial Killer whilst dreaming of the big time. Frank also has to put up with his ever bickering parents who he resides with - a loud and aggressive Father, Jim (John Forgeham) and a loud and aggressive Mother, Ivy (Paula Wilcox). Frank frequently speaks to the audience, acting as a narrator throughout

Blue Heaven was a six part series airing on Channel 4 in 1994 on a Saturday evening. Skinner took on the busy roles of writer and lead actor in what was his first solo starring vehicle. In an interview with The Independent in 1995, Skinner revealed that the series was "a love-letter to the Black Country in a lot of ways" and added that it was a reflection of his feelings towards his parents who had passed away. 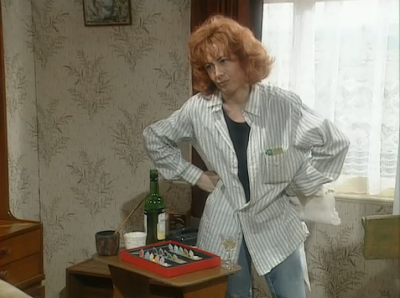 Curious British Telly are huge fans of Frank Skinner, so sat down to investigate Blue Heaven with some intrigue. We had had previously watched Skinner's other sitcom, Shane, which aired in 2004 on ITV and had been suitably impressed. Blue Heaven doesn't match up to the quality of Shane, but certainly has some merits.

Skinner is never going to win any 'best actor' awards, but he manages to play the everyman pretty well in Blue Heaven. Much like his standup persona, he's able to project a likable persona on to Frank Sandford. Saying that, he does, at times, seem to struggle where there's a need for heightened emotion. Again, like his standup, the humour is always accessible, no matter how crude it can be.

Sadly, the humour in Blue Heaven isn't as strong as Skinner's standup. Sure, there's a few laugh out loud moments, but on the whole, we'd only class it as tittersome. The relationships between the characters aren't exactly well developed either - everything comes across a bit paper thin. A more emotional output between Frank and his parents would have given the show some much needed depth. 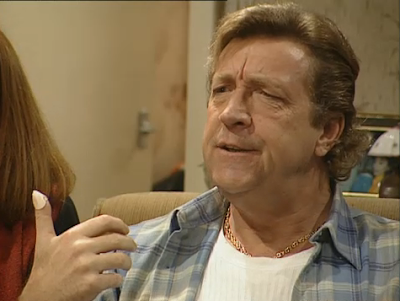 In summary, Curious British Telly feels that whilst Blue Heaven is a likable show it's just not strong enough. It's got an obvious laddish edge with its frequent mention of birds and football, but we feel that other contemporary shows such as Men Behaving Badly and Game On did this thing much better. We're not surprised there wasn't a second series, but it's still a decent first attempt by Skinner.
Posted by Telly Viewer at 2/16/2013
Email ThisBlogThis!Share to TwitterShare to FacebookShare to Pinterest