5 Sketches That Prove Hale and Pace Were Funny 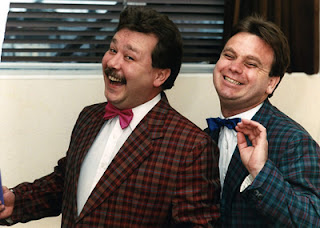 Back in the late 80s, the promise, for me, of watching an episode of Hale and Pace was one that was charged with a certain frisson. After all, to a pre-pubescent squirt, Hale and Pace was packed full of the type of smut and silliness which defined not only our own age bracket, but plenty of adults who should have known better.

Therefore, it came as quite a surprise, in my later years, to discover that Hale and Pace was looked down upon as cheap, tacky nonsense. In fact, one particular comment on a forum which caught my eye stated that it was "Lazy, poorly-written, poorly-timed, poorly-constructed shite that builds toward a punchline that's straight out of Smut comic".

Harsh words indeed, but was it that terrible? Well, as with all sketch shows, they're a bit hit and miss, but surely you'd have to be carrying out some right terrible shenanigans with the television commissioners to rack up 10 series of non-stop, grubby bilge, right? The answer, in regards to whether they were awful (their backstage antics remain a mystery) is, in fact a resounding "NO!".

And here's 5 sketches that prove Hale and Pace were funny.

1. The Man Who Can't Take Anything Seriously

Perhaps I can relate to this sketch a little too much and perhaps it explains why my constant lack of maturity rubs people up the wrong way.

However, when this outlook on life is shone through the prism of a sketch show it becomes a fantastic example of why we need to stop being a bunch of old stiffs. And, in technical terms, it ratchets up the absurdity of the situation with increasingly exaggerated scenarios for Gareth Pale to keep the laughs coming one after the other.

Hale and Pace frequently tackled the comedic potential of them Northerners of our fair British Isles, but it was perhaps best done in the Yorkshire Airlines sketch.

Acting more as a celebration of the indigenous flat cap wearing folk of Yorkshire than a series of catty barbs, it's a sketch which is peppered with fantastic touches. From the aggressively matter of fact air hostesses, through to Captain Boycott and the sophisticated 'Alan Bennett' class, the broad (yet hilarious) comic gems rain down before being crowned with a punchline which punctures regional pride and stubbornness.

Along with 'The Management', Billy and Johnny were the best known recurring characters in Hale and Pace. Sure, it's a pretty straightforward excuse for easy juxtaposition, but, come on, it's bloody funny at times and what kind of a planet would it be without mindless japes?

Anyway, one of my favourite Billy and Johnny sketches sees their saccharine sweetness being contrasted with the seedy joys of Soho. It's packed full of smut, so certainly won't win round any critics of Hale and Pace, but it's the most innocent and rib tickling smut you can imagine. And whoever thought they'd live to see the day where Ainsley Harriot was larking about with a blow up doll?

Visual comedy is a difficult niche to pull off successfully, but when it's done right it can be a glorious celebration of the base mechanics behind comedy. And Hale and Pace pulled this off with some aplomb when tackling that national institution known as the Great British Builder.

Okay, it's just a series of visual gags rather than a condensed three act narrative of comedic elan, but they're charming little slices of glee which hint at some seriously creative writing. Again, it's a little mocking towards the building trade, but it's executed with such silliness that I doubt any brickies are going to be openly weeping.

Awkward social encounters are an integral part of Britishness and the medium of sketch comedy is a perfect opportunity to underline this particular quirk.

And this Hale and Pace sketch captures the very essence of British awkwardness which everyone has experienced at least a couple of dozen hundred times. It even manages to capture the awkward 'time standing still' sensation despite being just over a minute long, but it's true beauty comes from an engaging nature forged in the relatibility of its core subject.

So, yeah, in conclusion, Gareth Hale and Norman Pace were a right funny pair of chaps, so let's celebrate them a bit more, okay?
Posted by Telly Viewer at 7/01/2016
Email ThisBlogThis!Share to TwitterShare to FacebookShare to Pinterest