As a child, enthused by the antics of Data in The Goonies, I became briefly obsessed with the exciting world of inventions. Much like Data, though, my inventions were useless, really useless. The only one that I can remember clearly was my grand invention which would open the drawer next to my bed AND my wardrobe door at the same time.

Why I needed to open both of these at the same time, I couldn't tell you, but it was something that felt aspirational and achievable. And, with a piece of string tied to both of them, I was able to reach my goal in a very low tech fashion. I quickly realised, however, that it wasn't going to advance mankind's progress or even my own, so snapped the string and decided to leave all that inventing lark to someone else.

And, in particular, there was one little inventive guy in the form of Bill the Minder who would put me to shame with a quite literal childlike ease.
Genre: Children's
Channel: ITV
Transmission: 17/02/1986 - 07/03/1986

Bill's a teenage chap for whom family is an important cornerstone of his life. And, one day, when visiting his Uncle Crispin, he finds Crispin in a bit of a malaise with his chief issues stemming from a mixture of depression and the subsequent obesity. 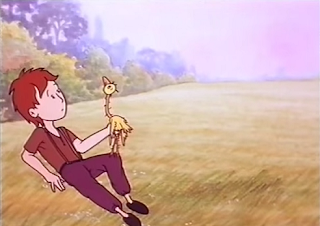 Not wanting his Uncle to suffer, Bill decides to build a contraption which will allow Crispin to lose a bit of weight and regain his spark for picking mushrooms. Also, to mark himself out as a real standup guy, Bill offers to take charge of his cousins Boadicea and Chad to lighten the load on his Aunt and Uncle.

It's with Boadicea and Chad that Bill will wander the surrounding countryside and encounter a number of curious characters such as an unhappy king desperate to get back to his kingdom, a Sicilian cleaning lady who can't stand her employees and a respectable gent who owns a belching green toed button crane of Barraboo.

Together, this melange of wandering folk will pool their resources and skills together to help each other out. And, if this doesn't do the trick, they can always fall back on one of Bill's inventions.

Based upon the 1912 W. Heath Robinson book of the same name, Bill the Minder was a 15 episode series produced by Central Television and animated by Bevanfield Films who also animated shows such as What-a-Mess, Murun Buchstansangur and Just So Stories throughout the 1980s and 90s.

Episodes of Bill the Minder ran to just under 5 minutes each and were broadcast on ITV over the course of three weeks (with episodes airing Monday - Friday) in early 1986. A VHS of the series was released in 1987 by iconic 80s VHS publishing house Channel 5, but has never made the great leap to DVD. 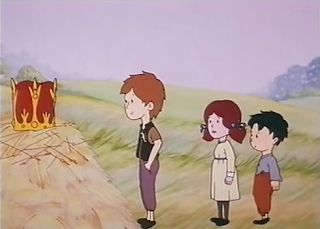 Narrating the episodes was a young Peter Chelsom who has gone on to carve out a successful directing career over in the glittering hills of Hollywood. Adapting the original W. Heath Robinson tales was Timothy Forder who contributed heavily to most of Bevanfield Films' output in various capacities.

I can't recall ever watching Bill the Minder, but when I stumbled across the title, small beads of sweat started to rapidly congregate on my twitching temples. As my heart rate quickened to that of an Olympic athlete, I began to hope that I'd found a crossover spin-off of The Bill and Minder.

Just imagine how amazing that TV show would be! Arthur Daley and Burnside running a nice line in knocked off police radios, Tosh drunkenly stripping in The Winchester Club and Terry McCann battling Jim Carver for the romantic affections of June Ackland!

Sadly, this dream TV show would have to remain a wild fantasy (for now) as Bill the Minder turned out to be a very different, but not unwelcome proposition. It was, in fact, a mid 1980s children's TV show, so still more than capable of wrestling my attention to the floor in a particularly nasty boston crab. 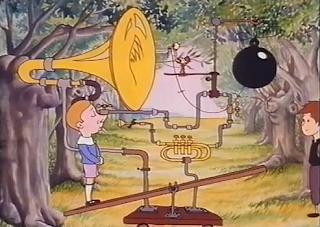 So, it's an animation, is it? Well, better start there then, so what do we have in Bill the Minder? Well, uh, the backgrounds crafted are very nice and detailed. Unfortunately, the actual characters are crudely drawn and feel too generic, so they're difficult to invest in and children don't half need a bit of aesthetic cuteness as a bargaining chip to get on board with cartoons.

To make matters worse, Bill and his cousins are virtually faceless due to the lack of personality imbued in their little faces. Again, this makes the characters a bit of a struggle to engage with and it's particularly alarming when this fact is applied to the titular hero of the piece.

Maybe, though, Bill's personality will shine through and render my previous grousing utterly redundant.

It'd be nice if that was the case, but, instead, Bill's vacuous design spreads further down into the soul of his character. Sure, he's a nice enough kid, but who is he, what are his loves, where's he going? He's a vague outline of a character with some random inventor flourishes dotted around him and, half the time, he gets shunted to the narrative sidelines by the adult characters. 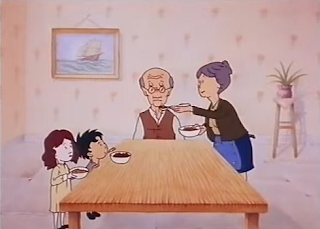 Okay, he does knock up plenty of inventions (albeit all variations on a fishing rod, cogs and pulley systems) which help the adults, but this all seems rather shoehorned in to give the children watching something to relate to. Admittedly, Bill's eagerness to help all comers does have some merit as it helps to underline the stories main thrust of helping your fellow man, but the 'minding' angle seems lost in amongst his anonymous cousins.

Although, the more I think about it, Bill's propensity for helping people is sometimes a little bit bloody minded. Take, for example, the doctor who's down on his luck due to all the townsfolk being too healthy, Bill's answer appears to be germ warfare to improve business down at the doc's practice. And Bill gets that poor cleaning woman sacked, so I'm not sure what we learn from this short of: don't be a dick.

Still, they're mildly diverting tales, but at their short length, they really shouldn't be anything less than amiable little narratives. They're hardly startling demonstrations of storytelling skill, but there's enough curious characters and gentle romps to titillate the attentions of the under 5s, but, for some reason Bill the Minder aired in a 16:10 slot which feels like a terrible mismatch if ever there was one.

Time for a Petition?

Will I be setting up a petition for MPs to debate the merits of a DVD release for Bill the Minder? Of course I bloody won't! It's not a show which particularly offends me (and Christ knows The Blunders did) but Bill the Minder fails to excite me in a way which generates even an ounce of interest, simply tonnes of apathy.

It's all up on YouTube, though, if you watched it as a kid it may be worth returning to. Otherwise, maybe you could try inventing something better, but please don't ask me and my string based limitations to get involved.
Posted by Telly Viewer at 7/31/2016
Email ThisBlogThis!Share to TwitterShare to FacebookShare to Pinterest