Tales from the Poop Deck

Life on the Seven Seas must have been a captivating and intriguing affair in those crazy days of maritime high jinks so readily linked with the 18th Century. After all, those dashing Royal Navy chaps looked pretty cool wielding their cutlasses like phallic representations of war and pirates were fiendish rebels who liked getting smashed on rum and bellowing out bawdy sea shanties.

Naturally, with these marauding gangs cluttering up the oceans, it's inevitable that they'd rub eyeballs with each other and, no doubt, try and impale their opposite number on a less than clean blade; worryingly, many of these chaps would fail to get a tetanus shot before embarking on their seafaring adventures. And all this rather negative bunkum meant that it was rare to find them arm in arm down the local tavern.

What if this lack of harmony, though, was suddenly reflected through a prism of love? It would certainly make for some compelling viewing as differences were thrown aside as rapidly as the involved parties' pantaloons. And, let's derail all sense of normality by flinging an ex Bond villain hot on their trail. Done that, have you? Great, that means you're beginning to get to grips with Tales from the Poop Deck.

Shored up in Kingston, Jamaica, the Royal Navy ship, HMS Intrepid, is preparing to raise anchor and head back to Britain packed full of taxes for the motherland to feast upon. However, Captain Henry Stallion is a little perturbed by reports that pirates are operating in the area. With the help of professional silly sod Petty Officer Coleridge (Paul Shearer) and the intelligent, but conniving Lieutenant Parkinson (Colin McFarlane), Stallion hopes for a smooth passage across the Atlantic. 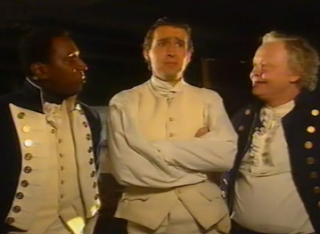 Meanwhile, over at pirate ship the Sea Cow, despite rumours that they've retired from piracy and gone into landscape gardening, Connie Blackheart (Helen Atkinson Wood) and her crew (the most feared and bloodthirsty gang of cutthroats in the Caribbean) are planning a raid on HMS Intrepid's glittering contents.

And it's a raid which will not only see Blackheart capturing a chest of gold and Coleridge, but one which will spark a romance between Stallion and Blackheart. It's a dangerous proposition, but then the course of love never did run smooth. Making matters worse, Stallion is forced to inform his easily irritated uncle Dennis aka Admiral De'Ath (Charles Gray) that their haul has been hijacked. 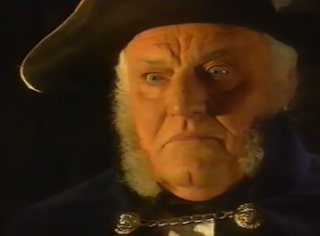 Whilst De'Ath's rage is a fearsome beast, both the crews of the Intrepid and Sea Cow also need to battle sea beasts from deep within the ocean's belly, explore the mind bending effects of Treasure Island on Ben Gunge (Chris Langham), contend with marauding cowboys and question the ethics behind the slave trade. It's a right load of shenanigans, but in the name of treasure and love, those seafaring chaps will do their utmost to succeed.

Tales from the Poop Deck was a six episode series which aired on ITV as part of the CITV strand in Spring 1992. The series was shown a few weeks later on Channel 4 in a slightly later 6.30pm slot, but this would prove to be the final outing for the show.

The writers, Lenny Barker and Vicky Stepney, had previously written on Smith and Jones so it comes as no surprise that they were able to gather together Griff Rhys Jones and Mel Smith to contribute towards Tales from the Poop Deck.

Chris Langham, who also appears in some small roles throughout the series, received his first TV production credit on Tales from the Poop Deck.

Tales from the Poop Deck isn't a show which showed up on my televisual radar back in 1992, but I stumbled across the opening credits on YouTube recently and had my interest piqued. Here was a sitcom for the kids and, crikey, it didn't half have an outstanding cast attached to it. The writers didn't appear to have much history, but, what the hell, it sounded like it was worth my time. 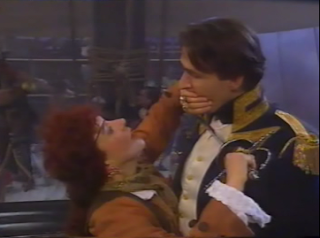 I duly located myself a copy, uncorked a bottle of rum and prepared to have my timbers well and truly shivered.

The cast, obviously, is the most eyecatching aspect of Tales from the Poop Deck's initial premise, so lets cock our eye towards the cast list. It's a remarkable set of actors and I can only assume that there were supernatural forces at play to ensure such a window came up in all their schedules.

Not only have you got Helen Atkinson Wood (forever known as Mrs Miggins from Blackadder), but you've got Dudley Sutton who was, at the time, riding high as Tinker Dill in Lovejoy, Paul Shearer (The Fast Show), Griff Rhys Jones as the narrator, his erstwhile colleague Mel Smith in a quick cameo role, Colin McFarlane (The Fast Show) Chris Langham, Norman 'Desmond' Beaton and, yes, Charles Gray aka Bond supervillain Blofeld. 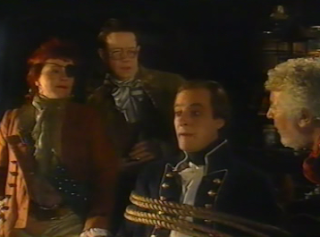 It would make for an amazing lineup in an adult sitcom, but for a children's sitcom it's stratospheric in terms of its reach. And the acting is undeniably excellent with everyone putting in a tremendous effort, perhaps most impressive is Charles Gray whose face is jam packed full of explosive power meaning that a mere lip curl becomes a scene changer.

So, the writers, Lenny Barker and Vicki Stepney, were spoiled with a haul of fantastic actors, but how would their writing fare?

Well, it's not the most rollicking of yarns. Sure, we get to see the treasure going backwards and forwards nicely with a couple of nice diversions thrown in such as the cowboy bounty hunters, but it's difficult to get invested in it as the action gets monotonous with endless ship scenes and characters constantly getting captured by their opposite numbers. It brings a numbing tediousness to the show and, after two episodes, I found myself wondering whether I should abandon the whole thing. 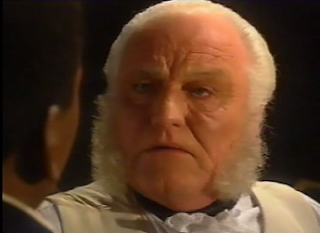 I persevered, though, and in episode 3 things seem to perk up as the various parties adventure through Treasure Island, get double crossed by cowboys and De'Ath demands that his errant staff are hunted down and made to pay for their betrayal of the Navy. It genuinely felt like a turning point, but things fail to reach these swashbuckling highs again and, instead, we're force fed further prisoner scenes and less than dynamic fight scenes. 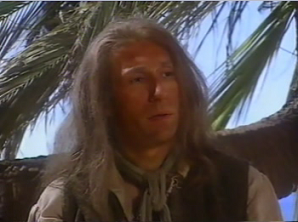 In defence of the plots, however, I have to give the writers some real kudos for their efforts in episode five with regards to Lieutenant Parkinson's plot strand. Painted as a deceptive agent working purely for himself, he completely sidesteps this path by revealing that he's been striving to capture the treasure and put it to good use. You see, the treasure is made up of the proceeds from the Antigua slave trade and Parkinson wants this money, instead, to be used to help slaves in the Southern USA escape to the less oppressive North.

It's a wonderfully altruistic twist and one which started to reshape my opinion on Tales from the Poop Deck's narrative. Also, we finally see the chemistry between Stallion and Blackheart take flight and their genuine love for each other promises a happy future together on the high seas. It would have made for a fantastic episode to go out on, but the writers had other ideas... 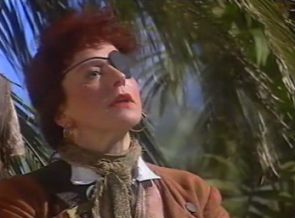 Unfortunately, episode six acts as a needless epilogue which finds Stallion and Blackheart tying the knot back in Britain. Okay, it's a sweet touch, but the writers take this notion and twist it into an excuse to reveal Stallion as being nothing more than a massive tosser. It feels like a lousy move by the writers after we've invested time in Stallion and Blackheart, plus it seems to condemn any sort of acceptance of love across barriers. 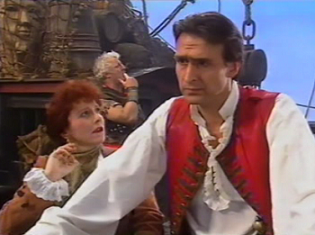 So, yeah, I wasn't very keen on the narrative despite its ability to occasionally sparkle. What's even worse is the comedy on offer. Now, with the cast in place on Tales from the Poop Deck, you'd expect the scripts to be packed full of amazing dialogue to tumble out of their gobs, but there's barely a titter. I found myself desperately willing each line of dialogue to deliver a fantastic punchline, but what I found, well, they weren't even trying to be gags. And, I know that comedy is incredibly hard to write, but a comedy which fails to find the funny soon becomes a struggle. 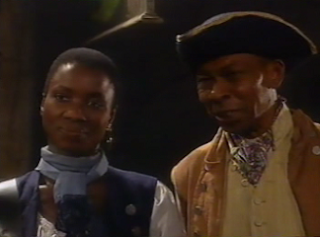 Not that there's nothing mirthful about Tales from the Poop Deck. Paul Shearer's bumbling twit Coleridge and Chris Langham's barmy Ben Gunge provide light relief, but neither of these characters are supposed to be the heart of the show. Sadly, the two main leads - Stallion and Blackheart - fail to deliver much funny and Charles Gray's interminable rage begins to be feel tired very quickly.

And, as the end credits rolled on episode six, I found myself with timbers which had resolutely not been shivered, not even slightly trembled by Tales from the Poop Deck. Still, that rum tasted good.

Tales from the Poop Deck is packed full of potential, but it's glittering cast is sorely let down by a script which is below par and lacks any real sass. Sure, there are glimmers of excitement scattered throughout, but they're too scarce and, unfortunately, Tales from the Poop Deck is a comedy which simply isn't funny. It's a failure where perhaps it could have breathed the same air as Maid Marian and Her Merry Men, but, on this occasion, it's scrabbling round on the floor for breath.
Posted by Telly Viewer at 7/09/2016
Email ThisBlogThis!Share to TwitterShare to FacebookShare to Pinterest