Tales of the Rodent Sherlock Holmes 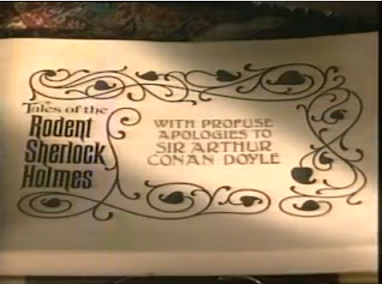 Has anyone amazing ever taken on the role of Sherlock Holmes?

Let's just think about this for a second. Well, there's...

However, there's one name amongst these actors which truly stands out as a superstar.

That's right, Roland Rat even tried his hand at the role in Tales of the Rodent Sherlock Holmes.

Dr Watson (Kevin the Gerbil) keeps a nice diary of all his cases with Sherlock Holmes (Roland Rat), but it's not just packed with stories about hounds and studies in pink.

In fact, there's a whole range of cases which only get the briefest of mentions.

However, these adventures see our favourite Baker Street duo taking on such startling cases as chasing a dastardly canary trainers, investigating a mysterious, empty box and even trailing the fiendish Blue Carbuncle! 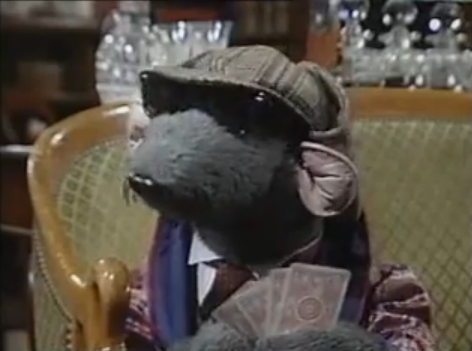 Popping up along the way to thwart Holmes and Watson are a selection of British TV treasures including Mollie Sugden, Barbara Windsor, Rodney Bewes and Christopher Ryan.

On the Trail of the Super Sleuth

Tales of the Rodent Sherlock Holmes was a seven episode BBC1 production which first aired as part of the Saturday Starts Here! early morning schedule in March 1990.

The series was written by long term Roland Rat collaborators Dominic MacDonald and Colin Bostock-Smith who had previously written for Roland and the Rat Race and Roland Rat: The Series. 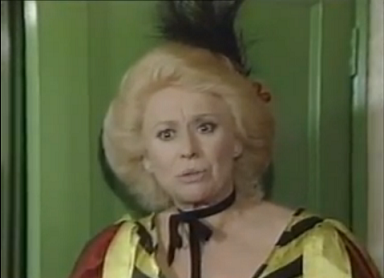 Steve Haggard was the producer and said, at the time, that "Roland Rat is the latest in a long line of distinguished actors to pull on the cloak and deerstalker of the master detective, but he's probably the first to wear sunglasses".

The series was repeated once, later on in 1990, as part of the CBBC schedule, but has not been seen since. A brief clip of the series was shown in an episode of The Pig Attraction in 1993 as Roland's life story was laid bare.

We could always remember Roland Rat playing a Sherlock Holmes role, but we were convinced it was just a sketch from one of his shows.

However, evidence began to point towards it being a fully fledged show of it's own, so we had to don our deerstalker and a do a little investigating. 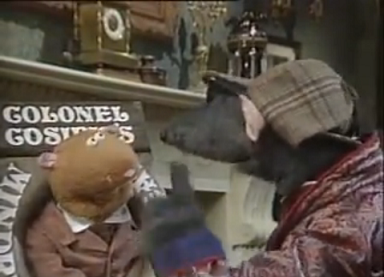 Holding our magnifying glass terrifying close to our eye we soon discovered that, yes, it was a series in its own right. In fact, it was the second spoof series that Roland had embarked on after 1987s Ratman take on Batman.

It didn't take long to track down an episode on YouTube, so we got comfy and hit the play button.

First off, dear God, what an amazing set for Sherlock's Baker Street pad. It looks like a classic BBC costume drama set where plenty of effort and money has been involved.

Errol the Hamster's theatre office is also full of shabby character, but the rest of the sets are mostly made up of backstage areas, so it's difficult to give them any real identity.

The costumes, too, are rich affairs which give the show a really strong Victorian vibe and add to the authenticity. 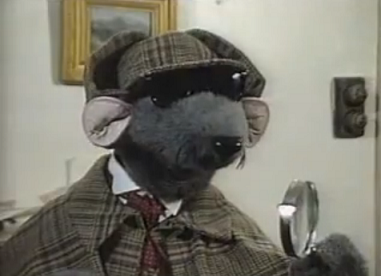 All the usual gang feature in various roles e.g Errol the Hamster and Little Reggie, but it's a shame we didn't see any mention of D'Arcy De Farcey as we always liked his spangly suits.

We've only seen the one episode and Roland appears to be in good form with his usual barbs - our favourite in this is where he claims Keith Harris died years ago. Barbara Windsor turns up and does her Barbara Windsor thing amazingly well and you can't help but smile at her.

However, the actual story, about a canary trainer causing havoc at the local theatre just didn't engage us. It's got a nice Scooby Doo-esque twist, but there were no strong laughs or exciting action. 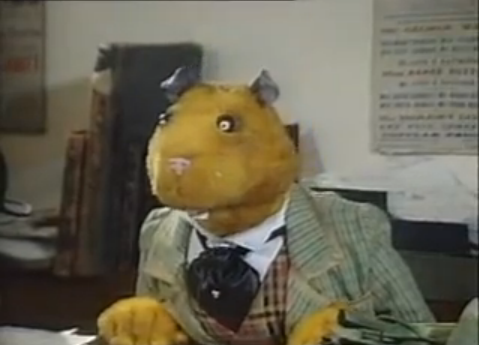 Perhaps a better idea would have been to spoof existing Sherlock Holmes adventures more closely. Working with such great source material means you've already got a gripping yarn on your hands. The humour can then come from mocking asides and sharp gags as the action moves the story on.

As it is, though, there's a horrible one-pace feel to proceedings and we were left waiting for it to end.

It turns out that Tales of the Rodent Sherlock Holmes was the final series of Roland's mainstream existance. The BBC had been trying to find him further vehicles since Roland Rat: The Series, but nothing had really landed in the public's consciousness. 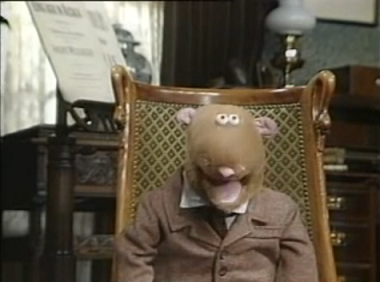 He would later pop up on Channel 5 in 1997 in LA Rat, but since then it's been nothing but guest appearances.

Still, he had a great run at the top and he's still capable of spellbinding TV as he showed when he destroyed Adrian Chiles in 2010.

We'd watch more to see if this episode was just a bum note, but we have the feeling that perhaps it was the right time to close the book on Roland's glittering career.
Posted by Telly Viewer at 2/21/2015
Email ThisBlogThis!Share to TwitterShare to FacebookShare to Pinterest