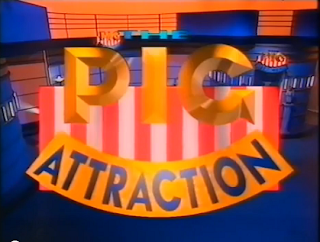 The theme tune comes to an end, a star covered door slides open and out bounds a talking pig dressed in a jacket so garish that even Jonathan Ross would think twice before donning it. The pig then proceeds to take to the pretty well designed chat show set where he begins to interview a giant bird wearing some natty 90s threads. No, this blogger hasn't been snorting mescaline through old issues of the TV Times, this was The Pig Attraction! 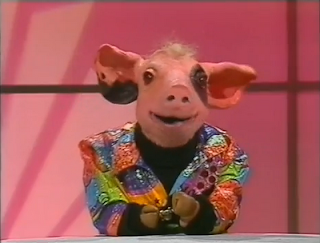 The Pig Attraction aired in 1993 on ITV during the CITV slot and is a difficult beast to define. Its main subject matter wasn't the lesser explored world of romance between man and pig, but, thankfully, puppets. The show centered upon the art of puppetry through a number of different sections. Billie the Pig fronted the show where he mostly interviewed TV puppets from the past. Billie was also involved in the backstage sections which recalled the chaotic nature of The Muppet Show. Billie was backed up by the puppeteer Simon Buckley - with a ridiculously long list of puppet credits - who would take to the road to visit puppet theaters and discuss their craft.

Featured puppets included: Nobby the Sheep, Earl E Bird, Nobby the Sheep, Roland Rat, the Pipkins gang (Hartley Hare eventually joined the show causing various trouble backstage). Peter Baldwin aka Derek Wilton from Coronation Street was one puppeteer featured talking about his love of Victorian puppet shows. Yes, this really did happen. Pinky and Perky also made their first regular appearance on television in decades by appearing each week where they would belt out a pop song with their helium vocals. A CD, vinyl, cassette tape and VHS of their performances wa released. For one reason or another... I didn't purchase these... 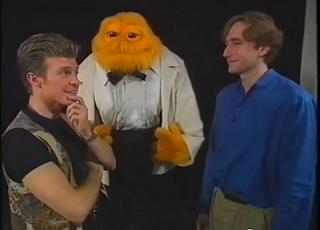 There was only one series produced by HTV consisting of ten episodes and no repeats ever aired. It was the epitome of a curious show and a brave move by ITV to aim something so niche at children. Another series would have been welcomed by myself, but I can't recall a huge buzz in the playground about the show. Other contemporary documentary programmes such as How 2 and It'll Never Work seemed to capture the interest of my sugar addled peers more.

An interesting note is that, perhaps more than anything, this show ignited my interest in TVs murky and alluring past. For the first time in my short life, I began to think back to TV shows that I could only remember fleeting fragments of. The Internet was still several years away from becoming a mainstream utility, so The Pig Attraction was a rare resource on the history of Children's TV.

Until a few years ago, there was no footage of the show online. Luckily, I had recorded an episode back in the day and uploaded it to YouTube in 2009. This allows you to relive the show in it's whole glory and see that the show is actually very well put together. A show featuring 'arranged' chaos suffers the potential to fall on it's face, but the more sober documentary sections manage to balance this. The episode can be found here - http://www.youtube.com/watch?v=NJTQRY_t42E

I recently contacted Simon Buckley to see if he would be willing to answer a few questions about the show and he kindly accepted - Curious British Telly's first interview!