The Flipside of Dominick Hide 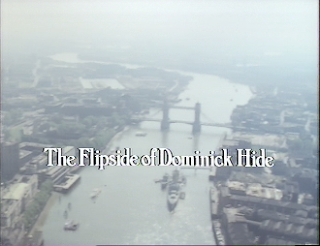 An oft bandied around paradox about time travel is the 'Grandfather paradox'. This questions the effects of a time traveller going back in time and killing their Grandfather. Headaches then begin to form whilst trying to figure out how this could happen if the protagonist was, in theory, never born due to their Grandfather's untimely demise. 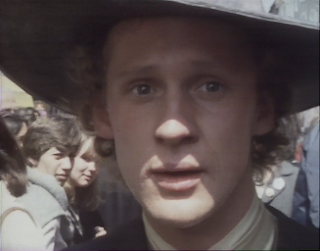 The Flipside of Dominik Hide was a 90 minute sci fi drama broadcast on BBC1 on 9th December 1980 at 9.35pm. Part of the Play For Today series, the show was cooked up by Alan Gibson and Jeremy Paul - the blueprints of the show being inspired by the Alan Gibson's fascination with flying saucers in the 1950s.

A fresh faced Peter Firth took on the mantle of Dominick with the delectably beautiful Caroline Langrishe playing Jane. The great Patrick Magee featured in a supporting role as Caleb. Filming for the play started on 10th May 1980 and wrapped on 4th June 1980.

In 2130, time travel is possible and any period before the Time Barrier was broken is known as the 'flipside'. This has led to the employment of time travellers whose mission is to travel back to the flipside and observe the mechanics of past societies.

Dominick Hide has been tasked with observing transport systems in London, 1980. Tracing his family history has led to Dominick discovering that he has a distant ancestor, also called Dominick, living in this same era and location.

Against strict instructions, Dominick begins to land and search for his great-great-grandfather in London, 1980. Any slight change Dominick makes to the past could buckle the future, but his yearning compels him to continue.

Compared to the ordered and steady society of 2130, the London of 1980 is noisy and chaotic. Finding himself in Portobello Market on a particularly busy day, Dominick befriends a small group of pals who vow to help find his distant relative 'Dominick' whilst he takes on the name 'Gilbey' - influenced by a quick glance at a bottle of gin. 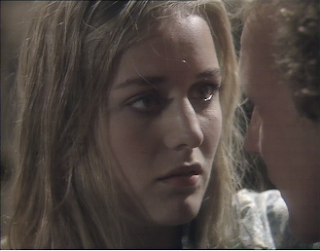 Whilst the search for 'Dominick' continues, Jane and Dominick become increasingly attracted to each other. A romance fuelled by the difference between their backgrounds and outlooks. Jane eventually falls pregnant with Dominick's child and at this time, Dominick's superior - Caleb Line - reveals that this is the ancestor Dominick has been searching for.

Due to a one in a million genetic time mutation, Dominick is his own great-great-great Grandfather - a fact that Caleb has long known and why he has allowed Dominick to land on the flipside.

Dominick returns to London, 1980 one more time to set Jane and his son up for life with details on how to win the next week's football pools. Returning to the future, Dominick proceeds to have a child with his 2130 'wife', Ava. 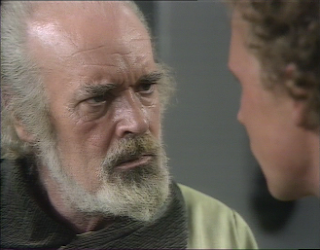 The Flipside of Dominick Hide attained viewing figures of 5.3 million and a respectable reaction index of 75 - compared to an average Play For Today score of 59. The Radio Times letter editor claimed that "No other single new BBC tv play in 1980 attracted so much correspondence " - highlighting the public's affection for the show.

The success of the show led to a sequel in 1982 entitled Another Flip for Dominick. A DVD containing both plays was released in 2005 accompanied by a very detailed viewing notes booklet. 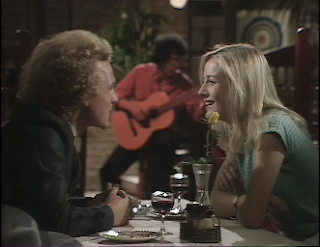 Curious British Telly first discovered Dominick a few months back and was thoroughly charmed by the production. The originality of the core concept is clever and well written - the divides between the two time periods are highlighted subtly, but leave a powerful question about the values of freedom over security.

Peter Firth, Caroline Langrishe, Sylvia Coleridge and Patrick Magee all put in terrific performances and capture the essence of their characters perfectly. Some of the acting does fall below par - Pippa Guard came across a little wooden and Timothy Davies was a bit too hammy, but this could also be down to poor characterisation on the writers' part. On the whole, though, there are more hits than misses which is impressive for the era.

One other area of the play which impressed was the music. The theme tune being a soulful number entitled You'd Better Believe It Babe by the band Meal Ticket which is echoed throughout. Also present, in the 2130 scenes, are wonderful medieval muzak takes on the Beatles songs: Yesterday and Lucy in the Sky with Diamonds.

All in all, this is a fantastic play which comes across with charm and innocence whilst balancing the genres of comedy, sci fi and drama. We thoroughly advise picking up the DVD.