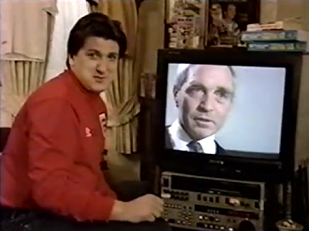 You may have noticed that there's a World Cup on. England, after all, haven't delivered their customary turgid showing and the nation is going as mad for football as Gareth Southgate does for waistcoats. Live sport, however, doesn't really fall under the Curious British Telly banner, but thankfully that doesn't mean we can't enter into the spirit of the event. And that's why we're going to highlight the hilarity of World Cup Heroes and Villains from 1994.

Now, if there's one thing I'm sick of, it's clip shows fronted by a load of comedians being paid to talk about subjects they have absolutely no interest in. Bob Mills, however, is different. Take, for example, In Bed With Me Dinner. Mills isn't just chasing the dollar here, you can tell by the look in his eyes that something else is going on. He's absolutely fascinated by the bizarre clips dug out of the archives. And you just know that, decades on, they still haunt and delight him. 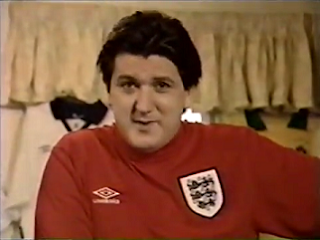 Therefore, he's the perfect host for World Cup Heroes and Villains, a one-off clip show looking at the, you guessed it, myriad heroes and villains from World Cup history. That's not, of course, the only attribute that qualifies Mills to be presenting the programme. He's also a huge football fan and, when he's not on the terraces at Brisbane Road supporting Leyton Orient, he can be found setting fiendishly complex football quizzes on TalkSport.

The setup for World Cup Heroes and Villains is as simple as the set it's presented from. In what appears to be a mockp of his living room, Mills passes judgement on the morality and integrity of all those involved with the grand history of the World Cup. It's not quite the complete history though. No doubt caused by the need for a one hour running time, Mills doesn't start with the first World Cup in 1930. Instead he decides to start with the first World Cup that counts, which is obviously 1966.

Picking his way through the endless footage with his trademark brand of everyman cynicism, Mills is eager to highlight not just the obvious heroes and villains, but also the more intriguing candidates. And that's why, nestling amongst heroic footage of Gary Lineker scoring a hat trick against Poland, we also see England winger John Connelly being feted for being dropped from the team which led to the formation of Alf Ramsey's "wingless wonders" who went on to claim the trophy.

There are also the villains such as the Dutch businessman that can clearly be seen leaping for joy behind the England goal in a 1993 qualifying game against Holland. Ronald Koeman, who should have been sent off earlier, has just scored and Mills' fury at this businessman leaping "like Tommy Steele in Half a Sixpence" may be one of the funniest moments in the show. Other villains include Jeff Astle for missing an absolute sitter against Brazil in 1970 and a whole bevy of players from the 1986 World Cup for feigning injury by performing acrobatic rolls on the floor.

However, it's not just archive footage on offer. A number of the heroes and villains on offer appear in short interview segments where they either defend or celebrate their infamy. John Connelly lovingly strokes his 1966 England tracksuit, Harald Schumacher defends his horrific 'assault' on France's Patrick Battison and Terry Fenwick fails to explain why he didn't just give Maradona a punch up the bracket in 1986. As a result, Mills labels him a nancy.

The whole thing is held together by Mills' irreverent and mocking jibes which often stray into highly surreal avenues such as suggesting the Russian linesman in the 1966 World Cup final was replaced, at the last minute, with fictional 1930s music hall star Benny Bennett. Mills, once described by Mark Lewisohn as "the engagingly friendly comedian", ensures that the pace never drops and its a testament to his delivery that, 24 years on from when I first saw it, I can still remember some of the gags.

Much like the majority of England's World Cup endeavours and adventures, World Cup Heroes and Villains is gone before you know it and sadly it remained a one off. Nonetheless, there are plenty of gags throughout and, luckily, the whole thing is on YouTube to help you get in the mood for the latter stages of the 2018 World Cup. And, who knows, maybe we'll have a few more heroes and villains by the end of it.
Posted by Telly Viewer at 7/07/2018
Email ThisBlogThis!Share to TwitterShare to FacebookShare to Pinterest