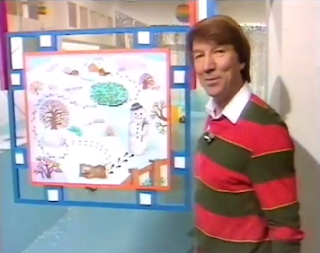 Welcome to what I hope will be a regular Friday feature and, as the title suggests, it will feature five archive TV clips that I've found online and think will be of interest to Curious British Telly readers. So, every Friday, at the end of what will almost certainly be a tough week, there will be a little dose of nostalgic escapism to remedy the horrors of the modern world.

Anyway, this week finds forgotten British children's TV shows coming to the fore, one of Michael Grade's least favourite sci-fi shows (not including Doctor Who) being reviewed and even some good old pre-Premier League football.

Although forgotten by most people who grew up in the 1980s, I most certainly remember Hokey Cokey. I guess, in a way, it's not that dissimilar to Play School and, in fact, Don Spencer and Chloe Ashcroft both starred in Play School. Accordingly, you should be able to figure out what you're going to get: songs, stories and looking at how things work. This particular episode, first aired in 1984, takes snow as its theme and, God knows, we could all do with some of that right now.

One of the greatest 'what if?' questions will forever be: what if the BBC had gone through with the third series of The Tripods rather than cancelling it after the second series? To be fair, it was lucky to get a second series given the plodding pace of the first series which even its most die-hard fans - including myself - admit is a major stumbling block. This 1984 clip from TV review show Did You See...? finds Angela Huth, Brian Aldiss and Andrew Knight all putting the boot in.

The 1990/91 season saw English football teams being accepted back into Europe after five years in the wilderness following the Heysel tragedy. And, to celebrate this re-entry, Manchester United only went and won the Cup Winner's Cup against a rather tasty Barcelona team. Although the Premier League was fast approaching, it was still a different era of football with ITV's presentation of the match featuring Elton Welsby, Denis Law and Jimmy Greaves.

With Philip Schofield and the Broom Cupboard still a year away, there wasn't much continuity to hold the afternoon's children's schedule together on the BBC. Thankfully, though, they did have some rather wonderful 8-bit animations complete with plinky plonk sound effects such as this one featuring a 'naughty cat' from the end of the children's strand.

As an added bonus, this clips also features a sparse presentation on the next day's programming for children. But that's not all! There's also a quick look at the regional news, a slide for The Man from Uncle, an amazing BBC clock AND some fantastic BBC News graphics.

What's that in the corner of your eye? That's right, it's a nostalgic tear.

In the early days of Channel 4, the closedown for each evening featured in-vision presenters saying goodnight to viewers from a rather destitute, grey set complete with, for a dash of glamour, a palm plant. This particular clip not only harks back to a simpler age of TV presentation, but also comes complete with a curious continuity cock-up, just keep watching to the end.

Posted by Telly Viewer at 7/27/2018
Email ThisBlogThis!Share to TwitterShare to FacebookShare to Pinterest