Aliens in the Family

Humans are born a right immature bunch. Not only are we incontinent, but we cry almost non-stop and we can't do much more apart from lie on our back. Take a look across the animal kingdom at, for example, horses and you'll find that their darling little foals are on their hooves and walking within a few hours. However, who ends up riding and whipping who at the Grand National?

It's us, of course, and this is partly because we're able to grow into such intelligent (and gambling mad) beings due to the family support network surrounding us. And the buck doesn't stop at abandoning us when we can walk and fend for ourselves. Families are a lifelong bond and this gives them an exclusive, almost sacred feel, but they can easily be fractured by a breakdown in parental relations.

The pursuit of familial life, though, means that different sets of divorced families often combine into new hybrid families. This disrupts the status quo of these individuals' concept of family and can take a lot of readjustment. And things are made even harder when they also take in an alien on the run from a rival bunch of aliens who list genocide as their number one hobby. This is Aliens in the Family and we're your looking glass into this crazy mixed up scenario!

Down on that curiously green and blue planet known as Earth, a couple of families have come together following the jagged effects of divorce. David (Rob Edwards) has managed to find new love in the form of Phillipa (Clare Clifford), but they both come with, uh, baggage (is that too cruel?) in the form of their seperate sets of kiddywinks. 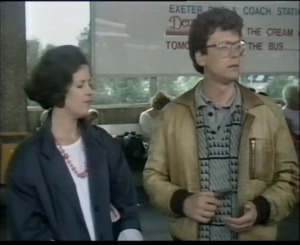 David is bringing Jacqueline aka Jake (Sophie Bold) to the table whilst Phillipa has managed to squeeze Dora (Claire Wilkie) and Lewis (Sebastian Knapp) out of her womb in the preceding years. Jake, as the name suggests, is very tomboy like in nature and rather androgynous in looks (we suspected it was a young John Squire at first) and is the polar opposite of Dora who's all hairspray and bust enhancing cream. Naturally, tensions flare between Jake and Dora, but Lewis is a little more amenable as he's a young 'un with less prejudice. 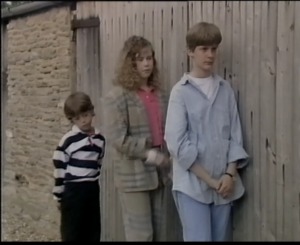 Meanwhile, up in that there galactic galaxy, is a Galgonquan spaceship where - another set of siblings - Bond (Grant Thatcher) and Solita (Elizabeth Watkins) are getting all anxious about Bond's upcoming assessment - they're just like us panicking humans really. Solita needs to disguise herself on Earth as an everyday object and Bond is tasked with locating and retrieving this (all after disguising himself as a human being man). Doesn't sound too testing, but there's also the threat of the sinister Wirdegen to content with who want to turn Galgonquans inside out to make a nice rug in front of their alien fires. 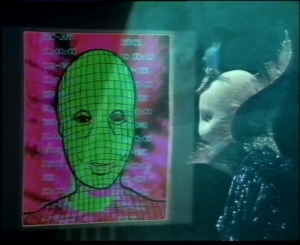 As with all narrative dramas, things go tits up pretty quickly for all involved from the very start. Jake can't stand life at David and Phillipa's house and Bond finds himself fleeing from the Wirdegen almost as soon as he's set foot on Earth. Bond ends up with the Earth kids on a desperate quest to find Solita and get home asap.

Aliens in the Family started off life as a series of words formed into sentences and various narrative devices in what we all know as a novel by the late Margaret Mahy. The BBC decided to dramatise it in 1987, so Allan Baker broke out his typewriter and Christine Secombe brought her children's tv experience to the fore as director.

Episodes first aired on Wednesdays at 5.10pm on BBC1 under the CBBC umbrella in late 1987. Episodes were around 25 minutes long and were repeated on the following Sunday. The series was repeated on BBC1 in 1989, but that was the last time Aliens in the Family had its tellywaves transmitted into our retinas.

Luckily, the whole series is preserved on YouTube, so you ain't got no excuse for taking even the tiniest of peeks at it.

Families! What a Nightmare!

We were sent a bundle of DVDs several months ago and in amongst them was a curious show entitled Aliens in the Family. We can't half get a bit of 80s sci-fi, so watching it was pretty much a given. Sure, it was a sunny day outside, but what sort of TV anorak actually likes the warm sun beating down on their pasty skin? In reality, we're far from pasty, but it's a nice stereotype to beam out and maintain.

Oh and Margaret Mahy wrote the original novel and she also wrote Nonstop Nonsense which is probably one of our most favourite books ever, so resisting the temptation of this show was getting harder and harder. We had absolutely no choice but to stick it on and get stuck in. 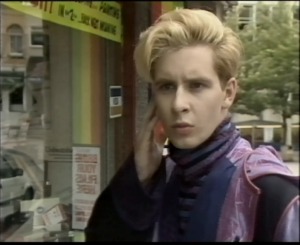 JESUS H. CHRIST! This show looks and sounds so 80s it's unbelievable. From the warbling sounds of U2 and Kim Wilde dominating the radio waves to the plethora of beige and insipid looking electronics in a branch of Currys we were in mediocre taste heaven! And there was even a quick glimpse of a PoundStretchers complete with stretched logo to show how far your money can go (those bloody marketing scamps!). 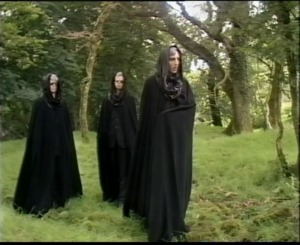 Talking of the show's looks, we really liked the design of the Galgonquans. We appreciate that they could easily have walked out of a Jon Pertwee era Doctor Who story - and this is indicative of the lack of progress made in terms of prosthetics and effects by British TV - 15 years earlier, but they weren't too embarrassing. There was a hint of humanity to them, but different enough to mark them out as otherworldly beings. And their spaceship wasn't too bad either, thankfully it was kept fairly minimalist and the special effects didn't stink either.

The Earth children's acting was a bit of a sore point for us. It was that terrible, wooden delivery and lack of emotional breadth which can ruin a show, so things were not getting off to a good start. Note, however, that Sebastian Knapp and Claire Wilkie have gone on to have long acting careers, so it's proof that British child actors are capable of improving tenfold when they stick at it. 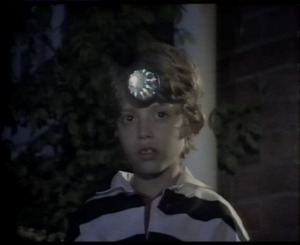 Storywise, it weren't too bad. It tackled some important family themes that huge numbers of the audience would have been able to identify with and there was a good old fashioned dash to safety to keep them entertained. The Wirdegen were a great addition and the menace portrayed by the Wirdegen leader ws simultaneously fantastic and nightmare inducing. In fact, there were a few dark, disturbing moments such as the Wirdegen takeover of little Lewis, so it gets extra kudos from us for that. 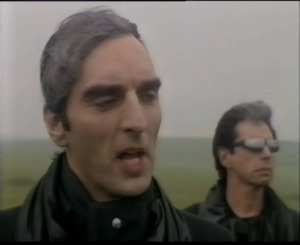 Aliens in the Family, however, did fall into that classic trap of overstretching the story. The dash towards the stone circle (yes, there's a mystical stone circle, who doesn't love them?) seemed to take forever and they probably could have shaved an episode off the serial to keep things tighter and more on track. And do the parents really add much here apart from bewilderment? The final revelation to Bond from his superiors also meant that the serial ended with somewhat of a whimper and the feeling of being cheated out of the emotional investment we'd made.

Aliens in the Family is a decent, but flawed bit of children's TV. It's glorious representation of 80s culture got us really excited, but sadly the story and the main leads didn't nail it. Too often we found boredom nibbling at the edges of our concentration. It's not a terrible piece of children's telefantasy, but it certainly doesn't hold a candle to other shows from that era. However, it's definitely worth a watch as there are a few creepy moments sprinkled throughout and a couple of decent performances from the adults.
Posted by Telly Viewer at 1/30/2016
Email ThisBlogThis!Share to TwitterShare to FacebookShare to Pinterest