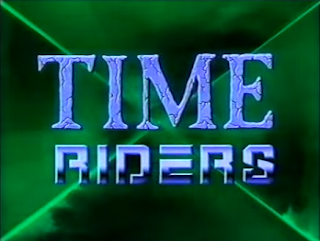 Do we love the idea of time travel? Of course we bleeding well do! In fact, since 1986 - when we first encountered Doctor Who - we've constantly fantasised about travelling through time. And, curiously enough, we're rather obsessed with going back to 1986.

Just imagine how amazing it would be! We could go and check out some retro trainers, revisit shops that we had only fleeting memories of and digest an absolute gutload of retro TV - absolutely everything on the box would be retro, sounds like heaven!

However, once we discovered that it was nigh on impossible to get hold of any absinthe in the UK we'd more than likely suffer a prolapse. So, yeah, time travel it's a dangerous old game and one that should be approached with due care and attention. Because not only can you be deprived of anise-flavoured spirits, you can get yourself into a right lot of bother just like in that Time Riders.

Dr B.B Miller (Haydn Gwynne) is a motorbike riding scientist (yep, she's pretty cool and radical) who is busy working on a time machine project in the depths of Professor Crow's (Clive Merrison) scientific facility. He isn't keen on B.B's work as he sees it as a useless waste of grant money, but he's got enough on his plate dealing with animal experimentation to truly do something about it. 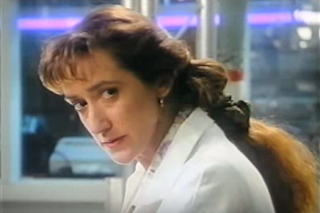 B.B takes Crow with a pinch of salt and continues working on her time machine. And, bloody hell, she only goes and manages to bring back a Victorian urchin, Ben (Kenneth Hall), to the present day. What an amazing and marvellous achievement, hey? Pat on the back for old B.B! 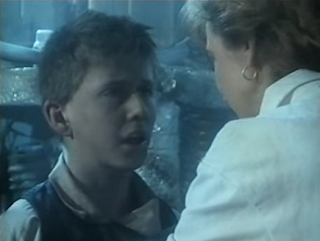 Crow - despite rolling his eyes in an incredulous manner at first - soon realises that old B.B has stumbled on something pretty special. He's probably got his eyes on a Nobel Prize and, seeing as it's his facility, he decides that he's going to take all the credit for it. First, though, he and his sickly insane sidekick Hepworth (Kerry Shale) need to perform a few experiments to carbon date young Ben e.g. removing his spinal column 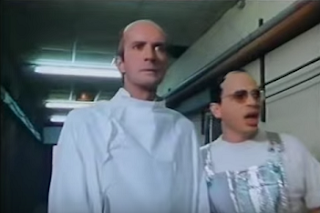 B.B, and Ben, aren't keen on this malarkey, so B.B modifies her motorbike into a time machine and they zoom off into the past. They arrive in 1645 during the middle of the English Civil War and find themselves having to fend of accusations of witchcraft, getting pulled up in front of a firing squad and trying to explain the concept of a motorbike to 17th century disbelievers.

Time Riders aired on ITV in Autumn 1991 and episodes - produced by Thames Television - were roughly 25 minutes each. Kenneth Hall helped introduce the first episode with Tommy Boyd from the CITV studio.

Michael Winterbottom - famous for The Trip, 24 Hour Party People, A Mighty Heart - directed the script which was the result of Jim Eldridge's busy fingers.

Filming took place at Polytechnic of Wales and Caerphilly (notably at the castle).

Travelling Through the Time Space Continuum

We were sent a DVD of Time Riders a while back and for a myriad of reasons hadn't got round to sticking it on our old tellybox, but, suddenly, the time felt right, so we seized the day with eager hands and immersed ourself in some early 90s kids TV.

The opening credits feature a predictable time tunnel and we found ourselves thinking "Oh, Christ! Whatever cliche are they going to dream up next? A robot dog?!", but thankfully things turned out to be not so bad. And this is mostly down to the incredible efforts of Michael Winterbottom to give a shot in the arm of the rather moribund entity known as children's TV direction. 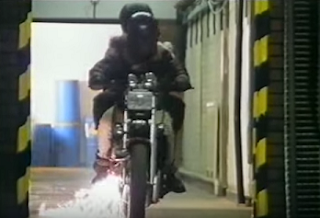 You see, what he don't seem to like is a load of boring old static angles. He wants movement, he wants texture and he bloody well goes out and gets it. The whole serial feels big and Winterbottom cleverly uses quick cuts in and out of the action to remind us how large the world we're visiting is and that there's more to it than just the main protagonists.

But it's the layers of emotion and action that Winterbottom manages to wring out of the camera which really impressed us. Mounted cameras are fixed to motorbikes to create a sense of urgency, we're treated to POV perspectives to immerse us in terrifying medical procedures whilst the use of dollys helps conjure up an all enveloping sense of movement. 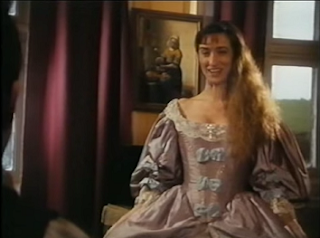 The direction is miles ahead of anything else on children's TV at the time - although Dark Season comes close - and series' such as Grange Hill and Byker Grove look very sedentary next to Time Riders. Winterbottom's ambition gives Time Riders a filmic edge and, given the considerably large cast, we would be intrigued to find out what the budget was.

Anyway, we've waxed lyrical about Winterbottom's undeniable genius, so let's take a look at the acting.

Time Riders is packed full of great acting and a wonderful list of cast members. Haydn Gwynne brings glamour and strength to her leading role with a healthy dose of determination, Kerry Shale is disturbingly terrifying as Hepworth with his sinister and sadistic glee spilling out of his every pore and Clive Merrison aka Mark's Dad from Peep Show exudes a ruthless egomania with aplomb. And that's just the present day folk! 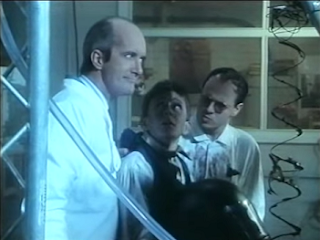 Ian McNeice, James Saxon (D'Arcy De Farcy!!!) and Julie T. Wallace have all had long and successful careers (RIP James Saxon), so it's not simply a case of them playing the old "we're from the past and are bemused and confounded by your futuristic ways". No, in fact, they mirror Professor Crow's megalomania and they capture this perfectly. They perhaps trail slightly behind the madness of Irongron in the Doctor Who serial, The Time Warrior, but who doesn't? 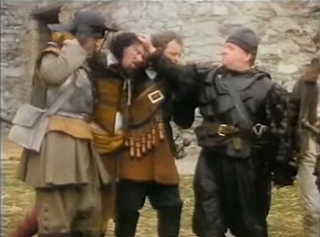 What's that you say? Where's our comments on young Kenneth Hall's performance? Well, uh, it's not great. It's not the most wooden performance we've ever seen, but it's far from sterling silver either. His lack of roles - at least according to IMDB - is perhaps testament to the realisation that acting isn't his forte. It leads to a lack of spark between him and Haydn Gwynne, but, in his defence, he isn't handed many killer lines in the script. Oh, the script! Let's take a look at that!

Weaved into the Time Riders story there are some seriously sinister themes. Hepworth and Crow's intent for human vivisection is a disturbing concept to fling in the face of youth, but, by jove, flung in their face it is. And then there's the outright bizarre actions of Lord and Lady Chalmerston who (it's subtly hinted at) have some sort of fetish for murder - A Fred and Rose West of the 17th Century if you will. 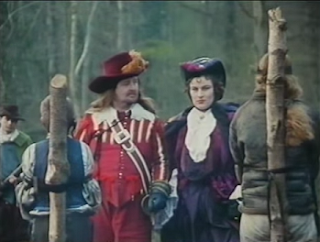 It's never overtly graphic, though, so it's not something that you can imagine Mary Whitehouse getting her bloomers in too much of a twist over. And coupled to this darkness are some genuinely funny lines - our favourite being Lady Chalmerston's reassuring quip to her husband: "You know you always feel guilty after you've killed someone".

There's plenty of action - coupled with the brilliant directing - to keep you on your toes, but it does get a little repetitive even over just 4 episodes: B.B and Ben get captured, they escape, they get captured, they escape ad nauseum. Then, of course, there's the lack of chemistry between B.B and Ben - unfortunately this is down to Ben being portrayed as a one dimensional urchin who lacks any real personality, he's certainly no Artful Dodger. 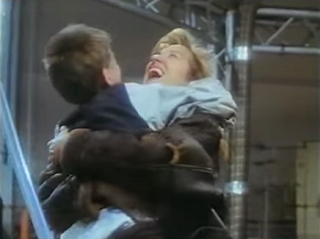 And why are Professor Crow and Hepworth suddenly abandoned? They're a good double act, but after episode 1 they all but disappear despite imparting a real sense of menace. If, somehow, they could have pursued B.B and Ben through time then this could have given the show a bit more purpose. As it is, we weren't too concerned with the 17th Century villains motives.

Oh and the ending is a little too straightforward and easy which left us thinking "Oh, so they went down that route. PREDICTABLE FIENDS!".

Michael Winterbottom delivers a phenomenal performance directing Time Riders, but Jim Eldridge's script, despite delivering some great dialogue and exploring some adult themes, just fails to fully gel for us. The lack of development in Ben's character is the real sticking point and we wanted a bit more invention and ingenuity in how the plot unfolded.

Would we would advise you to watch it? Sure, we certainly would, as there's some great camerawork to make you ponder exactly why so much of children's (and adult) TV before the late 90s was so ponderous and wooden in terms of direction. And there's a whole host of faces to spot putting in some good performances, so feel free to head over to YouTube and watch it!

And has it changed our mind on travelling back to 1986 if we got the chance? Well, young Ben seemed to survive all the terrors of the past and he was useless, so what the hell, we can't do any worse and there's the added bonus that we'd get to watch Sebastian the Incredible Drawing Dog.
Posted by Telly Viewer at 2/06/2016
Email ThisBlogThis!Share to TwitterShare to FacebookShare to Pinterest