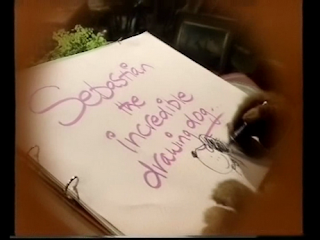 It's been proven - in double-blind placebo controlled studies - that children absolutely love cartoons; they also love drawing them. Sure, most of their efforts involve out of proportion heads balancing upon two stick legs, but the effort's there, right?

Anyway, one other thing that kids love are furry little critters such as dogs, cats and rabbits. Back in 1986 the BBC decided that the perfect kids tv show would marry cartoons, art and a dog. To give the show an extra dimension of engaging magic they added Michael Barrymore into the mix to create Sebastian the Incredible Drawing Dog. 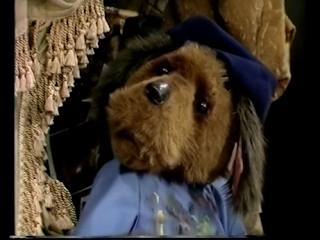 Surrounded by archaic clutter in a dimly lit flat, Sebastian (breed unknown) paints the days away to his heart's content. To ensure that the fine relationship between man and dog is maintained, Michael (Michael Barrymore) also lives there, presumably to take him to the vet and remove ticks from the most unreachable parts of Sebastian’s shaggy anatomy. 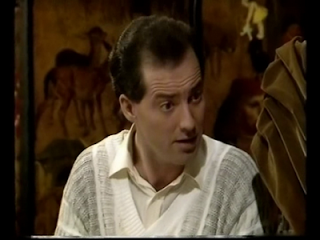 Michael, not being blessed with an artistic outlook, finds himself titting about in the flat to kick-start minor plots such as dressing up as Lord Nelson or even the incredibly dramatic ‘searching for a pair of socks’ episode. A chance comment on these heart stopping and tension fuelled plots will usually lead to Michael dusting down the ‘large and unusual storybook’ to regale viewers with a quirky tale as Sebastian backs it up with illustrations.

Sebastian first bounded onto our screens in 1986 and wagged its tale for a total of 13 episodes aired on BBC1 in the CBBC afternoon slot. The concept of the show was devised by the cartoonist David Myers who had previously written for Dave Allen, Leslie Crowther and Tommy Cooper.

The illustrations shown in the show were all drawn by David's fair hand. Sebastian was operated by Richard Robinson, a puppeteer with a varied career which took in Spitting Image, The Riddlers and Bungle in the 90s revival of Rainbow. Incomplete repeats of the series followed in 1987 and 1988.

A rather interesting demo - minus the child vocals - of the show's theme tune has recently surfaced online. The track was put up by its composer - Mike McNaught - and can be listened to at http://tinyurl.com/d9thqtz

There were a range of books produced in 1987 by Andre Deutsch Ltd which were written and illustrated by David Myers. The books are all based upon episodes of the TV series. They are long out of print, but fairly easy to pick up on Ebay/Amazon and aren't ridiculously expensive. 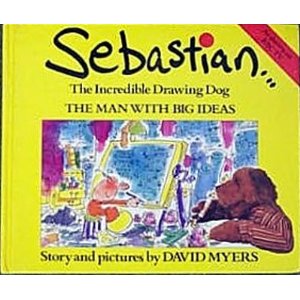 On The Quest for Sebastian

For about two and a half decades we racked our brains to the point of madness trying to remember what that show about “that dog who draws them cartoons and wears a smoking jacket like a toff” was, but we just couldn’t dredge up anything up from the depths of our memory banks. And, worse yet, no one else could remember it.

However, a quick search on Google in the early 2010s finally yielded the name – Sebastian the Incredible Drawing Dog! And it featured Michael Barrymore! Yes, that’s right, Michael “TOP, MIDDLE OR BOTTOM” Barrymore from off the telly! We’ve always been a fan of the Bermondsey legend, so the fact he was involved in the show imbued it with extra kudos. 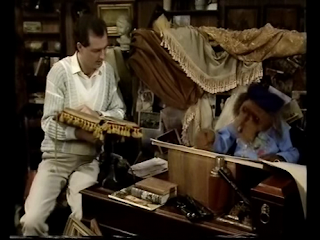 Unfortunately, there wasn’t much information about the show online. Pic Productions – who produced the original pilot with David Myers in the lead role – had a few photos of the show on their website, but it just wasn’t enough for us. We wanted something we could really get our teeth into and get the old nostalgia juices flowing.

And that’s when we headed to the BFI Archive.

The BFI Archive is to TV history enthusiasts as the Black Stone of Mecca is to Muslims. Visiting this underground viewing archive is something that every TV nerd needs to make at least once in their life to achieve a greater spiritual enlightenment and, more importantly, watch some really rare tellywaves.

Anyway, we booked in at the BFI Archive and eagerly travelled down there one lazy spring afternoon with a nervous energy pulsating through our veins and a fiendishly delicious sandwich neatly packed in our manbag. And that ain’t a euphemism, it was an amazing concoction of chicken, chorizo AND coleslaw.

We had arranged to watch two episodes – The Barking Cat and The Toastmaster – to help unlock memories which had been disabled by synapses which had stopped firing a long, long time ago. We were finally on the trail of a forgotten chunk of our childhood and, by jove, we were going to jump in headfirst and enjoy this, but what the hell would be waiting for us? 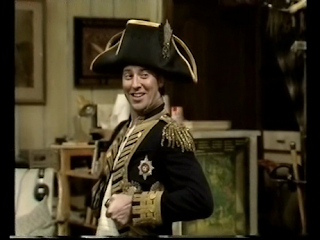 Sebastian is a particularly cultured dog; instead of sniffing other dog's rectums inquisitively, he is much more at home playing the violin or piano and, of course, he’s a dab hand with the old paintbrush bristles. Upon a hat stand hangs a pith helmet and it wouldn't surprise us if the well-spoken Sebastian had spent time hunting in Africa.

Michael Barrymore is, surprisingly, quite well spoken, but does let slip several of his trademark "Alwight!"s throughout the episodes. Barrymore's clowning persona is fully formed here and he would engage audiences with it for a further 15 years. His attire – in the episodes we viewed at least – are a testament to the hideous sense of fashion that was deemed acceptable in the 1980s, all beiges and whites.

The main strength of the show is the relationship between Michael and Sebastian. They bicker, squabble and banter with each other like any classic double act worth their salt. Sebastian’s the straight man and Michael, well, he’s simply Barrymore. We're pretty sure that Barrymore is ad-libbing some sections and this is a skill that he would go on to refine to marvellous heights as his ITV career took off.

The illustrations and the stories are less amazing, but we doubt even Tex Avery could have competed with the fizzing, visceral prowess of prime-era Barrymore. Besides, Sebastian is aimed at the younger end of the kid’s spectrum, so we’re probably just being a bit snooty that the stories don’t have the narrative punch and structure of Charles Dickens. 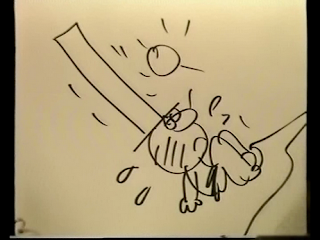 Following our visit to the BFI, we were contacted by a collector of vintage television who goes by the name of James. Whilst sorting through some Betamax tapes from 1987, he had come across an episode of Sebastian which was entitled Tall Hat Joe. James was kind enough to send us a DVD of the episode, so we could finally put some screenshots of the show online. Hopefully it will unlock some repressed memories out there and the word of Sebastian will begin to spread.

As packed full of charm as their flat is stuffed with curios, it's very strange that only 13 episodes were produced. Sebastian and Michael make for a good double act and surely the unusual story book had more quirky tales bursting to escape.

The BBC were obviously keen to involve Barrymore with children's TV as he resurfaced in another arts based show, Mick and Mac, in 1990. Sebastian remains our favourite 'forgotten' show from our childhood and we can only pray that we get to see more episodes in the future.

All details as per the Radio Times listings:

1. The Tall Short Man
Thursday 11th September 1986 - 4.10pm
Today's story is about the untidy Mr Sammy Snooks and his problem with spring cleaning! Sebastian draws the characters and Michael tries to find his sock.

2. The Man with Big Ideas
Thursday 18th September 1986 - 4.10pm
Today's story is about Mr Merrybean, the inventor, without whom our seasides would not be as they are today! Sebastian draws the characters and Michael has trouble with a genie's lamp!

3. The Barking Cat
Thursday 25th September 1986 - 4.10pm
Today's story is about Blossom, the barking cat! Mrs Honey takes Blossom to an animal impersonator; the outcome of which has unfortunate consequences.

4. The Man Who Made Custard
Thursday 2nd October 1986 - 4.10pm
Today's story is about Archibald O' Flaherty and his attempts to make the perfect custard. Unfortunately he fails, but by doing so he makes his fortune. Sebastian illustrates the story and Michael makes a currant cake.

5. The Cloud Catcher
Thursday 9th October 1986 - 4.10pm
Today's story is about Mr Catchit, a man who could catch anything, a cold, the flu, a bus! Mr Catchit is given a special assignment; catch the clouds in the sky to stop it raining. Sebastian illustrates the story and Michael learns to swim.

6. Tall Hat Joe
Thursday 16th October 1986 - 4.10pm
Today's story is about civil servant Tall Hat Joe, who was asked to keep lots of secrets 'under his hat.' But when a gust of wind blows off his hat... Sebastian illustrates the story and Michael becomes Lord Nelson.

7. The Rabbit Who Ate Paper
Thursday 23rd October 1986 - 4.10pm
Fred the hungry rabbit's eternal quest for food leads him to an important job with the government. Can you guess..? Sebastian illustrates the story and Michael tries his hand as a magician.

8. The Cowboy Who Hated Guns
Thursday 30th October 1986 - 4.10pm
Today's story is about Bernard B. Kettle, a cowboy who carried two huge old-fashioned brass motor horns at his side. Sebastian illustrates the story and Michael auditions for a part in The Good, The Bad and The Ugly!

9. The Prince Who Loved To Laugh
Thursday 6th November 1986 - 4.15pm
Today's story is about a Prince whose tears of laughter turn to tiny glass beads.

10. The Shyest Man in the World
Thursday 13th November 1986 - 4.10pm
Today's story is about Benny Buckle and his attempts to hide away from the world. One day he crashes into a large mirror and is rushed into hospital.

11. The Funny Story Man
Thursday 20th November 1986 - 4.10pm
Percy Brightside thinks up the world's funniest joke. Trouble is that nobody finds it funny - nobody that is until he visits the zoo...

12. Mr Petal's Headache
Thursday 27th November 1986 - 4.10pm
Today's story is about Peter Petal who wakes up one morning with bouquet of flowers growing out from the top of his head! His new fashion catches on and even today is copied by one profession. Which one? Sebastian draws the pictures and Michael tries to keep fit.

13. The Toastmaster
Thursday 4th December 1986 - 4.05pm
The final story in this series is about Mr Nicholas Nibbs and his extraordinary Car. 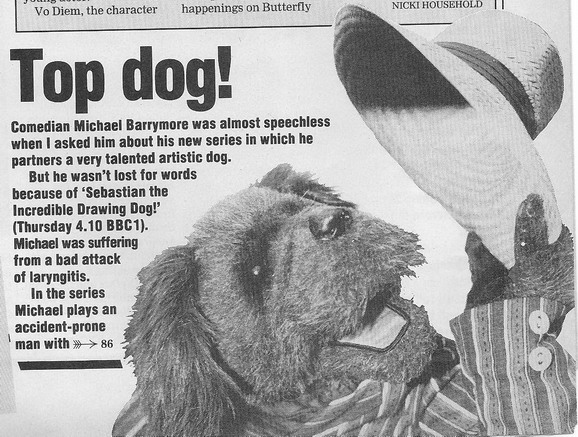 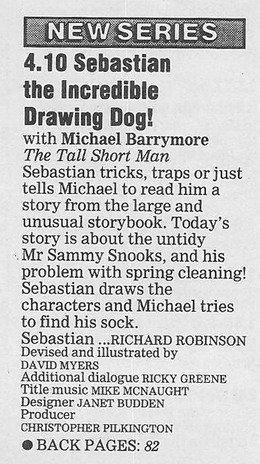 Posted by Telly Viewer at 10/23/2012
Email ThisBlogThis!Share to TwitterShare to FacebookShare to Pinterest