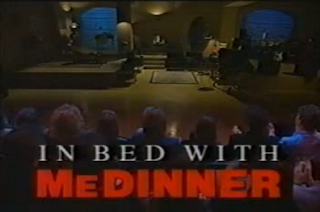 ITV hit a real winner with Harry Hill's TV Burp throughout the early part of the 21st century. Running for 11 years, it clocked up 166 episodes, numerous awards and guaranteed ratings. Cleverly, the producers also decided that it should contain a constant barrage of laughs. However, ITV had been running for 46 years when TV Burp first aired, so why did it take them so long to come up with the concept? After all, pairing a presenter with TV footage to commentate on isn't going to break the bank. What's that you cry? It actually only took them 37 years to come up with the idea? Well, lets take a look at the curious 90s beast that is In Bed with Medinner.

In Bed with Medinner stars Bob Mills as the sarcastic everyman chatting to the audience from the comfort of his flat. It's not his flat of course, it's in a studio. Furthermore, the studio set isn't even based on his flat. Initially it's a mock up of  Number 6's flat from The Prisoner and, later on, John Steed's flat from The Avengers. Nonetheless, Mills is there and the show starts with him rummaging about and finding various objects to tell a story. Series 2 also has a featured band each week such as Gary Numan or The Buzzcocks. Eventually, Mills grabs hold of a videotape featuring ITV archive footage and provides commentary to it. 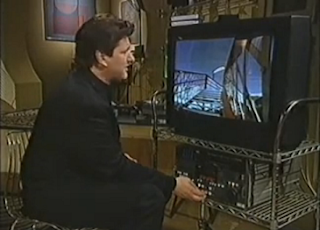 London Weekend Television produced the series which ran for four series between 1992 - 1999. The first series comprised two 30 minute episodes which aired in November 1992. The remaining three series were transmitted in 1994, 1997 and 1998/99. The final series was renamed Still in Bed with Medinner. All episodes were 30 minutes long apart from series two which featured 60 minute episodes. A VHS release entitled 'Wot a Palaver' was released in 1994 and featured excerpts from series 1 and 2. Bob Mills also hosted a vague relation to the show for Comic Relief 1995. Episodes went out very late at night, usually after midnight.

Curious British Telly, as precious youths, were always intrigued by In Bed with Medinner. The title contained the word 'bed', an allusion to Madonna and was on very late at night. Rumours soon began to circulate, in the playground, that it was a show featuring non-stop, hardcore pornography. We were all too late to stay up and watch it, so it retained an air of mystery. At some point in the late 90s, the Paramount Channel began showing repeats of the earlier series. It was still on late, but we were that bit older and could stay up now. It became clear, early on, that there was to be no hardcore pornography. We nearly turned off instantly, but persisted and watched a few episodes. We recall enjoying it, but can't remember much apart from it featuring Bob Mills doing his Bob Mills thing. 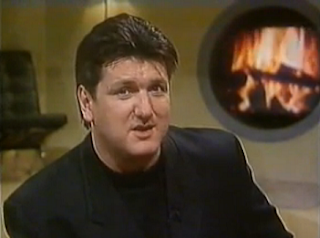 Due to 60 episodes being transmitted, a number of these were recorded off air by late night telly aficionados. Many of these have found their way onto the internet. The majority of them are hosted at www.medinner.co.uk, but sadly we have not been able to get any of these to play. There are, however, several episodes and the 'Wot a Palaver' compilation to be found on YouTube. Setting up camp in our bed with nothing but an internet connection and eager eyes, we reacquainted ourselves with a couple of episodes.

The two different intros - parodying either The Prisoner or The Avengers - are nice little nuggets of pop culture knowingly spoofed by Mills. The sets too are dedicated nods to the past of British TV and indicate a decent budget for the series. However, after a while, you begin to realise that the intros and the sets bear very little relation to the show's core concept. The disjointed air starts here and pervades throughout unfortunately.

For now, though, we'll take a quick look at the man hosting the whole shebang, it's Bob Mills. He brings a laid back, everyman approach to the show with a healthy dose of sarcasm. One sketch sees him chatting to a woman who is complaining that her mother has "All damp in her passage.". It captures Mill's persona perfectly. This teasing sarcasm is put to good effect when he's viewing the archived footage and can bang out the tongue in cheek barbs. These sections are easily the best and we wish more had been made of this.

Our main problem with In Bed with Medinner is that it feels rather jumbled. Large sections of the show are given over to Mills wandering round his flat examining random objects. Mills always has a story to tell about them, but most of the time they're painfully contrived gags. We suspect they're being told with a knowing wink (at least, we hope they are), but they add little and feel like filler. Some lead on to brief little sketches, but again, these feel rather redundant and hold up the archived footage sections. The inclusion of live bands in series 2 highlights how the production team really didn't know what type of show they wanted to make - was it chat show, clip show or variety show? We had difficulty clarifying what it is and just settled at 'comedy'.

In Bed with Medinner is... ok. It's not brilliant, but neither does it give us a stitch. The show dithers a bit and this leads to the viewer's brain entering sluggish territory. The production team should have done more to sharpen the focus of the show - they had four series to do this, but it barely evolved. Reviewing TV footage would be perfected by TV Burp a few years later and it outclassed In Bed with Medinner in every way. It's not a show that's without charm and it does contain a few gems, such as the Northern boxer turned actor stalking car showrooms in search of a sponsored car. We would recommend watching it, but be prepared to hover your finger above the fast forward button.
Posted by Telly Viewer at 12/28/2013
Email ThisBlogThis!Share to TwitterShare to FacebookShare to Pinterest