The House of Windsor 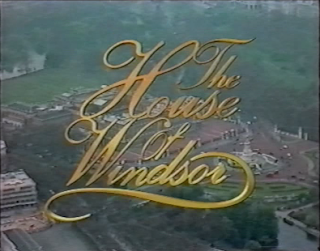 Here at Curious British Telly we've encountered a  fair bit of scandal over the years. Only last week we were caught eating a grape in Tesco without paying for it. Luckily, our fame doesn't spread too far, so the news barely made the tabloids. What if we were more famous though? And we're not talking Brian Cant famous, we're talking 'head on a 10p piece' famous. We've all cupped our ears towards a royal scandal, but what about the people trying to suppress this attention? To meet them, take your shoes off and enter The House of Windsor. 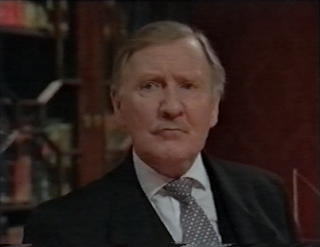 The Royal Family's affairs are managed by the steady hands of Lord Montague Bermondsey (Leslie Phillips) and Sir Nicholas Foulsham (Neil Stacy). They head up a loyal team at Buckingham Palace who fawn to their wealthy employers and maintain damage limitation to their good name. Prince Charles, however, is rather fed up with the pasting his family keeps receiving from the tabloids. Taking matters into his own hands, he employs Max Kelvin (Warren Clarke) aka "the spitting cobra of Fleet Street" to protect, and therefore improve, the Royal Family's image. 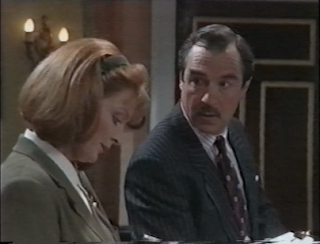 The House of Windsor was a Granada production which aired in 1994 and was six episodes long. To give the show a topical edge, episodes were recorded 48 hours before transmission. The series was directed by Graeme Harper who has also directed episodes for shows such as Doctor Who, EastEnders and Grange Hill to name but a few. Episodes were written by a number of different writers, the most famous being a young Russell T Davies. The series has never received a commercial release.

Curious British Telly can't remember the show airing at all. Back in 1994 we were probably more concerned with the upcoming World Cup and our school trip to France. Fast forward 19 years and we were still none the wiser about the show. Then, fortuitously, we received a DVD housing several rare ITV sitcoms. The House of Windsor was one of them, so we put on our ermine robe (Monster Munch t-shirt) and sat down upon our throne (bed) to give it the once over. 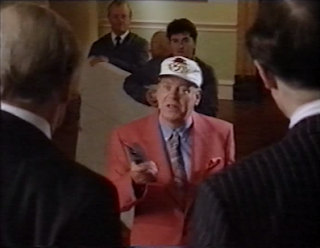 The House of Windsor is packed full of sublime performances. Leslie Phillips brings his usual suave charm to the role of Lord Montague and Neil Stacy has an impressively stiff upper lip on show too. Warren Clarke's gregarious, wideboy charm is the perfect contrast to the two toffs and creates a healthy level of conflict. Sean Gallagher who plays Ray Barker (part of the lowly house staff) injects the character with a level of 'jack the lad' brio last seen in a 70s sitcom. It was his first recurring role and he's been working steadily ever since. The rest of the cast give admirable performances including one of the final hurrahs for Preston Lockwood.

Taking aim directly at the Royal Family through a sitcom would be a risky prospect. There's enough royalists out there to destroy ITV with bricks if offended. Therefore, choosing to look at the people around them allows more subtle digs. Recording the show 48 hours before transmission gives the writers more license to be biting - an approach which helped give Drop the Dead Donkey a real edge. Had The House of Windsor been recorded during the Royal's 'annus horribilis' of 1992, it would have really given the beast teeth. Sadly (for us, not them), 1994 was a rather quiet year for the Royal Family. We can't blame the writers for this, though, it's just the luck of the draw. 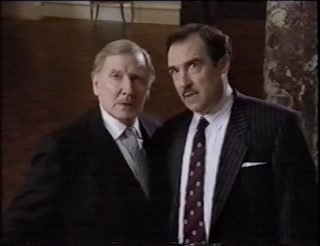 We guffawed a few times throughout the episode as there's some decent, if not sparkling, writing on show. Some of the jokes do sink into predictable territory, though, which is disappointing - Prince Edward is frequently ribbed for his 'ambiguous' sexuality, The Queen Mum likes a drink and Prince Charles is planning secret liasons with Camilla. Even in 1994 these jokes were scraping the barrel, so today they seem very amateurish indeed. There's enough decent jokes present, though, to keep us entertained rather than groanin.

Despite the ensemble cast all being very talented, there's just too many of them. Lord Montague and Sir Nicholas are essentially the same character. They're both acting as a foil to Max Kelvin, so one of them could easily have been disposed of. The same could be said of Caroline Finch (Serena Gordon) and Giles Huntingdon (Jeremy Sinden) who are both delegated various tasks by Lord Montague and Sir Nicholas. A bit of streamlining to the cast could have led to sharper, more direct episodes. 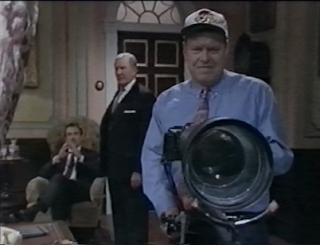 Overall, we found The House of Windsor to be a decent enough sitcom. It's not spectacular, it's not depressingly bad. Our main issue with it is that it never fulfils its main aim of skewering the Royal Family and their staff. Yes, Minister, of course, wrote the rulebook on how to satirise the Establishment, but here it's sadly lacking. The humour on show isn't too bad and, thanks to the great performances, we would be interested in viewing more episodes. If anyone can help, then get in touch!
Posted by Telly Viewer at 12/18/2013
Email ThisBlogThis!Share to TwitterShare to FacebookShare to Pinterest