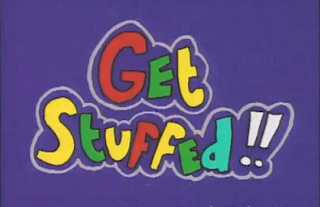 It's a common complaint that there's too many cookery programmes on television these days. As we watch nothing but archived television 24/7, we're not too bothered about contemporary TV schedule monotony. Also, we love cooking so ain't never complain of new and mouthwatering ways to manipulate a humble rump steak. The people who do complain are the same people who make tuna pasta bake with crisps crumbled on top i.e. culinary peasants. Perhaps a TV show is needed for these people. Perhaps their saviour lies way back in the early 90s with Get Stuffed. 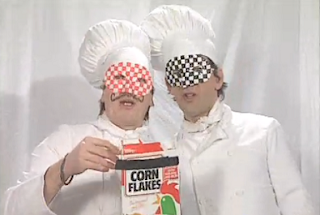 Get Stuffed is as bonkers as a French chef who's hit the cooking sherry rather hard and tried to commandeer a set of traffic lights. But don't worry, this ain't exactly some exercise in avant-garde cookery, the central premise is ridiculously simple: students - aka 'them young people' - are given five minutes of fame to cook up a meal which not only tantalises the tastebuds, but also minimises the damage on their student load - which is obviously reserved for booze.

Episodes usually start with the manically cheerful students out on the street introducing their recipes with a level of enthusiasm that even children's TV presenters would struggle to match. Bounding off to the shops they bamboozle petrified shop owners who just wanna get them off their promises sharpish. Pogoing back to their grubby and potential E.coli holiday camp kitchens, they proceed to cook up a cheap, quick and so called 'tasty' meal.

The recipes are accompanied by ditties and interstitial cartoons relating to the cooking process. Occasionally, the Mystery Chefs appear with cooking tips, but make sure you have your ear plugs at the ready to deal with them and their insane screeching.

Get Stuffed originally started life as short segments on the now defunct Lifestyle Channel which was one of the early Astra satellite channels. Honing the idea, Last Ditch TV took the format to ITV who aired the series between 1991 - 94. The show usually aired in the graveyard slot, often after midnight.

Episodes were generally between 5 and 10 minutes long and this allowed the series to amass 284 episodes of culinary madness. There was at least one Christmas special which ran to 30 minutes and a recipe book published under the title 'Banquets for Bankrupts'. The series was off air for several years, but 108 of the episodes were repeated on ITV between 2001 - 2005. 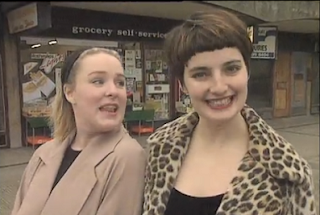 There's very little details online about the people behind the show; quite who devised the show is a mysterious affair. Andy Murrow founded Last Ditch TV and also authored the 'Banquets for Bankrupts' book, but we can only speculate that it was his brainchild. Andy Barber presented and produced the show as well as providing the music, but at no point does he lay claim to coming up with the idea. It's something we're keen to discover and shall continue to investigate in the future.

Curious British Telly was only aware of Get Stuffed thanks to our childhood love of American wrestling. We didn't have satellite television at home, so couldn't watch our beloved WWF wrestling. Instead, we had to settle for WCW wrestling which ITV would air in the graveyard slot on Saturday evenings. Our father would set the video to record the wrestling and, quite often, it would also capture an episode of Get Stuffed which preceded WCW.

We were always a bit bemused by the show as we weren't interested in cooking and we didn't really get what was going on. Sometimes we'd watch it, but at other times we'd fast forward through it to see who Sting was fighting that week. The memory, though, of anarchic energy and lo-fi production loitered in our memory and reminded us of a simpler time.

The only footage online of Get Stuffed is over at the official website (http://www.getstuffed.info), so we duly investigated the clips. 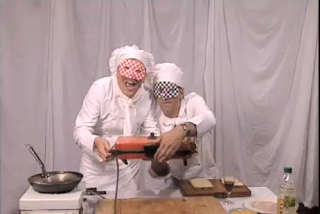 The opening titles feature an oven exploding which - apart from setting the tone for the show - triggered some long forgotten memory. We were taken back to early Sunday mornings in the 90s for a brief second. It's moments like this which remind us why we blog. The students featured in the show are high energy and a bit wacky. One recipe sees a couple of chaps wearing the headpieces from the board game 'Bizzy Buzzy Bumble Bees' for no particular reason. Yeah, they're irritating and sum up why the rest of the population despises students, but if you want straitlaced cookery programmes, seek out Delia, mate.

The DIY ethic is strong throughout and we imagine the show was made for next to nothing. In this time of economic hardship, we would have expected a return of shows like this to our screens. Sadly, production values seem high up on the list for television these days. The internet, thankfully, retains this lo-fi ethic as YouTube shows.

The actual recipes featured on Get Stuffed seem to be post-pub food, but do involve a lot of frying, so be careful kids. They're cheap and cheerful affairs, so perhaps they were of use to the type of people up late enough to watch. Personally, we'll be sticking to our beef wellington stuffed full of truffles. 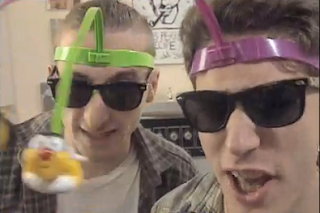 Our favourite bit of the show is probably Andy Barber's songs. They're witty little thrashes reminiscent of an Oi! busker which act as a wonderful side dish to the show's anarchic edge. Students gurning and waving their arms about ain't exactly enough to engage viewers, but chuck in some three chord madness and it makes everything a bit more palatable.

Get Stuffed is indicative of the 90s obsession with lo-fi 'yoof tv' which included The Adam and Joe Show, Fist of Fun and also bears a passing resemblance to Vids and Bits. The episodes are frenzied affairs which have a ramshackle charm and, at such a short length, just avoid grating at your nerves. And, dare we say it, they're more fun than going back to early 90s WCW.
Posted by Telly Viewer at 12/10/2013
Email ThisBlogThis!Share to TwitterShare to FacebookShare to Pinterest