The Strange World of Gurney Slade on Blu-ray 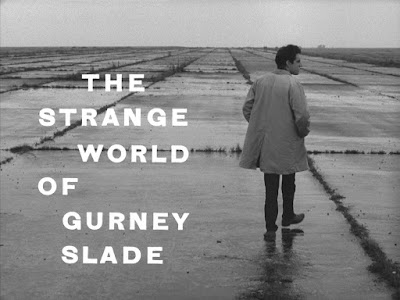 The Strange World of Gurney Slade is, quite simply, mind-bogglingly ahead of its time. It's so modern, clever, funny and meta that it's difficult to imagine what audiences in 1960 made of it. But that's when this ATV comedy, starring Anthony Newley and written by Sid Green and Dick Hills, aired. In a world of black and white, the boundary threshing ambitions of Gurney Slade brought a new dimension to television. Audiences weren't necessarily ready for this new world, but, for the 1960s to evolve into the creative decade it was to become, it needed Gurney Slade hammering on the door early on. And now, 60 years later, Network have released it on an amazing Blu-ray set.

Long established as a cult classic, The Strange World of Gurney Slade has frequently been recommended to me since I started this blog. But I've never quite got round to it. However, the launch of the Blu-ray seemed like the ideal opportunity to acquaint myself with this curious series. And it's fair to say that I'm kicking myself for not getting on board the Gurney Slade train earlier. It's a remarkable work of television and one that deserves significantly more recognition that it has. But, of course, it aired 60 years ago. And it's a rare television show which can establish such longevity in the national consciousness. Hancock's Half Hour, naturally, is perhaps the most successful due to its establishment of the modern British sitcom, but Gurney Slade is aiming its sights much higher. 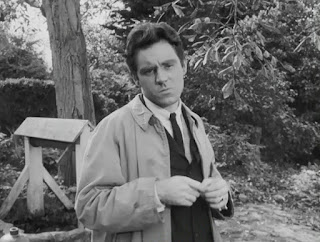 Gurney Slade doesn't take long to establish its raison d'être. The opening scene of the first episode starts with Gurney Slade (Anthony Newley) stuck in the middle of a depressingly upbeat sitcom. But, as the action focuses upon Gurney, he suddenly breaks the fourth wall. And in dramatic fashion. He walks off the set, past cameramen, ignoring floor managers and out into the 'real' world. Or as it's better known: Gurneyland. As an opening gambit it's bold, original and absurd. The chains are unshackled and Sid Green and Dick Hills suddenly have free rein to do what they want - a clause that had been guaranteed by Lew Grade's faith in Newley's potential.

It's a freedom of expression which takes Gurney Slade on a majestic journey through the mind and beyond. The first three episodes are filmed entirely on location and find Gurney navigating his way through abstract philosophies on relationships, romance and family. Whilst set in real world locations such as residential areas, airfields and the countryside, there's something unmistakably offbeat about the way in which they're presented. It's as if the film is running not through a camera, but through Gurney's subconscious and the result is a dreamlike atmosphere. Naturally, it's also funny, but not in your typical setup/gag fashion. Visual jokes are a plenty, inanimate objects strike up conversation and Gurney's own flights of fancy provide observations which are delightfully absurd. 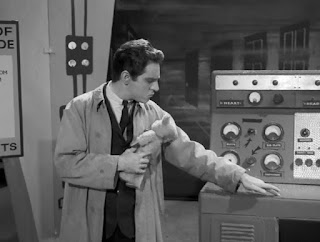 The final three episodes are restricted to the studio, but provide some of the most self-referential moments of Gurney Slade. And, most ambitiously, episode four finds Gurney put on trial for making a television programme which isn't funny. It's a bold move, made bolder still by the muted response it was receiving from viewers, but it's executed perfectly. Focusing the trial on a routine about countersunk screws it has a payoff which is wickedly clever and a testament to the strengths of Green and Hill's writing. The final episode, again, breaks the fourth wall with Gurney, now that the series is coming to an end, having to find future roles for all the characters that have appeared so far. The series closes on a suitably surreal moment which finds Anthony Newley entering the studio and... well... I won't spoil it for you.

Anthony Newley is central to the charm of Gurney Slade and his performance here is strong evidence of the upward trajectory his career was in. A man who can sing, dance and act is always going to be popular, but it's his idiosyncrasies which allow him to stand out as Gurney Slade. Effortlessly comical, the strange terrains and narratives of Gurney Slade allow him to carve out a unique performance here. His acting career on television was regular following Gurney Slade, but there never quite seemed to be an opportunity to highlight his talents as this 1960 oddity. A shame for fans of television, but Newley's career was far from unfulfilled. And his exploits in Gurney Slade - along with his singing style - were an early influence on David Bowie, so that alone is a fine legacy.

And it's important to stress the immense skill with which Network have presented this Blu-ray set. Strangely, for a television series, the entire production was filmed on 35mm film. And this means that the picture quality is breathtaking. The outdoor scenes, in particular, pop with a crispness that makes Gurney Slade look as though it was filmed yesterday. Accompanying the Blu-ray is a booklet (more like a novella) which provides every piece of Gurney Slade trivia you could ever need and a selection of Anthony Newley's other performances from the same era. An absurdist gem of the highest quality, The Strange World of Gurney Slade is essential viewing for any fan of British television.

Posted by Telly Viewer at 12/16/2020
Email ThisBlogThis!Share to TwitterShare to FacebookShare to Pinterest