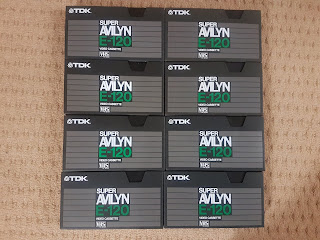 It's been well over two years since my last edition of Archive Tape Digging, but it's not been for a lack of trying. Unfortunately, I simply haven't had many video tapes come my way since 2018 - naturally, this year's pandemic hasn't helped - so there hasn't been much to report. I have, however, pushed back the 'oldest footage found' date a couple of times since the last ATD, but I'm frustratingly still a few months off that big milestone of a find from the 1970s. Well, I did actually find an October 1979 recording of Doctor Who, but aside from 1/3 of a second of a BBC1 ident there was nothing outside of that serial on the tape. Oh and, only today, I found a recording from December 1978. Yes, 1978. But it was just a transmission of the film High Noon - no continuity or anything else around it.

Nonetheless, I have found a few bits and pieces along the way, so thought I may as well collate the most interesting finds here.

Seeing as Christmas is less than two days away, what better place to start than with a Christmas special. And this particular extravaganza comes in the form of Yorkshire Television's The Giddy Game Show. It's not overly different to any other edition of The Giddy Game Show, but all the games have a Christmas theme so that's something. And only a Grinch would complain about the efforts of a children's TV show efforts at Christmas.

Rather unfortunately, it's missing the first 10 minutes but there is still an amazing 30 minutes worth of Billy Connolly at his best here. I actually found this on a tape back in 2017, but only got round to ripping it recently. I think I'd assumed it must already be online, but for some reason it's a Connolly interview which hadn't surfaced.

As part of my research into Puddle Lane for an upcoming book - well, it should arrive assuming this pandemic ends one day - I was lucky enough to be sent a few episodes of the series which were recorded from the original broadcasts. And here's a choice episode which, nearly a year since he died, is a fine testament to Neil Innes talents as the Magician.

1981 - BBC1 Continuity from The Day of the Triffids

Back in August 2019, I went to pick up an extremely large collection of old VHS tapes. These were the ones which contained the 1979 Doctor Who serial I mentioned in the intro. Unfortunately, they didn't turn out to be as amazing as I thought they might. The original owner had, throughout the 1990s, gone back and recorded over many of the original recordings. And they also weren't a fan of leaving adverts in or allowing continuity to be recorded. Most of the time at least. Thankfully, that means I managed to find the original 1981 broadcasts of The Day of the Triffids with accompanying continuity either side of the episodes. That means plenty of idents, Beryl Reid on Blankety Blank and a Mike Yarwood trailer.

Continuity, ancient news and a helping of long outdated weather are three of the things I most like to dig up on a video tape. And this particular tape, which I believe - for the true obsessives - was a JVC E120 - delivered on all three fronts at once. For a while this was the oldest thing I had found on a VHS test - aside from those 1970s recordings of commercially available material - but it no longer holds this crown...

Around a transmission of Call of the Wild - as part of The Wednesday Film slot - I found this continuity which includes a look at the evening's schedule and, following the film, a trailer for coverage of the 1980 World Skating Championships. Neither side of the film's continuity is complete, but I decided to upload it as there was a minute's worth of footage and, of course, it's so old. All I have to do now is find something older and more substantial...

As I'm sure you're aware, I'm always on the lookout for old VHS tapes, so please get in touch if you have some that are taking up space. I'm only really interested in footage that goes up to the late 1980s, so if the tapes are later than this then it's unlikely I would find much use for them. But, who knows, get in touch and let me know what you have.

Posted by Telly Viewer at 12/23/2020
Email ThisBlogThis!Share to TwitterShare to FacebookShare to Pinterest