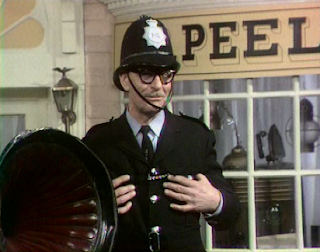 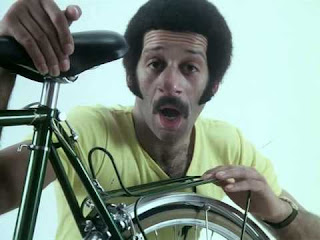 Songs, games and stories are the order of the day in Ring-a-Ding which features Derek Griffiths in a typically sparse mid-70s studio at Television Centre, albeit one with a rather busy background of giant, colourful building blocks. Kicking off matters with a theme tune packed to the brim with bell sounds, whistling and a glorious, rhyming melody, Ring-a-Ding finds Griffiths taking on a clearly limited budget. Wrestling with the limitations imposed on him, Griffiths tells stories with little more than his hands playing various parts, digs out his guitar to sing a song before the budget stretching treat of a story with basic animations, such as The Ugly Duckling, is given centre stage.

Derek Griffiths is a legend of British children's TV and his extensive CV is testament to this lofty position. And, as ever, he's on fantastic form in Ring-a-Ding with his exceptionally personable and cheerful personality lifting a show which is clearly children's-tv-by-numbers-and-on-a-shoestring-budget. There are certainly more iconic children's TV shows, but Ring-a-Ding more than qualifies as a hidden gem of the pre-schooler genre. 13 10-minute episodes of Ring-a-Ding were produced by Peter Charlton and Cynthia Felgate, with the episodes airing as part of the Watch with Mother lunchtime slot. Episodes continued to be repeated up until 1977 on BBC1. 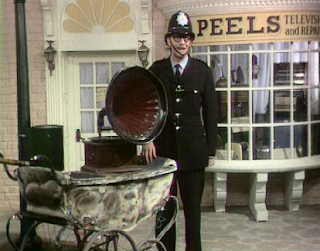 The first series of The Laughing Policeman finds PC254 (Deryck Guyler) holding court outside R. Peels Television and Repairs shop where he dispenses wisdom on the importance of using zebra crossings, recalls the finer details of a Micky Mouse watch he had as a youngster and regales viewers with a brief rhyme about the events of his day. In between all this engaging patter, PC254 refers viewers to a television set in the TV repair shop where an assortment of colourful puppet cats, crows and foxes sing songs such as Yummy Yummy Yummy, Daughter of Darkness and One of Those Songs.

There's a change of location for the second series as PC254 now finds himself out on the beat in a residential area. Stopping by a house, where there just happens to be an old fashioned bioscope for viewing pop videos, it's business as usual for PC254 but this time he's assisted by young Adam who is perfectly placed to be warned about various dangers such as playing near train tracks. 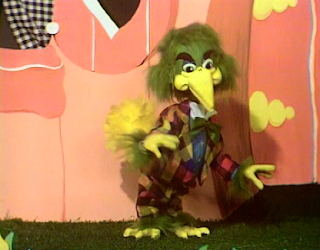 The Laughing Policeman is a curious obscurity from deep within the history of children's TV. Deryck Guyler, of course, is superb in his role as PC254 and delivers an engaging charm as if anything else was a crime of the highest severity. And Guyler had plenty of experience in playing members of the constabulary having taken on several similar roles in the past, his casting as PC Corky Turnbull in Sykes being his most famous.

Two series of 13 15-minute episodes of The Laughing Policeman were produced by Yorkshire Television for ITV, episodes aired in the lunchtime children's slot. The first series was written by Denis Gifford with Gerry Andrews taking over the script duties for the second series. The puppets featured throughout the series was provided by Roger Stevenson's jokingly titled Bow Street Puppets. The Laughing Policeman failed to receive any repeats and has been unseen on British screens since its initial broadcast.

Travelling through space and time, Alias (Richard Briers) finds a huge spanner being thrown in the works when his spaceship becomes trapped in the Earth’s magnetic field and begins to malfunction. With his ship crashing down to Earth, Alias finds himself (and his green, dog-like pet Boswell) stranded in Houghton Bottoms, a medieval kingdom ruled by King Arthur (Brian Trueman) and Queen Edith. 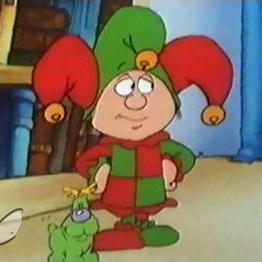 Alias soon makes friends with the befuddled magician Meredith (Brian Wilde) who is trying to summon a Red Knight and is overjoyed when Alias appears out of nowhere. Alias, however, has a pair of feathers upon his head that allows him to fly and Meredith worries that this will draw attention to his extra-terrestrial origins, so disguises them with a jester’s hat. Episodes find Alias, Meredith and Boswell taking on the slimy monster known as the Black Najjer, attempting to rescue Princess Amaranth from the Beast and dealing with an airship full of Vikings.

A lesser known instalment from those masters of animation at Cosgrove Hall, Alias the Jester isn’t as hilarious as Count Duckula and lacks the intense charm of Wind in the Willows, but, frankly, very little television matches this. Instead, Alias the Jester is a harmless affair than contains just enough entertainment and, thanks to the superb voice work on offer, never outstays its welcome. Written by Brian Trueman, Alias the Jester consisted of 13 10-minute episodes which were produced by Cosgrove Hall for Thames Television. The original run of the series came as part of the Children’s ITV schedule with episodes airing in a 5pm slot. Episodes were repeated up until 1987. 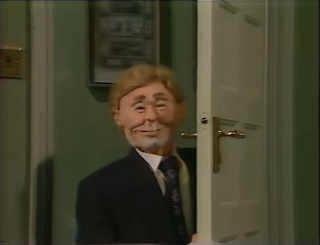 Piers Blister (Richard Coombs) is the bumbling Minister for Science who, when he isn’t under the domineering eye of his mother Lady Blister (Francis Wright), has a secret lab deep beneath the ministry in an abandoned tube station where a crack team investigate various scientific practices. Human hosts Terri (Liz Campion), Lavinia Jayne (Daphne Waring) and Lester (Michael Buffong) work alongside the genius puppet Professor Shackleton (Kevin Bradshaw) and the investigative puppets Frog (Kevin Bradshaw) and Rat (Francis Wright). Feeding back their findings to Piers, the team tackle concepts such as polarised light, internal combustion and lung capacity with a series of experiments and trips out to the Science Museum. 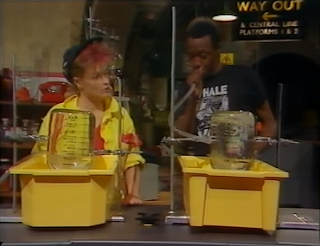 Panic Station falls somewhat below the radar when it comes to late afternoon educational shows, but it’s highly entertaining with its balanced mixture of comedy and education. And it’s probably one of the few children’s TV shows to casually discuss Socratic irony, which is always a boon. 21 episodes, each running to 25 minutes, were produced by Television South across two series with the episodes written by Lucy Raby (No. 73, Motormouth) and Michael Barfield (Saturday Superstore, Spitting Image, Dennis the Menace and Gnasher Show). The puppets, which bear an uncanny resemblance to the Spitting Image puppets, were created by Chris Maughan. Panic Station was part of the Children’s ITV schedule and episodes went out at 4.50pm. 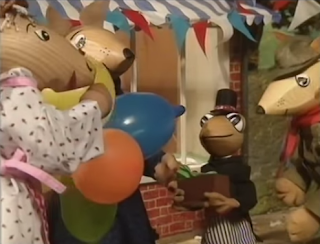 Tales of Aesop, not surprisingly, is based upon the tales of the ancient Greek storyteller Aesop. However, whilst his original fables were set in the world of ancient Greece, Tales of Aesop transports his perennial morals and teachings into the modern world. And it’s a modern world populated by wooden hand puppets of various animals including Geraldine Donkey, Cedric Tortoise, Joshua Goat, Hubert Hare, Ferdie Fox and Boris the Lion. In between mowing lawns, going camping and dancing at the local carnival, these anthropomorphic chaps and chappettes find themselves acting out some of Aesop’s most famous tales such as The Hare and the Tortoise, The Town Mouse and The Country Mouse and Cry Wolf. All of these fables are narrated by Tom Baker.

There’s no such thing as bad Tom Baker, so Tales of Aesop gets off to a good start with his rich, trademark tones guiding the action. The puppets involved in these retellings have a simple, but cute allure and the sets they’re brought to life in are nicely detailed. And you can’t really go wrong with Aesop’s fables when it comes to dispensing life advice. There’s not really anything new in Tales of Aesop, but it’s a pleasant enough watch for young children. 13 five-minute episodes of Tales of Aesop were produced by Matrix Productions with the series going out on BBC2 in the Friday 1.20pm slot. Episodes of Tales of Aesop were regularly repeated in the early morning and lunchtime slots up until March 2000.

Look out for future editions of The Forgotten World of British Children's TV and, if you've got any questions, feel free to get in touch through the comments below. And, as ever, suggestions for future editions are gladly welcomed.
Posted by Telly Viewer at 12/09/2018
Email ThisBlogThis!Share to TwitterShare to FacebookShare to Pinterest