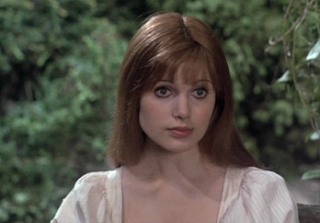 Today I ventured over to Birmingham for the latest Kaleidoscope event in order to indulge in my most favourite pastime: watching decades old telly which hasn't been aired in decades. Kaleidoscope hold these events every three months at Birmingham University and, as with all events that know what they're doing, each one has a theme. And today the theme was Madeline Smith, an actress who starred in several films (including the role of Roger Moore's first ever Bond girl) and numerous television series from the 1960s onwards.

Now, I have to come clean and admit that I had never heard of Madeline Smith previous to this event, but, you know, I can't know every single person involved in the history of British television. Yet. Anyway, whilst I was not aware of Madeline Smith, it appeared that there was an appreciation of her running in my blood. For, when I told my mother that I was going to be seeing Madeline Smith (yes, she was present at the event), my mother informed me that my Dad had been a big fan (as I imagine most Dads were) of Madeline Smith.

And, following today's sojourn to Birmingham, I'm now a fully paid up member of the Maddy Smith fan club. Yes, she's gorgeous, absolutely gorgeous in a way which epitomises 1960s/70s glamour and beauty, but she's also appeared in some fantastic slices of television. And she's got plenty of amazing stories to boot.

So, the actual event. First up was a 1968 ITV murder mystery show entitled Who-Dun-It which centred around occult practices and the death of a number of young school girls. The pacing was a little old fashioned and everyone spoke ridiculously well, so it's very much a product of its era but harmless enough and there were a few creepy scenes featuring the black arts. Next up was perhaps the most well received programme that was shown and that was Madly In Love, a 1972 play by Anglia which was transmitted as part of Sunday Night Theatre.

Written by Paul Abelman, Madly in Love finds struggling poet Angus MacFee (Richard Beckinsale), who is currently employed as his doctor friend's general dogsbody, masquerading as a qualified doctor. His aim, of course, is to spend time with Mary Todd (Madeline Smith), a patient - female and 22, so right up his alley - who suffers from an obedience disorder whereby she obeys every command, no matter what it is, and then immediately forgets performing it

MacFee's aim is, well, to command her to sleep with him. And that's where it begins to clash with 21st sensibilities. Actually, you could say that the opening scenes which find MacFee dreaming about a neverending stream of suspender-clad women is where you realise it's a different age.

So, yes, the play is essentially about MacFee attempting to, in a nutshell, have non-consensual sex with Mary. Sure, there's a subplot about Mary's father Reginald (Michael Bates) attempting to cure his tick before he has to give a speech to a room full of executives, but that's very much in the background. Bates does, however, provide a masterclass in physical comedy towards the end of the play and, believe me, it's an absolute joy.

The objectivity of women in television, though, is so blatant that, with the #metoo movement in full swing, it's difficult to understand how these could be described as 'innocent times'. Mary is dressed exceptionally skimpy and there are several reveals of her knickers which, again, are a little skimpy. Regardless of this, though, MacFee comes a cropper and his nefarious schemes backfire on him, so it's not a work of pure misogyny by any stretch of the imagination. And it's funny. I'd certainly watch it again thanks to the fantastic performances and because the dichotomy between Madly in Love and today's ethics is so intriguingly enormous.

As I mentioned earlier, Maddy was attending the event and there was an hour set aside for Chris Perry of Kaleidoscope to chat to Maddy about her career. This provided a fascinating insight into Maddy's life and acted as a perfect excuse for her to air plenty of her anecdotes - my particular favourite involved Tom Baker forcing Eric Morecambe to stay up into the wee hours, while filming The Passionate Pilgrim, in order to hear more and more of Morecambe's extensive anecdotes.

Sadly, I had to head home after this section of the event, so I missed out on a few more programmes featuring Maddy but, hopefully, I'll get to acquaint myself with them one day.
Posted by Telly Viewer at 10/07/2018
Email ThisBlogThis!Share to TwitterShare to FacebookShare to Pinterest