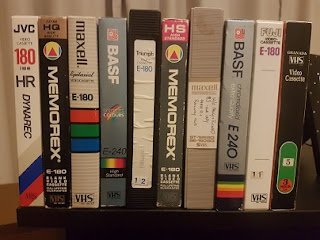 It's been a little while since my last update on my exploration of forgotten TV recordings, but rest assured I've been busy delving through tape after tape. Well, at least, I've been doing this when I can as life is a busy old game and, by the end of the evening when the house is quiet and toddler free, I'm usually far too knackered to dig out all my equipment. However, it would be impossible for me to give up my most peculiar of hobbies, so it continues slowly but surely.

I'm still on the lookout for any old tapes you may have knocking about in cupboards, lofts and garages, so please, please get in touch. If they're from the 1980s then I'm going to be highly interested in them and if they're from the late 1970s (aka the earliest days of VHS) then I'll bite your hand off (or give you a shoulder massage at the very least). A couple of weeks ago I picked up a small collection of tapes and found recordings going back to 1981, so there's clearly still plenty out there.

Anyway, my plea for magnetic tape fulfilled for the month, here's what I've found this month.

I've found plenty of little snippets of TV-am here and there in my time as a VHS archaeologist, but this is my first lengthy clip and, by jove, it's a good one. Starting off with an informal chat with a ridiculously handsome Christopher Reeve, the action soon shifts to an even bigger superstar: Roland Rat who is joined not just by Christopher Biggins, but also the latest contender for Roland Rat impressionist extraordinaire. Curiously, almost 95% of this clip is already on YouTube, but it appears to have been recorded directly off a TV screen using a mobile phone. Thankfully, my offering is a little easier to watch...

This was a very exciting find and, despite not being complete, contains a substantial chunk of a rare interview with the highly private Rowan Atkinson. Only a few years into his career here, Atkinson is softly spoken and doesn't reveal too much about himself aside from the usual biographical titbits, but it's still a fascinating peek into his life. And his entrance onto the stage is vintage Atkinson.

In a rare move, I've been unable to accurately date these clips from Pebble Mill at One, but they're from an episode dating from 1981. The footage features the end of an interview with artist Alwyn Crawshaw before moving onto the very exciting juggling act known as The Flying Karamazov Brothers. I don't get much of a chance to watch daytime television these days and, when I do, it's usually CBeebies, so I'm not sure if there's anything to rival Pebble Mill at One but it seems to be consistently fantastic. If you've got any more footage from it's rather long run then get in touch.

Whilst we're on the subject of my love for Pebble Mill at One, I'll tell you a little story. Way back in the mid 1980s, when I was little more than a toddler, I ABSOLUTELY HATED Pebble Mill at One. The reason for my ire wasn't anything personal against the programme or the presenters, but more the fact that I had to sit through it until the children's programmes came on at 1.45pm. To the three year old me it felt like the longest and most mindnumbing waste of my time. It's funny how our tastes change as I now can't get enough of it.

Neil Kinnock never did manage to display Thatcher, but he certainly gave it his best shot and, by the mid 1980s, was keen on securing the youth vote hence his appearance in Tracey Ullman's music video for her single My Guy and his subsequent cameo on The Tube with Jools Holland and Leslie Ash on presenting duties.

Before the much more successful and well remembered Wide Awake Club, the Saturday children's section of TV-am was labelled as Data Run with it's wonderful theme tune written and performed by Yazoo. Little footage of Data Run is online, but I was lucky enough to unearth the last 20 minutes of one episode at the end of an old VHS tape. There's a quick look at the upcoming 1984 Toy Fair and a wonderful interview with Dave Hill and Noddy Holder who are dressed like absolute rockstars. Oh, and there's also an ad break which features Captain Sensible on fine form.

There's very little discussion about 16 Up online and no footage, so it's finds like these that I really love to dig up. A curious slice of yoof TV, 16 Up gathers together young people and gets them to discuss subjects that are weighing heavy on their young minds. In this particular edition, the subject is relationships and, in amongst the chat, there's time for interstitials featuring a young Linda Robson and poetry from John Cooper Clarke.

And that's it for this month, I hope you enjoyed the clips. More to come in the future. Hopefully...
Posted by Telly Viewer at 9/27/2018
Email ThisBlogThis!Share to TwitterShare to FacebookShare to Pinterest