The Gnomes of Dulwich 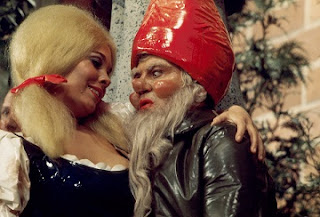 The Gnomes of Dulwich was recently voted the 35th most wanted missing TV programme, but how much do we know about it? After all, it's not been seen on our screens since 1970, so it's no surprise that memories relating to it are vague at best. It doesn't help that all six episodes are missing either. However, it's a programme that generates a significant amount of interest thanks not only to the handful of curious publicity shots that survive, but also the talent involved. Naturally, it's a show that's been on Curious British Telly's radar for some time, so I had to take a look at it.

Living in the front garden of two "human beans" at 25 Telegraph Road, Dulwich are three stone gnomes positioned around a pond. Big (Terry Scott) is a somewhat haughty gnome who believes he has a deep and rich understanding of the human beans' behaviour whilst Small (Hugh Lloyd), who proudly carries a frog, is a more friendly, yet naive gnome. Joining Big and Small is Old (John Clive), a much older gnome who is rather sleepy, but retains a keen eye for the ladies.

Whilst a fair amount of Big, Small and Old's day is spent debating and analysing why the humans spend Sundays washing their cars and their evenings partying, considerable time is also allocated towards discussing the plastic gnomes (made in China) who live next door.

The outgoing, wisecracking Plastic (Leon Thau) is their leader and is most frequently spotted with the two bubbly and touchy-feely female gnomes Dolly (Anne De Vigier) and Rita (Lynn Dalby). Whilst Small and Old are rather intrigued by their plastic neighbours, Big dismisses them as plastic Chinese twits. Big does, however, permit their company, temporarily at least, when he becomes smitten with a plastic mermaid they bring along to a party.

Together, the gnomes find themselves seeking advice over the ethics of holding a girl gnome in their arms from the wise Tope Gnome (John Laurie), ending up in a jumble sale alongside a bust of Napoleon (Jimmy Perry) and taking up residence in the garden at 10 Downing Street. Jeopardy also rears its ugly head when an identical version of Big turns up in the garden and there's also time for some small-scale war with Big crying "Once more into the breach, dear gnomes!"

Written by esteemed comedy writer Jimmy Perry (Dad's Army, It Ain't Half Hot Mum and Hi-de-Hi), six episodes of The Gnomes of Dulwich were produced with the initial pilot episode recorded in December 1968 and the following five episodes in Spring 1969. The series had originally started life as a sketch written by Perry, but head of BBC Comedy Michael Mills saw something in it and commissioned a full series.

The series, which was fully recorded and transmitted in colour, first aired in May 1969 on BBC2 in an 8.50pm Monday slot. Curiously, in the middle of the series, the cast appeared in an episode of Ray Alan's quiz show Give Me Your Word where they took on the cast of Not in Front of the Children in a battle of words and wit. The Gnomes of Dulwich received just one repeat airing in 1970 when it aired on BBC in a 10pm Monday slot. All episodes were later wiped from the BBC archives. 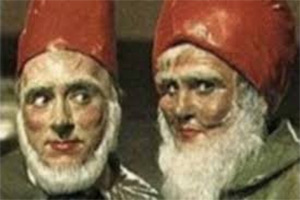 A unique element of The Gnomes of Dulwich was that it was one of the first British television shows to implement the then new technology of Colour Separation Overlay (CSO) or, to most laymen, bluescreen. The equipment required had recently been installed in Television Centre's studio 8 and this was where filming for The Gnomes of Dulwich took place. The CSO was used sparingly throughout the series, mostly to overlay the 'giant' human legs against footage of the 'tiny gnomes'. This novel process proved to be of great interest to several BBC department heads who requested demonstrations of how The Gnomes of Dulwich used this the technology.

Despite the revolutionary technology and the stellar cast, The Gnomes of Dulwich failed to truly ignite the imagination of the British public. An audience research report conducted by the BBC scored the final episode with an overall rating of 61 (as a benchmark, episodes of Fawlty Towers achieve scores of 80+) and a muted response from the viewers.

The overall impression of the series was that it was childish, contained too many smutty jokes and, most frankly, one viewer described it as "absolute rubbish". Praise was reserved, however, for the performances of Terry Scott and Hugh Lloyd whilst the marked improvement in quality of the final episode - featuring much satire - indicated that a future series could prove more successful.

Tracking Down The Gnomes of Dulwich

As with so much missing television, there's a certain romance and tragedy attached to The Gnomes of Dulwich. Although, in retrospect, it's difficult to condemn broadcasters for not running themselves into bankruptcy by purchasing vast amounts of videotape and preserving every second of television, it's hugely disappointing that so much of our cultural heritage has been lost.

The Gnomes of Dulwich is a case in point with the entire series being wiped from the archives and leaving many unanswered questions. There have been murmurings that an audio recording of one episode exists, but if it does then no one's entirely sure where it is. Thankfully, the scripts for all six episodes have been preserved. And, a few months ago, I was lucky enough to read through the shooting scripts for the first two episodes while I was at the BBC Written Archives.

What struck me, almost immediately, was that these two episodes of The Gnomes of Dulwich could never be produced in the 21st century. While there's an interesting, and somewhat prescient, message regarding Little Englanders' opinions on immigration, it soon loses any satirical clout due to the cavalcade of sexist and racist jibes ingrained into the script.

The female gnomes, for example, offer very little aside from giving the male gnomes something to salivate over. Choice dialogue from Dolly includes "Hey Boys! - How about you taking us out tonight and having a bit of flun (sic)" so it all chimes very oddly with 21st century sensibilities. Their manner of dress, from what I can judge from the remaining shots, is also highly objectifying with cleavages pushed to the fore. In the pre-production stages, a member of the BBC expressed confusion as to what a Dolly gnome would consist of, but suspected that they would be "willfully erotic". So, yeah, mission accomplished...

And, yes, there are plenty of instances of caricatured Chinese language being played for laughs by the plastic gnomes. Therefore, you can expect to hear "frog" mispronounced as "flog" and Plastic commencing his dialogue with "Ah so!". Leon Thau, heavily accented here, has no connection the Far East (he was born in Palestine), but played several 'sinister foreigner' roles in his time, notably Ho Lung in the Legacy of Death episode of The Avengers. While I sincerely doubt that Perry is racist, it appears to be more a legacy of the times. A legacy which would also render It Ain't Half Hot unrepeatable for the last few decades. 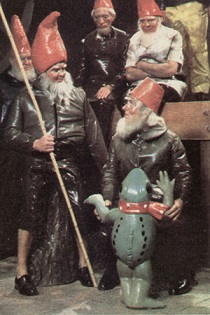 Moving all the outdated cultural missteps aside, though, what are the actual scripts like? After all, this is Jimmy Perry, a master of the comedy script. A man who understands the concept and build of a gag like precious few others. Unfortunately, Perry, just like the very best in any trade, can have an off day. And The Gnomes of Dulwich is one of Perry's rare off days.

The narratives are slight with the stakes barely being assembled let alone stacked up, so episodes soon get trapped down a cul-de-sac of mediocrity. There's also a glaring lack of twists with the path of each plot being so linear you can practically see the final scene from the start of the first scene. The second episode, for example, finds the gnomes debating what a party is and then throwing a party. And that's it. I can't embellish it any more than that. Well, aside from the fact that they play a game of hide and seek in the middle which appears to be for no other reason than to pad the running time out.

Little excitement in terms of the episodes, but what about laughs? Sadly, again, this is an area of The Gnomes of Dulwich which severely suffers from any sense of frequency or success. And, for a sitcom, that's flatline territory. I guess that some of the bickering between the gnomes has its moments, but far too often it resorts to smut such as Old and Small constantly alluding to the fact that they would like to get their end away. Naturally, Scott and Lloyd would have wrung some mileage out of this thanks to their chemistry and standalone skill, but, even if the script is peppered with directions such as BIG REACTS, it's just not enough.

I am, of course, judging The Gnomes of Dulwich by the scripts and purely the scripts. Perhaps, coupled with visuals and acting, the whole affair is much more enjoyable. Part of me, though, remembers all those evenings I've spent laughing like a crazed gibbon at the scripts for Fawlty Towers, Blackadder and Peep Show. That's what you call a good script, one that you can laugh at on paper. However, maybe this is a little unfair. Not only are they three of the best sitcoms ever, but I've seen them performed. I know the characters inside out, the delivery of each line is perfectly honed in my mind and I can appreciate everything thanks to this knowledge.

Saying that, you don't have to be the chief commissioning editor of the BBC (is that a genuine role or have I just made it up?) to be able to pick out a half decent script. And, although it feels sacrilegious to say so, it feels as though Jimmy Perry has served up a half baked sitcom which fails to engage or even remotely entertain in The Gnomes of Dulwich.

Forgotten sitcoms from the 1960s are ten a penny, but their forgotten status doesn't necessarily reflect on their quality. The few remaining episodes of Beggar My Neighbour, for example, provide a funny satire on the sensibilities of British class, but this series isn't even in the top 100 wanted missing TV programmes. The Gnomes of Dulwich, however, despite its apparent lack of quality, retains a curious mystique about it. I suspect that the major contributing factor behind this curiosity is simply down to the bizarre concept on offer. After all, when else are you going to get the chance to watch a gnome based sitcom?

Despite my misgivings about the series, I genuinely hope that footage of The Gnomes of Dulwich surfaces one day. The preservation aspect aside, there's a genuine interest in the series for many reasons. It's intriguing to see how Terry Lloyd and Hugh Scott adjusted to life after Hugh and I, there's the early days of colour television to cherish and, of course, we have the introduction of CSO, without which, Doctor Who would have looked very different in the 1970s. In terms of a stand alone sitcom, however, I suspect that even with the series fully realised on screen, it would still fall well short of anyone's all time favourite sitcoms.
Posted by Telly Viewer at 8/30/2018
Email ThisBlogThis!Share to TwitterShare to FacebookShare to Pinterest