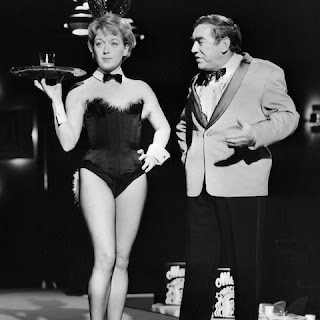 Hancock’s Half Hour was the first modern sitcom and, consequently, it turned Tony Hancock into the first star of British sitcom. With his hangdog expression and downtrodden personality, he encapsulated everything that, even to this day, is painfully funny about being British. As is well known, the tragedy that played out at 23 Railway Cuttings, East Cheam was refracted into an even more sorrowful angle in Hancock’s personal life. Spiralling into a destructive alcoholism, Hancock committed suicide in June 1968 while living in Sydney, Australia. His relocation to Antipodean climes had been a disastrous attempt to re-ignite his career in Hancock Down Under, but his final British TV series had aired a year previously in the guise of Hancock’s.

Hancock’s finds Hancock running his own nightclub, Hancock’s, which offers food, drink, dancing and a number of parking problems outside. Hancock claims that the club is his personal reply to Swinging London, after all, he’s always been a bit of a raver. Described as having an ambience which is akin to Eamonn Andrews with food, Hancock’s promises to deliver an inimitable brand of raving every night. Until 9pm. 9.30pm on Saturdays. Oh, and their drinks range from Napoleon brandy through to brown ale and even methylated spirits. 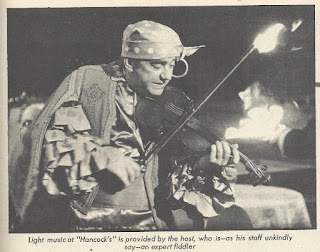 One man, of course, can’t run a nightclub on his own, so Hancock is joined by a staff who, although they may not respect him, do at least turn up. Toulouse (Joe Ritchie) is the long suffering restaurant manager who finds himself having to manage topless waiters and appear in Hancock’s impromptu performance of King Lear. Heading up the waitress staff is Miss Esmerelda Staveley-Smythe (June Whitfield), a waitress who takes her workplace fashion cues from the USA and, accordingly, dresses as a bunny girl. Hancock, of course, is horrified by Staveley-Smythe’s attire as he wants traditional British waitresses: slow, rude and offensive. Finally, the house band, who are reluctant to play due to Hancock’s reluctance to pay, are led by Nat Temple.

With so many different elements at play, it’s no surprise that running Hancock’s is a tough ask for poor old Tony. When he’s not having to dress up as a Romany gypsy and fiddle the night away, Hancock can just as easily find himself being arrested for a desertion charge going back to 1904. And that’s all before he has to deal with his customers, who are prone to arguing the merits of apple crumble over crepe suzettes and causing havoc in the coatroom over a couple of macs and a camel coat. Acting as a brief interstitial to all the bickering and chaos taking place, Hancock’s provides cabaret in the form of performances from singers including Marion Montgomery, Frankie Randall and Vikki Carr.

Hancock’s was a six episode series which was produced by ABC Television for ITV and was transmitted on Thursday evenings in the summer of 1967. The writers of Hancock’s – John Muir and Eric Geen – were no strangers to working with Hancock as they had previously written Hancock at the Royal Festival Hall and The Blackpool Show. Aside from their work with Hancock, the duo had also written together for Tommy Cooper on Cooperama and, individually, they would go on to write for Kenneth Williams, Dick Emery and The Two Ronnies.

Talking to The Tony Hancock Appreciation Society in 2018, Eric Geen revealed that he and Muir had a close relationship with Hancock and, for a time, Hancock took up residence in their flat, sleeping on the couch. Having been very pleased with the scripts that Geen and Muir delivered for The Blackpool Show, Hancock was keen to continue working with the young writers. Geen explains that he and Muir were well aware of Hancock’s love of variety, so they decided to structure something around this for Hancock’s. With a variety framework in place, this also allowed the series to bring in different performers and limit the reliance on Hancock, whose alcoholism was getting steadily worse.

Installed not only as on-set writers, but now as Hancock’s minders, Geen and Muir began to see a different Hancock during the filming of Hancock’s. No longer the warm, friendly individual they had first encountered, Hancock was now turning nastier with each bottle of vodka he downed. It was an unenviable position to be in, as Geen remembers, due to ABC expecting the writers to keep Hancock’s behaviour in check. However, Geen and Muir didn’t want to take a management role, they simply wanted to write and maintain their relationship with Hancock. Following the end of Hancock’s – and there was no discussion of a further series – Hancock departed for Australia, but remained on good terms with Geen and Muir.

The drama and intrigue of Hancock’s doesn’t end purely with Hancock’s disastrous contribution. Whilst, thankfully, the soundtracks to the entire series remain extant, all visual footage is missing believed wiped. Well, that’s not entirely true as, in the mid-1990s, a few minutes’ worth of the 29/06/1967 episode were discovered by video restoration expert Terry Martini-Yates.

Having received several reels of tape that originated from the Sony CV2000, an early domestic video recorder from the late 1960s, Martini-Yates discovered, at the end of a reel, the only surviving fragment of Hancock’s. The footage is freely available on YouTube and provides a final, curious glimpse of Hancock on British TV.

Is Variety the Spice of Life?

The fact that Hancock’s Half Hour still feels relevant (and is uproariously funny) sixty years on from its initial transmission is why Tony Hancock remains a fascinating figure. It helps that it was written by Ray Galton and Alan Simpson. What didn’t help Hancock is that he severed his relationship with these two masterful writers in 1961. An actor – even one of Hancock’s quality – can only ever be as good as his scripts and ATV’s 1963 series Hancock is strong evidence of what happens when it goes wrong.

By 1967, Hancock had been limping along for several years with only the disappointing role of compere on The Blackpool Show and his disastrous attempt at stand-up in Hancock at the Royal Festival Hall putting him centre stage. Given his alcoholism at the time – Geen remembers finding him surrounded by empty red wine bottles one evening – granting Hancock a leading role in a new series wasn’t the shrewdest move on ABC’s part. However, with Hancock claiming he was on the wagon, it’s no surprise ABC were eager to work with an actor who was still held in great affection by the British public.

Unfortunately, for all involved, it would prove to be a disaster. The variety format was meant to provide a crutch for Hancock’s unpredictability, but all it brings to Hancock’s is a jumbled mix of ideas. Too much time is focused on creating sketches for Hancock to demonstrate his comedic prowess, but they’re paltry affairs which focus upon little more than debates with customers about haricot beans and arguments with the house band. It’s a galaxy away from the delusional aspirations and exploration of the self that Hancock’s Half Hour packaged up as the perfect comedy.

That’s not to say there aren’t funny moments in Hancock’s. Geen and Muir certainly know how to write a funny line and there are flourishes of hilarity. Hancock’s revelation that he had to stop beat groups from performing at his club due to the electric bill is pure Hancock. Likewise, the police raiding the club and attempting to arrest Hancock for possession of mind altering substances (while he’s dressed as a folk singer) certainly raises a few smiles. Sadly, these laughs are in short supply and are hidden amongst generous helpings of what can only be described as mundane bickering.

Hancock’s performance also merits discussion due to the horror stories regarding his behaviour during his last few years. In The Blackpool Show, a year earlier, Hancock had been unable to recall the name of a guest he was introducing and, a few months after Hancock’s finished, he fell into an orchestra pit while on stage in Australia. Hancock’s performance in Hancock’s is marginally less disastrous, although his voice sounds strained at times and he fluffs at least one line. There are glimmers of the old brilliance, but it’s blunted and clumsy where once it was effortlessly precise.

The change in Hancock’s physical appearance, though, was much more apparent. Close-ups had previously worked to his comedic strengths, but the camera now revealed little more than a man out of shape. Nonetheless, Hancock demanded that close-ups were filmed due to the popularity they had brought him in Hancock’s Half Hour. At a later screening, however, upon seeing one of his close-ups, Hancock described himself as looking “like a fucking frog”. Consequently, close-ups were barely used throughout the series, but this was far from enough to prevent the terrible viewing figures awaiting Hancock’s.

For the first two episodes of Hancock’s, the theme tune features a brief, hummed version of the brass sting which opened Hancock’s Half Hour and, in a later episode, there’s a further call back when Hancock offers to perform a section from The Blood Donor for an American director. Although mildly amusing, they also act as a stark reminder of just how far Hancock’s star had fallen in the intervening years. Hancock’s never really gets going and, although it’s difficult to get a true handle on it due to the missing visuals, the soundtracks clearly demonstrate it was a misjudged idea. Unfortunately, for Hancock, it’s unlikely that even the best scripts on the planet could have saved him by this point. Instead, Hancock’s acts as little more than a sad farewell to his career on British TV.