The Manchester United team of the mid to late 1960s was a stupendous collection of talents, personalities and, most importantly, winners. Their highpoint, of course, came in 1968 when they Benfica to become the first English team to win the European Cup (Celtic had taken the accolade of first British club to win the competition the previous season). 10 years on from the Munich air disaster, it was the culmination of an unenviable rebuilding process helmed by Matt Busby which sought to yield the ultimate fruit. And yield it did.

With a rich vein of youth and experience running through the team, along with the otherworldly talent of George Best, the 1968 victory should have signalled the beginning of an imperial period, but it didn't quite work out. In fact, for the next 25 years - the odd domestic cup aside - there would be little to celebrate. In 1991, however, Alex Ferguson's Manchester United restored pride in English football's European endeavours by winning the Cup Winner's Cup after the five year ban on English clubs in Europe following the Heysel disaster was lifted.

And, two years later, the holy grail of a top flight title came as Giggs, Cantona, Hughes et al delivered a brand of football almost as thrilling as George Best's hair ruffling in the wind. Crucially, it meant they would be re-entering the Champion's League née European cup 25 years after their last appearance in the competition. It was the perfect time to look back and reminisce about the glory days of 1968, so the original team, along with Sir Matt Busby, soon found themselves Re-United.

Produced by Chrysalis, Re-United is a one off documentary looking back at Manchester United's European cup run in the 1967/68 season. Written by the legendary and long serving sports writer Patrick Collins, the documentary brings the pulse raising team of 1968 back together at Wembley to relive that crazy night. Starting the documentary on the rather spacious team coach - lent to them by the 1993 Manchester United team - the squad head to Wembley and reminisce about the games and events that led them to victory.

Being a huge Man Utd fan, I was cock a hoop to find this documentary tucked away on an old VHS tape which, coincidentally, I had collected from Manchester. As you can tell from the last few years of Curious British Telly, I thrive upon the history of subjects I love and Re-United had me salivating at the potential insights on offer. And then I discovered that the narration was being provided by none other than Ian McShane, a man who was not only Lovejoy, but also a massive Man Utd fan. 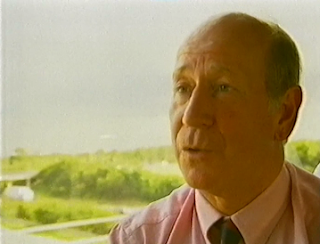 The story of the 1968 Manchester United team has been told countless times before, but, much like England's 1966 World Cup win, it's one of those stories which fails to loses any of its lustre no matter how many times you hear it. Sure, if you're completely blinded by the rather reductive tribalism of football, you may view 1968 story as unimportant, but if you've got an ounce of sense between your ears you'll nod sagely in approval at it.

Key to the whole story is Matt Busby, one of the connecting links - along with Bobby Charlton and Bill Foulkes - from Munich 1958 to Wembley 1968. Busby was 83 when Re-United was filmed, so his speaking role onscreen is limited to just a few words, but his presence is far from understated. The players clearly still adore him and talk passionately about how they were playing for Busby and wanted to win the cup for him. Sadly, little more than 6 months after Re-United aired, Busby had passed away. 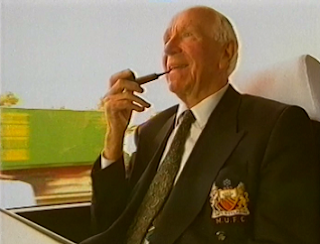 Re-United, then, gives Busby one last chance to reunite with his squad at the scene of their most famous triumph. And, with hindsight, one of the most poignant images in the documentary is of George Best and Busby walking off the Wembley pitch together deep in conversation like father and son. Best, one of the finest players in the world in '68, is on fine form with that trademark twinkle in his eye as he dismisses his tag as a wasted talent by putting forward the '68 win as proof that his promise was fulfilled. 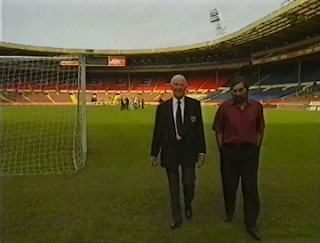 All the players insights, of course, add to the story with Bill Foulkes being a particularly strong storyteller when it comes to that magical cup run along with Bobby Charlton. There's a striking dichotomy between the black and white footage of these young, athletic men and the modern day footage of these middle aged men returning to their former stomping grounds. Naturally, we all grow old and it's a fate awaiting us all, but some of us - in particular footballers who were at the top of their game - come packed full of amazing stories. And that's exactly what Re-United delivers. 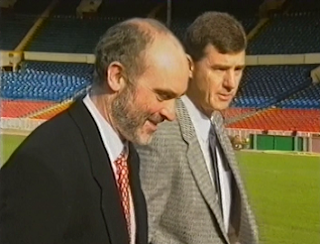 Alex Stepney recalls the moment he came face to face to with a fearsome shot from Eusebio, Pat Crerand describes the fearsome tackle which kept Mário Coluna quiet and everyone recalls just how important Busby's half time talk at the Bernabéu was in the semi-final. Denis Law, meanwhile, recalls being injured and missing the game, but celebrating with a crate of McEwans. Although not everyone in the team was a Mancunian, it's pleasing to hear just so many rich Manchester accents reminiscing, an indicator that, despite Manchester United's continued dedication to local youth, this is from a very different era of football. 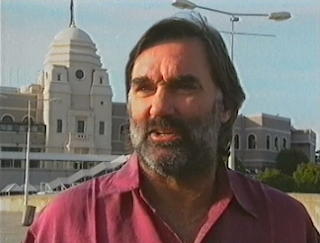 And it's a very different landscape in terms of TV documentaries. Whereas, today, you would have the much missed twin towers of Wembley reflecting off of Nobby Stiles glasses and closeups of George Best's youthful 1968 face slowly segueing into his rounded, more weathered cheekbones of 1993, Re-United is visually very basic. There's a nice section where the reunited team depart the team coach in the exact same order that Kenneth Wolstenholme's 1968 commentary introduced the team, but it wasn't really until the following year's An Impossible Job featuring Graham Taylor that British football documentaries started getting all Laurie Cunningham. Nonetheless, Re-United has enough on pitch flair to make up for shortcomings in production which, quite frankly, only become apparent in hindsight. 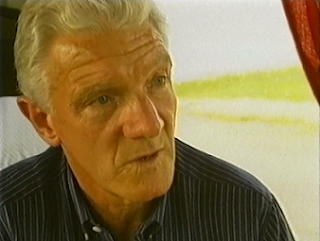 Following Manchester United's re-entry into Europe's top competition in the 1993 - 94 season, they've recaptured the Champion's League title twice more and provided plenty of thrills along the way. The original triumph, much like all narratives, remains the most complete and pleasing and, nearly half a century later, defines exactly what Manchester United is all about.

Posted by Telly Viewer at 12/24/2017
Email ThisBlogThis!Share to TwitterShare to FacebookShare to Pinterest