We're so busy rushing about that we're constantly looking ahead and worrying what's coming towards us. Sure, it's an invaluable skill to possess whilst driving and whilst trying to navigate your way through the Boxing Day sales, but there's a whole world beneath our feet and it's a shame that we miss out on the wonders below. And, if you were to cock your eye towards the grass and leaves, you might be lucky enough to glimpse some Windfalls.

"Wherever there are flowers and trees and grass there's always a Windfall Land. And in every Windfall Land you'll find Windfalls" narrator Peter Hawkins informs us as Windfalls starts, but what are Windfalls? Well, they're little characters made up from the leaves, petals and grasses that make up the natural landscape of Windfall Land. The main focus of Windfalls centres upon three of the Windfalls: Berry, Butterbur and Rosebay. 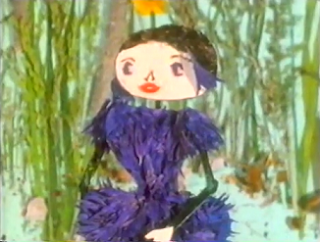 Together, these three characters interact with the many other inhabitants of Windfall Land such as Uncle Onion, Bella Donna, Cornflower and Evening Primrose to name but a few. You may be wondering what sort of adventures await such a curious collection of characters, but rest assured that the action won't find Uncle Onion being pursued by hipster foragers or Evening Primrose being hunted down for her previous Gamma Linolenic Acid (the chemical that can help with menopausal symptoms). 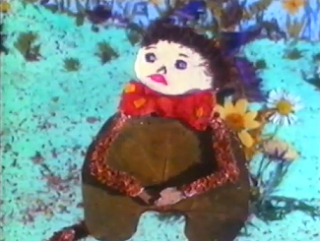 Instead, the world of nature will be explored with episodes finding our all-natural trio investigating how a rainbow forms, the dangers of mysterious berries from the woods and the importance of dock leaves when dealing with nettle stings. Each episode is comprised of two stories with a short interstitial sketch in between of a Pierrot clown larking about chucking bundles of flowers up onto his hat to balance or even creating a Windfall child from a bunch of flowers.

Created and written by actress, writer and traditional cooking expert Jenny Kenna, Windfalls consisted of 26 episodes (totalling 52 stories) and was produced by Central TV and FilmFair with episodes going out in the Friday 4.05pm slot on Children's ITV. Kenna reveals that the inspiration for Windfalls was one that was close to her heart and this passion helped her get the show onto our screens:

"My love of flowers and nature in general was my original inspiration.  I began to press flowers and leaves to create colourful collages of floral arrangements and one day by pure chance I formed a floral character. Before long I had a whole array of characters and knew they had to be part of a story and the natural story-lines could only be those linked to nature truths of which there were many.  Whilst writing these stories I met a TV producer who suggested the concept would make an interesting children’s television series.

I was introduced to Graham Clutterbuck of FilmFair and was told that if I could get my characters to walk across the screen they would consider making a pilot which would then be shown to Central TV in the hope that a series would be commissioned. Graham provided me with a small studio, a rostrum camera and a month to experiment.

Being totally non-technical I quickly had to learn the rudimentary skills of animation. It was very daunting but I was determined to get my little characters (which were only a few inches high) to walk. At the end of the month this was achieved albeit in very jerky fashion. Graham was delighted and soon an experienced animation team were brought together. The pilot was made and to my utter joy a series was commissioned"

Although a second series never followed - tragically, Graham Clutterbuck died before the end of the series - and repeats were not forthcoming, 18 of the 26 episodes were released over three VHS releases through the Little Croft Studios label. 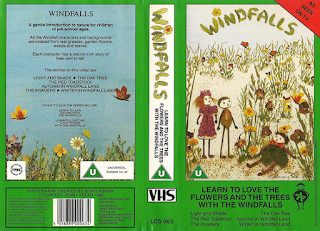 Windfalls Beneath my Feet

One of Curious British Telly's loyal friends recently tipped me off to the existence of Windfalls, but it wasn't a show that I could remember watching despite my early 80s birth placing me in the perfect position to watch it. Upon checking the TV schedules for 1989, it transpired that Caterpillar Trail was airing over on Children's BBC in the same timeslot as Windfalls, but again this was a show which I can't remember watching. So, what was I doing back then when Windfalls aired? Well, I've got no idea, but I was probably playing on my Amstrad CPC. 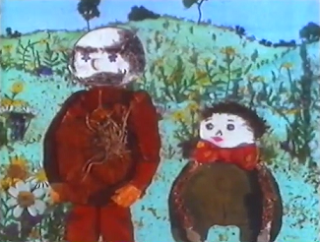 Regardless of what I was doing, I eventually caught up with Windfalls (several episodes are up on YouTube) a cool 28 years after it first aired, but would it be a case of better late than never?

What's most immediately striking about Windfalls is its unusual aesthetics courtesy of the natural materials used to shape Windfall Land and its many narratives. Looking quite unlike any of its contemporaries, Windfalls is heavily indebted to nature and, as a result, feels much more like a European folk tale produced on the continent rather than at home in Britain. 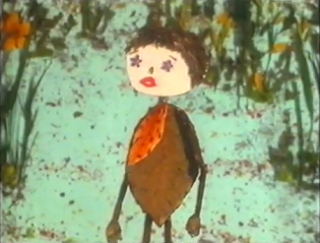 A unique look which taps perfectly into the ethos of the series, but working with those materials (all pressed and once organic matter) must surely have been a nightmare, right? Well, Jenny Kenna remembers it being testing, but more than achievable with the right amount of skill and care:

"The natural materials were obviously very fragile so delicate handling was essential.  Fortunately, my clever French animator Isobel Perrichon was very dexterous, she hardly ever mislaid or damaged a single fragment including the lips, as these were made from miniscule pieces of petals and the eyes in many cases were tiny forget-me-not flowers. Sometimes the grasses of the landscapes would curl up under the heat of the lights and occasionally a leaf would become discoloured, so replacements had to be found immediately.

All the work had to be done using watchmakers tweezers from assembling the characters and backgrounds to the actual animation itself.  Animation with real flowers, leaves and grasses had never been done before so it did take a bit of practice to get used to working with this medium but once achieved the job became easier"

And, of course, the whole production had the backing and talents of FilmFair to call upon, so it's no surprise that their inimitable magic managed to breathe so much charm into the series. Working with FilmFair and, in particular, Graham Clutterbuck was a fantastic experience for Kenna as she reveals:

"FilmFair would not have been FilmFair without Graham Clutterbuck. He had the gift of understanding children’s mentality and knowing instinctively what type of programmes they would love to watch.  It was a pleasure to go to work each day and to be surrounded by so many creative people.

The whole atmosphere at Jacob’s Well Mews was thrilling - perhaps Paddington Bear was being edited in one of the editing suites or the rushes of Portland Bill were being viewed in another. It was a hub of creativity and I felt very privileged to be part of it all and proud that I played a small part of the animation life at FilmFair" 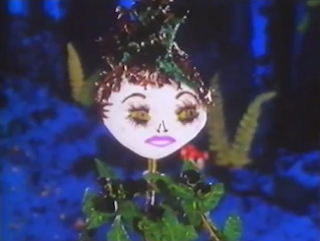 Berry, Butterbur and Rosebay are all very much on the same page as the young viewers at home as regards their knowledge of nature, so this provides Windfalls with a marvellous connection to the audience. After all, which kid doesn't like poking around at bushes, throwing petals up in the air and taking acorns home to proudly display on their shelf without actually knowing anything about these instruments of nature. Plenty of learning, therefore, goes on in Windfalls and, as children's TV should do, it provides important lessons through entertainment. And you can't hammer home the importance of not eating strange berries enough to small children who simply want to put everything in their mouths. 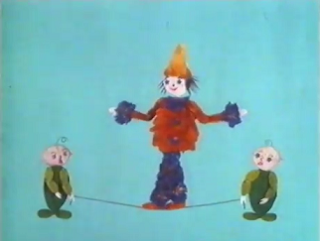 Windfall Land provides plenty of opportunity to learn about the wonders of nature be it about the nocturnal activities of Evening Primrose flowers or the nasty surprises lurking within stinging nettles. And it's such an idyllic little world - aside from the beautiful, yet sinister Bella Donna who lurks in Shady Wood alongside plenty of mysterious, creepy eyes in the dark - with its accordion led soundtrack that you can't help but be charmed and never look at flowers in the same way again. Jenny Kenna certainly doesn't, so I'll leave the closing comments to her:

"My love of nature continues and I’m pleased to say my book Crafty Leaves is a culmination of all the work that transpired from working with Windfalls and FilmFair (www.craftyleaves.co.uk)"
Posted by Telly Viewer at 11/12/2017
Email ThisBlogThis!Share to TwitterShare to FacebookShare to Pinterest