Quadruple Professor Adonis Cnut (Rik Mayall) is the resident genius at Oxford University with a penchant for moral philosophy and a self-proclaimed national treasure. And, as Britain's cleverest man, Cnut doesn't have the time for such piffling tasks as preparing supper, so, in his employment is the subservient and adoring Brian Albumen (Michael Maloney). 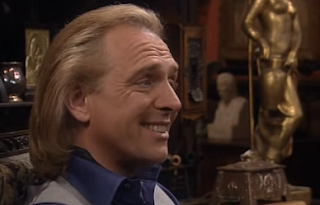 Whilst Cnut's incredible intellect may seem to dominate the machinations of his mind, it comes to him with such ridiculous ease that he's still got time to allocate energies towards the pursuit of the fairer sex. And, in particular, he's focused his attentions on the beautiful Dr. Hannah Awkward (Emily Bruni) who is a professor in pedantics; sadly, for Cnut, she's more in lust with correcting people than pulling down Cnut's trousers. 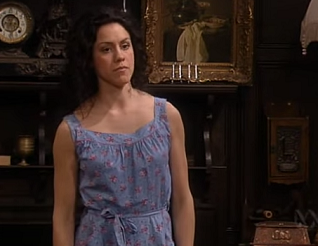 The first episode of Believe Nothing sees Cnut joining a shady cabal of world dignitaries known as The Council for International Progress. It's headed by an enigmatic chairman (Don Warrington) and counts Mao Tse Tung and Henry Kissenger amongst its elite.

And this secret council are keen to incorporate Cnut's genius to help them remain snug and secure in their control room from where they maintain a firm grip on mankind. With the help of Albumen and Dr. Awkward, Cnut is set a series of seemingly inexorable and dangerous tasks which he views as nice workouts for his grey matter. And it also opens up some opportunities to bed Dr. Awkward.

A Blueprint for Genius

Believe Nothing was a Maurice Gran and Laurence Marks project, so it's no surprise they drafted in Rik Mayall for the lead role. The trio had previously tasted phenomenal success with The New Statesman, so it was clearly a case of if it ain't broke, don't fix it. Directing the series was John Stroud who had previously worked on comedy shows such as Harry Enfield and Chums, Game On and KYTV.

Believe Nothing was ITV's latest attempt to reclaim the title of 'spiritual home for British sitcom' following the BBC's dominance over the previous 20 years. With The Office redefining the genre a year previously, ITV were in dire need of a hit and that's why they were keen to bring in a successful team of big names. 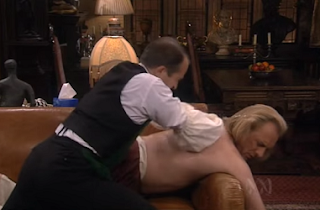 Unfortunately for ITV, they made the bizarrely inexplicable decision to deny Believe Nothing a primetime slot. Instead, they shunted it into the schedules at 10pm on a Sunday which is particularly unfriendly territory for a bright and bouncy sitcom.

Six episodes of Believe Nothing aired over the summer of 2002 and eventually found their way onto DVD.

Perhaps due to the fact that I was 19 during the summer of 2002, and far too busy getting drunk, Believe Nothing didn't even make the slightest dent on my consciousness at the time. And, believe me, I'm a huge Rik Mayall fan, so quite how it eluded even the drunken fog of my formative years is a mystery.

Eventually, earlier this week in fact, I managed to catch up with Believe Nothing.

And Rik Mayall is as splendidly fantastic as ever. There's a rich, manic pedigree strutting through his veins and his heightened confidence coupled with an engaging bluster means he always fills the screen. In fact, his untimely departure from our mortal plain has left a gaping hole in the British TV landscape which we lament almost daily. 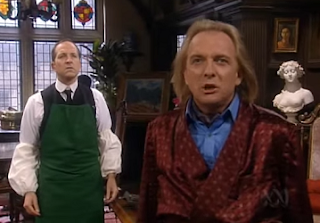 Cnut is arrogant, sure, but he's nowhere near as odious as Alan B'Stard and not a monumental tosser like Richard Richard. Like the latter two characters, though, despite all their flaws, you intrinsically want them to succeed and get their less than salubrious hands on all that glitters. It says a lot about us as a nation that we respect a dash of arrogance, but there's something which is so attractive about living through their devil may care morals.

Albumen could easily be written off as a cut price Baldrick and, yeah, he certainly has similarities such as a willingness to accept beatings, but Albumen is much less deadpan. There are also some intriguingly surreal flights of fancy within Albumen and his backstory, so he's just about original enough to pass muster.

Emily Bruni, of course, manages to conjure up a stately vision of pedantics and complete indifference to Cnut's advances, so she wrings out plenty of comedic worth in her performance. Sadly, Dr Awkward feels pushed to sidelines of the narrative, and this is a shame as the writers could have made more of a big deal about her. She's an arresting counter blow to Cnut's ego, so she's got the potential to be a much bigger part of the plots. 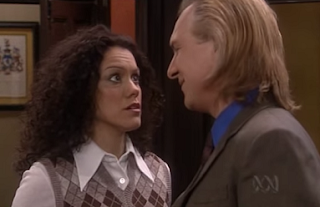 One of the the main thrusting points of Believe Nothing is that there's a satire present about the way our day to day lives are ran and manipulated by unseen forces. It turns the focus on conspiracy theories of shady forces, but unfortunately it never quite captures the zeitgeist in the way The New Statesman did. Whereas that found itself camping in Downing Street, Believe Nothing is merely skimming through an X-Files DVD.

Nonetheless, the plots of Believe Nothing still work without a strong concept acting as a foundation. Clearly written for the frantic, shouting exuberance of Rik Mayall, the episodes zip by energetically and are plotted out with an elan which belies the presence of some skilled veterans formulating the scripts. 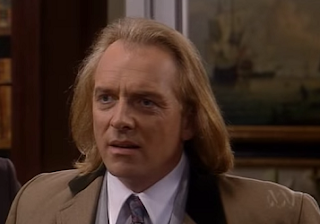 And Gran and Marks also deliver on the gag count too with the episodes of Believe Nothing being garnished with a fine collection of hilarious one liners and exquisite visual gags. With such gifted comic actors on hand, it's no surprise to discover yourself laughing out loud and applauding the style in which the narrative unfolds.

Believe Nothing captures everything that's necessary in a good old fashioned sitcom and, as expected when so many great names come together, it makes for a stunning spectacle. But, unfortunately, it appears that events and trends were conspiring against it.

There was a mixed reaction from critics at the time; Bruce Dessau loved it whereas Charlie Catchpole of The Daily Express turned his nose up at what he considered to be a waste of Rik Mayall's inherent comic genius. And the scheduling didn't help either.

Airing at 10pm on a Sunday, you're never going to be guaranteed a huge audience. And why such a late time slot? Sure, there's a few risque entendres and a smattering of violence, but it's hardly Bottom. There's also the small matter of The Office momentarily turning people against the traditional sitcom format. 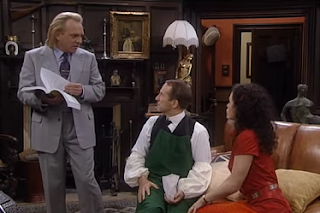 All of a sudden there was an interest (primarily led by critics) for an exploration of a more naturalistic take on the sitcom genre. It was certainly a genre which needed new life breathing into it, but not moribund enough to be the fall guy.

Nearly 15 years on, though, it's clear to see that there's room for sitcoms such as Peep Show and Miranda to jostle for our funny bones, so it's easier to appraise Believe Nothing purely on its merits. And, yes, there's genius at play in Believe Nothing.

In fact, as Believe Nothing collides with Rik Mayall, we're left with genius squared.
Posted by Telly Viewer at 4/23/2016
Email ThisBlogThis!Share to TwitterShare to FacebookShare to Pinterest