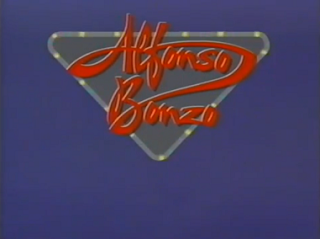 When you're a kid, mastering the art of swapping is pretty essential. After all, there's always something your mate's got that you want and vice versa. Cold hard cash, of course, is a commodity so scarce to kids that it's not even worth saving up. And waiting for Christmas or your birthday takes absolute aeons when you're a little squirt, so yeah, swapping, what a great way to get what you want!

Actually, you know what? Eradicating all currency and purely relying on swaps wouldn't half be a good system to consider for the entire world. Ownership is purely transient, so why should we bother fumbling around with coins and notes when, instead, we could reduce the clutter of possessions that, the pursuit of which, causes us untold and biologically unnatural stress?

And money don't even exist anyway! It's purely a series of numbers floating around in the cloud (probably, everything's up there now except God and his unfashionable peace and morality), so let's consign it to the trashcan because quite frankly we've all had enough of bankers running round with their trousers down and their shirts off whilst glugging jeroboams of champagne.

So, to sum up, in just a few paragraphs we've managed to solve all the financial stresses and injustices that riddle society. The future of market trading lies in swapping and we're all gonna live happily ever after like in that John Lennon song 'Imagine'. Oh wait, hang on, we'd only gone and forgotten about bloody Alfonso Bonzo! Now there's a cautionary tale on the dangers of swaps if ever we heard one, so let's take a quick ganders at it!

Billy Webb (Scott Riley), now there's a veteran and somewhat master of the old swap scene. With an almost magisterial touch, young Billy is able to negotiate amazing swaps on all types of crazy items with the residents of Splott Street and his mucky fingered school mates at Splott Junior and Infant School. 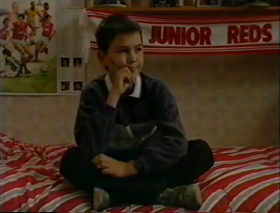 Billy's swaps make him popular with his peers, but his propensity for swapping anything in pursuit of that killer deal drives his Mum (Susan Porrett) and Dad (Brian Hall) bleeding nuts. However, if the thought of Billy swapping his jumper for some dusty old Elvis LPs irritates them, then they need to strap themselves in as Alfonso Bonzo (Alex Jennings) is moseying on into town. 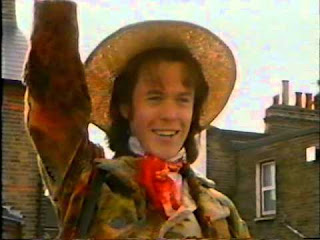 Alfonso Bonzo is a curiously enigmatic Italian chap who dresses flamboyantly and whose arrival is always heralded by a jaunty whistling that not even a particularly jocular milkman could match. But what is he? Well, he's an Italian exchange student, but this ain't none of that coming over here to learn about our culture lark. No, he's simply come to perform incredible swaps with the esteemed swapper, Billy Webb. 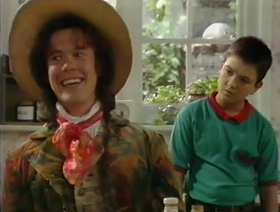 Want a magical bag? Alfonso's got one! Want a talking dog? Alfonso's got one! Want a job? Get down the job centre, son! These swaps are, naturally, amazing, but due to their otherworldly nature, they're completely unpredictable and land Billy in a right load of bother that he struggles to wriggle out of. And as the intensity of these swaps increases, Billy begins to wonder exactly what Alfonso's long term motives are.

The whole story is told in flashback by Billy who is now holed up in hospital with a broken leg (how the devil did he acquire that?) and is regaling journalist Trevor Trotman (Mike Walling), who also has a broken leg, about his encounters with Alfonso. 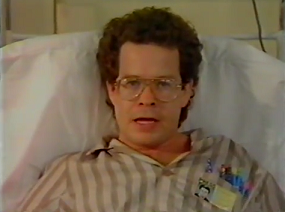 Back in those of halcyon days of 1986 not only did we have the release of The Queen is Dead and the sublime genius of Maradona at the Mexico World Cup, but we also saw the release of the children's book Alfonso Bonzo by Andrew Davies!

Davies, of course, is best known for his TV adaptations of Pride and Prejudice and Vanity Fair, but he was also the master behind one of the most underrated sitcoms ever, Game On. Anyway, Davies saw something in Alfonso Bonzo, so decided to adapt it for the small screen. 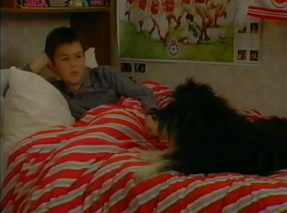 Alfonso Bonzo first aired in January 1990 on BBC1 in the 4.30pm slot in the CBBC schedule and ran for 6 episodes. The series received just one repeat, about 18 months later on BBC1 again. Billy Webb, however, went on to have further adventures in Billy Webb's Amazing Stories, but this was sans Alfonso.

The whole series has recently gone up on YouTube, but it's also available on DVD from various rare DVD sites.

What's in a Swap?

"Alfonso Bonzo? What's that?!" we demanded to know when one of our mates mentioned it to us several months ago. It was, apparently, some kids show that we really should have watched back in the early 90s. Well, sorry, son, but we can't remember that one. Must have passed us by like the concept of sobriety.

We had a quick look on YouTube, but at the time there was only one episode up. And when it comes to a series with a narrative, that ain't much use to our old tellywaves blog. However, time is relative and feasts upon destiny, so it was only a matter of time before some erstwhile TV fanatic uploaded the entire series to YouTube.

With Alfonso Bonzo at our fingertips it was time to hit the play button. 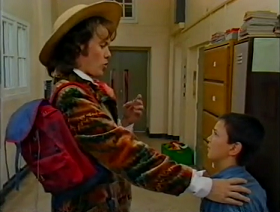 First off, Billy Webb frequently refers to Alfonso as a "mad Italian hippy", but we feel this is a little harsh. He's too dapper to be a hippy. In fact, if you can imagine a late 1980s Italian take on Doctor Who then that's exactly what Alfonso is. There's a whiff of the Milanese catwalks about Alfonso's attire and, blimey, Alex Jennings only goes and manages to add even more class to the character!

Alex Jennings, right, has won three Olivier Awards and, based purely on his Alfonso Bonzo showing, he's deserved every single one. He's simply amazing in the role of Alfonso and manages to exude charisma at every turn. With that amazing smile delivering a genuinely rich Italian accent it's no wonder that Billy's mum and sister go all giddy over him. 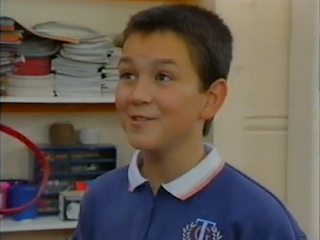 But don't forget little Billy Webb because Scott Riley's a likable little oik with a seemingly never ending pallet of incredulous faces to portray disbelief about the utter carnage going on around him. Riley didn't go on to have a career in acting which is a shame as he's a promising young actor compared to the vast swathes of wooden child acting surrounding him in the industry.

The rest of the characters are very much bit players in the story between Billy and Alfonso, but it doesn't mean their acting should go unheralded. Brian Hall, as ever, brings that likable Cockney air to Billy's dad which we'll never tire of and Bryan Pringle as headmaster Mr Hardwood delivers his trademark dour and gloomy disposition. 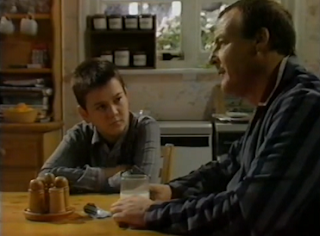 And what about the story? Well, it's one of those wonderfully quirky 4.30pm shows that the BBC used to deliver in spades. Andrew Davies has managed to craft a lighthearted series with plenty of knockabout fun and an incredibly creative sense of adventure which transports the viewer out of normality and into some wonderfully surreal universe. However, in the final episode there's a sudden shift towards pathos as we see the true nature of Alfonso's motives revealed and it pierces through the laughter with a tragic yearning for happiness.

The one thing we weren't completely enamoured with is the whole flashback story telling. Don't get us wrong, Mike Walling is a fantastic comedy actor and he's bubbling away with a comedic vim and vigour which perfectly complements Andrew Davies' dialogue. However, the narrative is pretty straightforward, so interspersing it with a bit of chat about how they were born, how they lived and how they died malarkey feels a little redundant. A minor quibble, but we like to point out these flaws as otherwise the illusion of perfection is all too obvious!

Would We Swap This?

Alfonso Bonzo teaches some important lessons to the kids. Namely that you should be happy with what you've got and the grass isn't always greener on the other side. It's easy to become greedy when something shiny's dangled in front of your eyes, but a sense of realism needs to be adhered to otherwise things can go tits up. And family, after all, is something you can never afford to lose.

It's a fine lesson for young minds to be tutored in and, Christ, if we'd have watched it at the time we may not have ended up in the disastrous Monster in My Pocket swap in 1992. It still haunts us to this day the way we lost our Behemoth *shudders*

And this message is detonated in our minds by the glorious explosives that are Andrew Davies sparkling script and a whole range of impressive performances which prevent boredom seeping into our ticking little minds.

So, swapping isn't necessarily the answer to the world's endless troubles caused by financial lust and gain. But what is the answer to this? How are we going to build a utopian society where we're freed from the shackles of possessions and the hardships they create from their initial production up to the greedy desire for owning them if even just fleetingly? Sadly we're too far gone and removed from our cave dwelling simplistic past, so to hell with it! Just lose yourself in Alfonso Bonzo and learn what you can about the true definition of security and happiness.
Posted by Telly Viewer at 11/21/2015
Email ThisBlogThis!Share to TwitterShare to FacebookShare to Pinterest