Alan Heap and Mick Wall have only gone and found themselves running Dizzy Heights Hotel down by the seaside, haven't they! 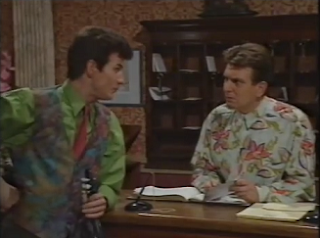 And it's not too shabby looking either. Flock wallpaper decorates the lobby and a huge, luxurious curved staircase - flanked by enveloping curtains and pillars - tempts you upstairs to a set of rooms which look pretty cushty and would certainly not dissuade us from staying there with a young lady.

However, look a little closer at the hotel and you'll see that things aren't exactly perfect. Take them old luxurious, opulent stairs, for example, they've got a couple of mice - Morty and Myrtle - living in them! 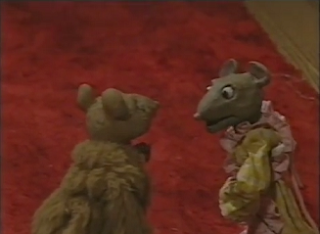 And what about the very lifeblood of that there hotel, the guests? Well, with it a being a transient kind of place there's all sorts passing through from opera singers to reporters to a damn duke. They're all charged, of course, with bringing some discordant dynamic to - what we in the trade refer to as - the plot.

But it's not just waifs and strays who wander through the doors to cause havoc and bring the world of tourism crashing down on Mr Heap and Mr Wall. Nah, there's also a bunch of resident guests going under the name of The Gristle's. 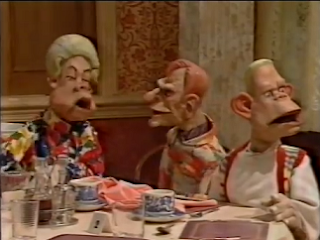 A bizarre collection of exaggerated jawlines and cheekbones, The Gristle family are a positively vile (yet bizarrely innocent when their natural grotesqueness is taken into account) bunch of gluttonous latex horrors comprising of Victor, Vera and their relatively upbeat (considering his parents) son, Eustace.

Oh and, we almost forgot, there's them two terrors of taxidermy, Bear and Hog. They're a couple of stuffed heads (of a bear and a hog, obv) who occasionally dispense witticisms on the hoopla taking place. 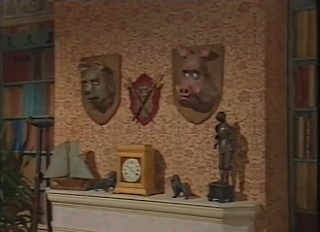 Together, this bunch of miscreants' hopes, needs and fears are all gonna come head to head in a cataclysm of larks, madness and Corby trouser presses. And not one Spanish waiter in sight.

How to Run a Hotel

Dizzy Heights started its life off as a tiny little seed up in the cogs and wheels of author Jonathan Meres' curious mind. He had plans for a book about life in a hotel, but it never came to fruition. However, fast forward a year or two and writer Robin Kingsland was scribbling himself into a fury with the scripts for the BBC.

The puppets were manhandled and manipulated by the trio of Richard Robinson, William Todd Jones and Marie Phillips. Richard Robinson - also the man beneath The Riddlers and Sebastian the Incredible Drawing Dog - also contributed additional material to the series. 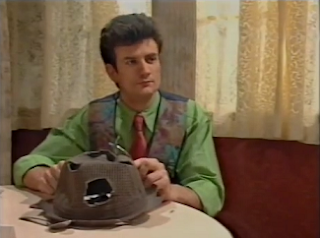 The series had a decent innings and racked up 28 episodes over the course of four series between 1990 - 93 on BBC1. The BBC were so enamoured with the show that they deigned to grant a couple of spin offs for the Gristle family - 1994's The House of Gristle and 1995's The Curious Case of Dr Hertz Van Rental.

A couple of changes occurred during the Dizzy Heights run, mostly concerning the hotel's layout (it's radically different in earlier series') and the theme tune which appears to have lyrics for at least one of the series', but is then an instrumental version for the others.

Sadly, Dizzy Heights hasn't been beamed out of our beloved cathode ray tubes (or LCD pixels to the kids) since 1994. There were no VHS releases and only one episode and a smattering of clips clog up YouTube's bandwidth.

How Was Your Stay?

Tell you what, mate, we loved laying our delicate little peepers on Dizzy Heights when we was all of 4ft and a bit high (probably in the low 5ft's when it finished). We loved so much comedy when we were young, but we perhaps didn't always get all the idiosyncrasies and subtleties of adult shows like Only Fools and Horses and Minder.

That's why we always welcomed a kids comedy where we could laugh out loud and know exactly what we were laughing at. 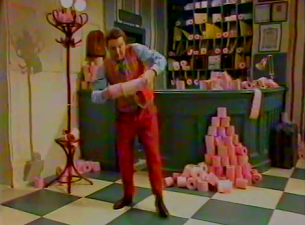 And Dizzy Heights fulfilled both those needs admirably and with some flair. Quite why we've only just got our backsides in gear to take a look at it is - and this is no exaggeration - like some lost Greek tragedy by one of them statues in the British Museum.

But we're here now and there's an episode on YouTube so let's take a scalpel to the epidermis of Dizzy Heights and perform a retro tv autopsy. 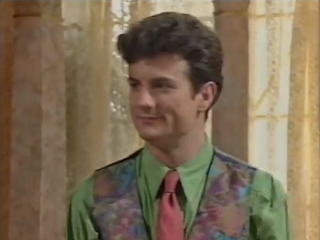 Like any good double act, Heap and Wall have differing personalities to create all sorts of tension for our viewing pleasures. Heap, of course, with his Teddy Boy quiff and John Virgo-esque waistcoats is the more scheming and devious of the two - a bit like Paul Chuckle - whilst Wall, with equally garish taste in shirts and floppy hair is the more doe-eyed of the two, funnily enough, a bit like Barry Chuckle. 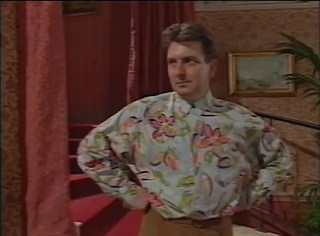 And what of the Gristles? Well they was always one of our most favourite bits because, you know, it was like that big, bad Spitting Image, but didn't involve having to sneakily stay up late and watch it through the crack of the door as our Dad laughed at satirical nonsense we didn't understand.

Yeah, them puppets was funny looking and we loved them even though they were a bunch of sorts. And it's only now that we realise what an amazing sense of racial harmony that Dizzy Heights promoted. So what if their skin wasn't made of flesh, the fact that it was latex needed never to be mentioned. What a right load of humanitarians, eh? 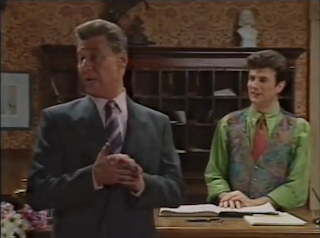 We'd forgotten all about Myrtle and Morty, but they're cute little critters and their own little subplots are nicely entwined to the main plot to keep the havoc factor ticking along nicely. They almost get murdered at one point, though, and it's this sort of harsh reality we love to see be hoisted on kids. And it's only attempted murder which ain't never hurt no one. Well, maybe a little, but never to a point where the Grim Reaper gets on his broomstick. Or scythe. Or whatever.

The gags, well they're a little corny. But they're corny in a way which is completely new to kids e.g. Heap ends up literally eating his hat after saying "I'll eat my hat if...". It's a bit cliche to our cynical, world weary eyes, but to a kid it's all "HE IS LITERALLY DOING WHAT HE SAID HE WOULD EVEN THOUGH IT'S COMPLETELY INSANE!". 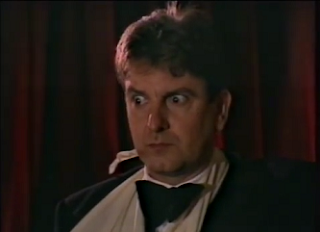 The performances and way the series is structured, though, is top rate. Heap and Wall have that natural chemistry which drives on all the great double acts and allows for some on the nose dialogue and quick fire banter. All the puppeteers know their onions and it's a delight to see the whole team interacting.

In fact, there's a section in the episode on YouTube - A Star is Bored - where all the characters have this operatic sing off. We couldn't believe quite how fantastic it was and we very soon had a smile on our face stretching from one lughole to the other. It was so well written and performed - all them lot could right proper sing, you know. 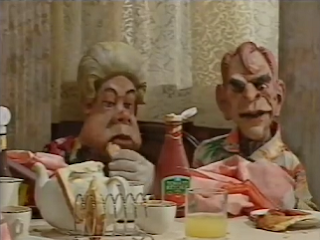 And with 3 or 4 plots usually lurking beneath each episode there's barely time for your mind to wander. Instead you're focused on the escalating madness as Dizzy Heights cooks up farce that wouldn't seem out of place in a Torquay hotel.

Talking of which, don't that hotel reception desk and office look suspiciously like the one Basil Fawlty used to hide behind in them 1970s?

GIVE US A DVD!

This show's very special and we're going to fight for a DVD release with more ferocity than TripAdvisor bludgeons us with emails begging us to review hotels we're never gonna stay in.

With four series you would think Dizzy Heights would be well remembered, but we ain't met too many folk who can pluck it from the cavernous recesses of their crazy minds. Compared to something like Maid Marion and Her Merry Men it hasn't entered into the public's hearts as a mythical beast of classic children's TV.

And yeah, it doesn't quite scale the - wait for it - DIZZY HEIGHTS of Maid Marion, but it's damn close and deserves a little more recognition being bestowed upon it.

Anyway, until the day that hell freezes over and a DVD of Dizzy Heights comes out, we'd recommend you get your keisters over to YouTube pronto to catch a glimpse of this farcical gem.
Posted by Telly Viewer at 6/13/2015
Email ThisBlogThis!Share to TwitterShare to FacebookShare to Pinterest