The fairground is one of those magical landscapes that a child's brain can barely comprehend the majesty of.

With the bright lights, the booming music, the thrills and, of course, the sweets, the fair is custom built to appeal to every sensory desire of a child.

A parent, meanwhile, looks at the pools of vomit, holds onto their wallet tightly and prays to God that their child doesn't fall in with 'the fair lads'.

However, even the most pessimistic adult, can't deny that the fair acts as an escapist fantasy even if it's just for the briefest of moments on the waltzers before they vomit up their £4 hotdog.

And in Dodgem we find a father and child retreating into this fantasy world to escape the rigours of life.


All the Fun of the Fair

Simon Leighton (Sean Maguire) has got himself into a right old two and eight. He's stuck in a foster home with fellow children who are driving him insane and he just wants to get back to his artist dad Alex Leighton (John Telfer).

But how did poor old Simon find himself down the swanny like this?

Well, things haven't been that chipper at home recently. His mother Linda Leighton (Erin Geraghty) was - whilst pursuing her ballroom dancing dreams - tragically run down by Alex. Now, Alex was incredibly frustrated and jealous of Linda's ballroom dancing dream, but it was nothing more than an accident. 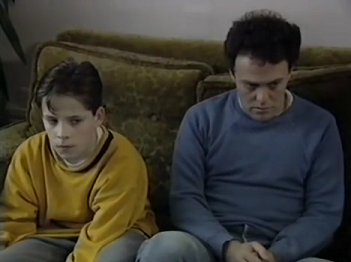 Alex, though, is ravaged by anguish and finds himself retreating deeper and deeper into the recesses of his mind to try and make sense of it all.

And you know what? He's in no fit state to look after Simon anymore.

So, Alex gets shipped off to a mental health assessment unit whilst Simon gets plonked in a foster home along with Rose Penfold (Lucy Speed). Rose has found herself separated from her 'Tunnel of Love' fairground ride owning dad Charlie Penfold (Trevor Peacock) due to poor school attendance. 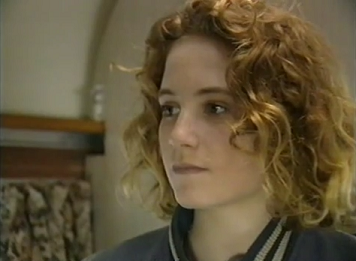 Simon and Rose couldn't give two tosses about social services, so they formulate a devious plan to escape the foster home and reunite with their parents. 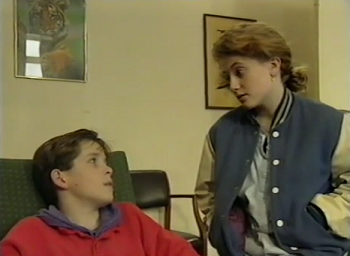 And the alluring lights of the fairground promise to be their saviour.

Dodgem was an adaptation of the Bernard Ashley 1981 novel of the same name and the series aired in early 1991 as part of the CBBC schedule. 6 episodes went out on Wednesday afternoons in the 5.10pm slot.

Christine Secombe was the producer and had a healthy CV packed full of previous experience in childrens TV with credits for Tom's Midnight Garden, Jonny Briggs and Jackanory. The writing credits were attributed to Bernard Ashley.

You Have to Be This Tall to Ride This Ride

We completely missed Dodgem the first two times, but when we heard Bernard Ashley was involved we couldn't hold back from this helping of retro TV. Bernard, of course, was the man behind Running Scared which has proved to be one of the most popular shows we've written about. 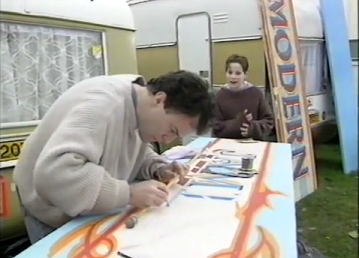 And luckily, at the point we discovered Dodgem, someone started uploading episodes to YouTube weekly. It was almost like going back in time and looking forward to each week's installment. Proper retro viewing.

Anyway, we duly devoured the 6 episodes and, well, we found it to be a mixed bag of retro TV.

First, the acting from Sean Maguire and Lucy Speed is excellent. Maguire is suitably frustrated with his situation and the way he lashes out at the word is well measured and his determination is full of emotion. Speed is confident beyond her tender years and her manipulative powers present an intriguing history. 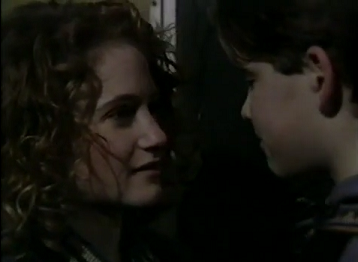 And the mood of the piece is quite astounding for a piece of childrens tv. Death, separation, mental health, bullying and love are all packed tightly into the shows DNA. Each aspect cleverly taps into the fears of any child and allows them to relate to the character's personal tragedies.

The use of a fairground is also an inspired choice which represents an escape for all the characters where they can start again. Every child feels like running away at some point in their life, so again, it's something the young viewers can engage with and Bernard Ashley deserves credit for this simple, but effective device. 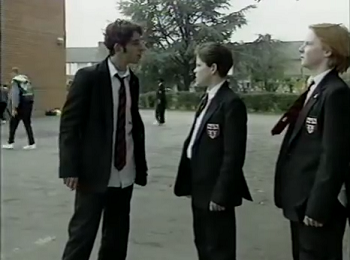 However, there are a few minuses as well.

Sometimes the mood is just too heavy for a childrens show and moves into depressing territory. Sure, there's light at the end of the tunnel, but the journey there is a hard trodden path which is a bit of a struggle for the viewer.

This isn't helped by the length of the series either. 4 or 5 episodes would have made for a more lively piece whereas, at 6 episodes, it does seem to drag at times - particularly life in the foster home with its collection of cartoon bullies. 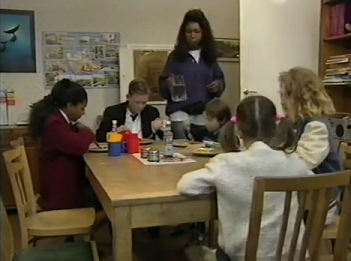 And some of the acting is a little poor. John Telfer's range for portraying a depressed father is limited and it seems more a case of barely acting rather than sinking his teeth into the deep psychological issues Alex is going through.

The storyline is also a little muddied. There are no real antagonists apart from life itself. The occasional foe turns up for Simon, but they're small time and play no real part in how the story unfolds. Mental health is the biggest bad guy on offer, but maybe it's too complex for children to truly grasp.

The message sent out by actually escaping and joining the fair seemed a little strange in our opinion. There are no real ramifications for their actions which come across as desperate and immature. In a way, though, it does highlight that adults can make mistakes. 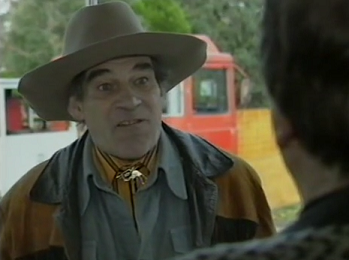 The resolution to the show is a bit baffling as everything is tied up just a little too neatly. Given how the characters have behaved they all seem to be getting off scot free. A happy ending is certainly needed after all the emotional hardship they've gone through, but we were left wanting something a little more believable.

Dodgem is a decent-ish show, but it's heavy going for a piece of childrens TV which could badly do with a little more joy along the way to lighten the load.

It's boosted by the great performances of Sean Maguire and Lucy Speed who would both end up in EastEnders in a few years time, but, despite continuing to act on TV, for one reason or another they've never quite set the world alight.

Dodgem is certainly worthy of a watch in the name of retro TV, but it doesn't rank as highly in the annals of classic TV in the same manner that Running Scared does.
Posted by Telly Viewer at 4/30/2015
Email ThisBlogThis!Share to TwitterShare to FacebookShare to Pinterest