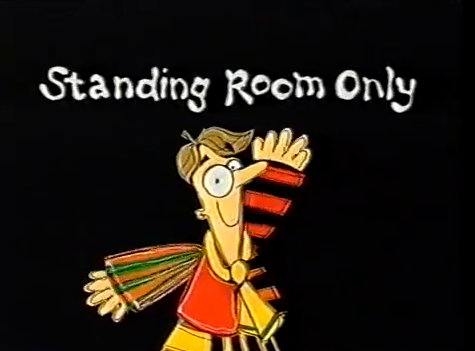 A dark, grieving shadow had enveloped British football, so was it any surprise that attendances were dwindling and fans were hated?. British football dragged itself into the 1990s facing an uncertain future, but a revitalising change was hovering on the horizon.

The landscape was changing and we hadn't even encountered the Premier League or Euro '96 yet. Football was interesting again and this new attitude was captured by Standing Room Only. 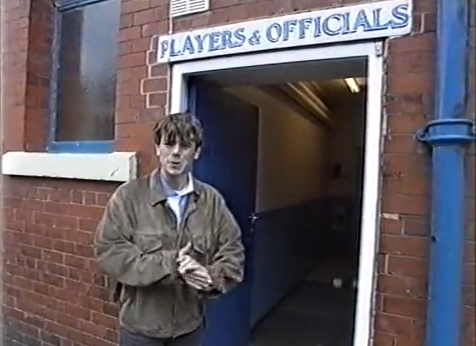 However, instead of analysing turgid matches with well worn cliches or asking footballers what their favourite music was, Standing Room Only took their cue from die hard fanzines such as When Saturday Comes. Instead of pandering to the wild xenophobia of cartoon football fans, Standing Room Only strived to portray the modern football fan of wanting much more than just an expletive ridden chant.

Serious subjects such as the rise of facism in the newly reunited East and West Germany were certainly never covered by Saint and Greavsie. Did Jimmy Hill ever present a feature on the rising number of female fans? Perhaps he wanted to, but the majority of mainstream football shows were interested in nothing more than analysis and old boys humour.

Standing Room Only, however, wasn't afraid to tackle these curious subjects and put them under the spotlight. The show, though, wasn't purely a po-faced highbrow dissection of football.

There was still a laddish spring its step and this was epitomised by the rich vein of humour running throughout. Notably, David Baddiel and Rob Newman contributed sketches to the Sepp Maier's Comedy Shorts section to give the show a nice combination of funny and smarts. The satirical swipes, a mainstay of fanzines, was also present in the form of Guardian cartoonist Steve Bell's hard hitting animations. 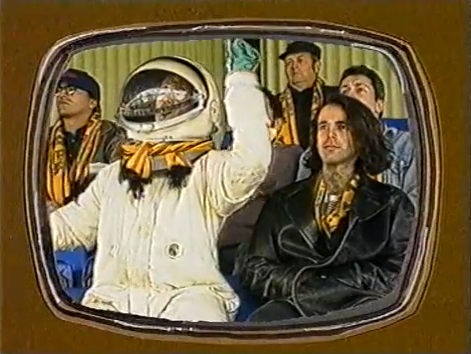 Broadcast as part of BBC2's Def II strand Standing Room Only was produced by the BBC's Youth and Entertainment Features department which was headed up by the honking estuary tones of Janet Street Porter.

Between 1991 - 94 around 40 episodes were filmed including specials on the 1994 World Cup and the show's award ceremony - the Platinum Parrots. The series has never been repeated, but clips from the series were featured in the 1995 BBC2 series Natural Born Footballers. 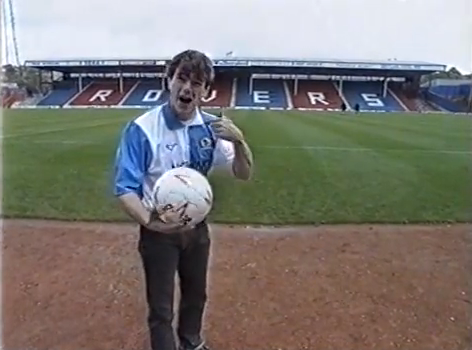 Standing Room Only coincided nicely with our entry into the world of being a football fan and wanting to know a little bit more about this seemingly simple game. Usually warmed up by an episode of The Fresh Prince of Bel Air we were captivated by the depth of this fascinating world sport.

And who were all these past stars they interviewed? Michel Platini? Never heard of him, mate, but we'll listen anyway as he looked good in his prime.

The humour was sublime and one sketch which always sticks in our memory featured a wild Liverpool fan stuck in a timewarp of past successes being restrained by a photo of great player, but terrible 90s manager Graeme Souness.

Unfortunately, we found it impossible to find anything online about the show. However, this was purely down to us thinking the show was called Sick as a Parrot - which, it turns out, was a curious children's crossword puzzle show.

Once we had the correct name firmly ensconced in our memory it was time to investigate. Only a few clips exist online, so we headed straight for the BFI who hold copies of the entire series. Donning our scarf and football rattle we sat down to watch the very first episode.

The first thing that struck us was the depth of intelligence at play. Aimed at the teen market, it was remarkably clever and not like any other contemporary football TV shows. It's fair to say that the show appealed to much more than a teenage demographic as, even now, we couldn't help soaking it all up.

Simon O'Brien is indicative of the new face of the terraces. He's got the hair and look of your typical scally, but there's a deep love and respect for the game at his heart. And not a Stanley knife in sight.

Sure, you could mistake him for someone in an indie band, but the connection between football and music in the 90s got bigger and bigger as the decade went on. Oasis loved Manchester City, Damon Albarn was always seen at Stamford Bridge and who remembers that little ditty Three Lions?

Giving fans the chance to voice their views is a great feature and one that - radio aside - had been sadly lacking on TV. It was further evidence of the desire to unleash the passion previously limited to the confines of fanzines and the terraces. And the Fan Stand and Supporterloo sections kept that DIY ethos of fanzines alive and well.

The humour, although 20 years old, still holds relevance as it battles the establishment and sums up the highs and lows of being a fan. Quirky little features such as 'Screen Gems' which showed clips of footballers trying, but failing are also timeless in their hilariousness.


Standing Room Only was an amazingly cool show which mixed the laddish love of football with a deep and insightful analysis of the romance behind being a football fan. Football's a funny old game, but the cultural impact it's had on the planet can't be underestimated and contains such depth that a thoughtful analysis is always appreciated.

Three series is a great run for any TV show, but why did it stop just as football was starting to explode into the billion dollar industry it now is? It's a real shame as there hasn't been anything like it since. Fantasy Football League was a similarly magnificicent show, but that was purely rooted in the realms of comedy.

We've had enough of Sky's Monday Night Football and Match of the Day. We want something that's going to make us think and look at the bigger issues in football rather than Goal of the Month.

Someone commission it now!

And please get in touch if you have any recordings of the series!
Posted by Telly Viewer at 1/24/2015
Email ThisBlogThis!Share to TwitterShare to FacebookShare to Pinterest