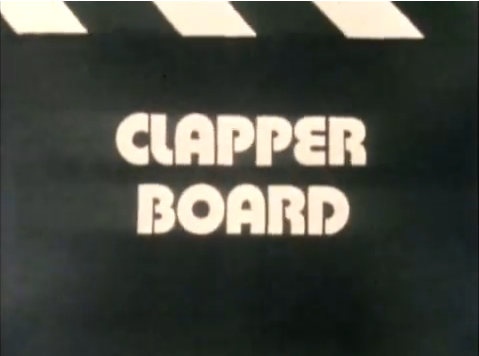 LIGHTS! CAMERA! ACTION! IT'S THE MOVIES!

Don't worry, we're not betraying our name and straying into ill-advised movie commentary. We would never do that to you, but we're well within our rights to examine TV shows about cinema. And here to help us it the rather highbrow children's show, Clapperboard. 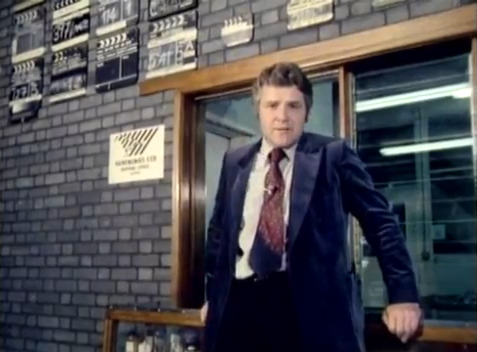 Clapperboard was an arts documentary series fronted by Chris Kelly. The series aimed to provide a true education in cinema. Episodes would see Chris Kelly investigating subjects such as the history of musicals, the goings on of EMI's carpentry shop and a look at the life and times of playwright/actor Robert Morley. Some subjects were explored over the course of one episode whereas some could spread over three. Of course, Clapperboard didn't entirely ignore contemporary film and there were often episodes dedicated to examining what was currently on at the multiplex.

Clapperboard first aired on Friday 14th April 1972 at 16.15 on ITV and was a Granada production. The first episode featured Chris Kelly and his guest, Leslie Halliwell (buyer of films for ITV), looking at "illusion in cinema". Depending on the series, episodes on various days of the week and always in the post 4pm slot. Occasionally, episodes were also aired as part of weekend morning TV shows such as LWTs Saturday Scene. The series was produced by Muriel Young who also, occasionally, stood in for Chris Kelly. In total, 254 episodes were produced over its 10 year history.

We were rather intrigued by the concept of Clapperboard. There was little information online about it, so we weren't really what to expect. Was it going to be an embarrassingly 'groovy' look at films or something more sedate? Luckily, two episodes are up on YouTube and, in particular, they look at  'Samuelsons' - a film facilities company based in Cricklewood. We couldn't resist, so grabbed a bag of popcorn and got streaming.

The show opens with a wah wah heavy theme tune accompanied by an animation featuring clapping hands, a camera and a clapperboard. It all felt rather "far out" and we pondered the tank top horrors that could be lurking within. And then something unexpected happened. Chris Kelly's professional and well spoken tone kicked in as he informed us we would be visiting Samuelsons. Before we knew it, we were in the office of one of the Samuelson executives detailing his rise in the production industry. What the hell was going on here? We thought this was a children's show and not the bloody South Bank Show. We checked our sources and, lo and behold, it was definitely a show for children - not people with beards and a penchant for naturism.

Clapperboard refuses to dumb down to its audience and, instead, respects their intelligence. For this it must be applauded. It really does feel like a show for adults, but for 10 years it ran as a children's show. This longevity can only confirm that children loved it and wanted to know about the inner workings of the silver screen. Episodes cover a lot of ground and progress at a good pace, but some of the interviews did feel rather dull and, as a result, can drag.

The depth of cinema that Clapperboard brought to the attention of children is quite staggering. A quick flick through the episodes throw up features on the early history of films in the North West, interviews with Ealing Studios directors and even discussing the Rising Damp film with Leonard Rossiter. It's a breathtaking sweep across the film world. We do wonder, however, just how many children enjoyed the episode at EMIs carpentry shop. Maybe it was the best ever episode, sadly we will have to assume it was rather plane (sic). You know, like a carpenter's plane. PUN.

Chris Kelly deserves a special mention as he's the very epitome of an arts presenter. A well dressed gent, he wouldn't look out of place at a film festival or examining brushstrokes in the Louvre. He presented the majority of the 254 episodes, so this highlights his dedication in educating the youth that there's more to life than Disney.

Curious British Telly were thoroughly impressed with Clapperboard. It feels so different to any other children's shows we've watched. The Pig Attraction was an arts based documentary, but nowhere near as mature as Clapperboard. It's indicative of the older audience children's TV used to attract. You certainly wouldn't see something like this on in the afternoon now.

We can't help but think, though, that a lot of children would have been put off by the adult tone. Many probably switched off and played football (or Pong) instead. Viewing it as an adult - with an interest in film - means that we invariably love it. A ten year run indicates it had an impressive fan base, so perhaps we're assuming too much about past generations. Anyway, we'll certainly be seeking out other episodes and suggest you do the same.
Posted by Telly Viewer at 1/08/2014
Email ThisBlogThis!Share to TwitterShare to FacebookShare to Pinterest