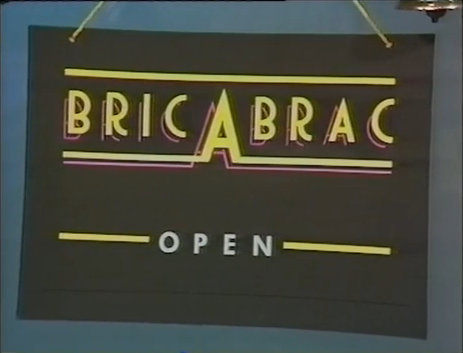 Bric-a-brac shops always held a certain allure for us as a child. First off, there was the alliteration of the name which rather tickled our speech receptors. Secondly, there was the strange clutter to sort through whilst we rummaged for Dr Who Target novelisations. Finally, there was also a small chance that we might bump into Brian Cant, the godfather of children's television and Bric-a-Brac. 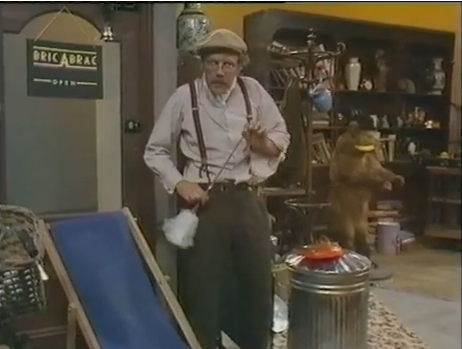 Each episode sees a particular letter (and it's sound) becoming the focal point e.g. the first episode concentrates on the letter B (buh). Cant's role is to forage the store for items beginning with that sound.

The items are often piled high into bizarre combinations such as a bear wearing a bowler hat with bananas in its mouth as a bucket stands by with a brolly in it.

Cant's search usually unearths some ancient windup toys which whirr across the screen as the end credits roll. 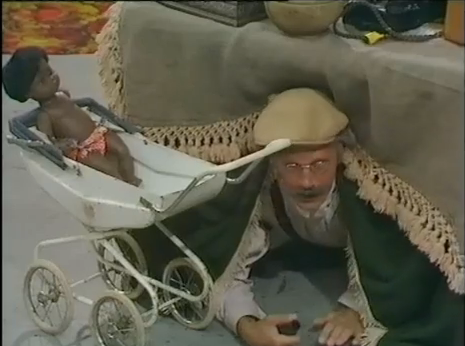 13 episodes of Bric-a-Brac were produced over two series in the early 1980s. Michael Cole - with his Midas touch for children's TV - and Nick Wilson created and produced the show. Also acting as producer was Cynthia Felgate who worked on numerous children's shows during the 1970s and 80s such as Play School, Play Away, Stilgoe's On and Willo the Wisp.

The first series of Bric-a-Brac aired in 1980 and the second followed in 1982, both part of the much feted 'SeeSaw' roster. Episodes were repeated several times through the 1980s.

The set design differed slightly between the first two series; series one featured an open plan set whilst series two had a much more authentic enclosed set, complete with detailed exterior features.

Bric-a-Brac was a show that Curious British Telly were very familiar with. It whiled away many of the lazy afternoons of our youth. We'd mess about at the local playgroup in the morning with our mates, head home for lunch and then settle down to watch telly with our mother.

Bric-a-Brac was one of the shows, from that time, which remained embedded in our memory banks. We couldn't remember too much, mostly that there was an old man in a bric-a-brac shop. Being prime blog material, we began to investigate.

A series one episode - the letter D (duh) - is up on YouTube*, but we demanded more material and headed to the BFI archive to view the first and last episodes (buh and luh respectively). 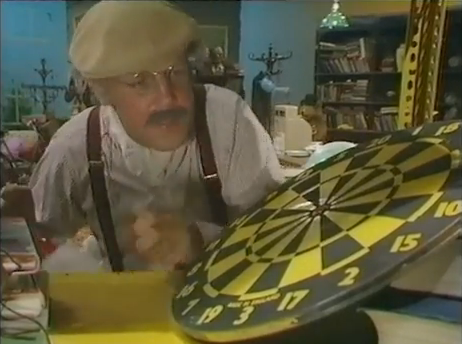 It's pointless eulogising about Brian Cant's position as children's TV legend, it's all been said a million times before. As regards Bric-a-Brac, he's integral to it's success.

We've bemoaned one man shows on here several times as the lack of rapport for a solo performer treads a dull path. Cant however manages to bounce off the viewers at home, the objects in the shop and his own absentmindedness.

It never feels sluggish and Cant is constantly on the move trying to amaze the viewer with the contents of the shop.

The phonetics theme is put across simply, but it's a format which allows viewers to get involved and scream at the telly. It's educational, but the peculiar objects of the shop mean that the attention is held.

This is in stark contrast to the similarly monikered Choc-a-Block (from the same team) which featured rather mundane objects.

Bric-a-Brac probably didn't provide the most complete phonics lesson - only 13 episodes aired and some letters were repeated - but at least it got children thinking about the words gurgling out of their mouths. 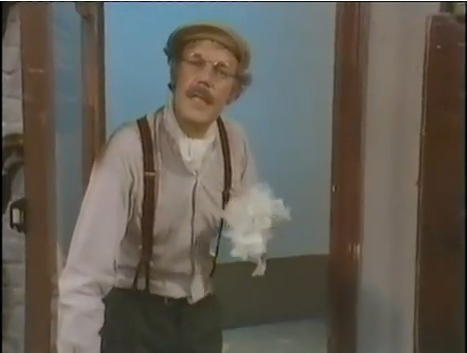 We were thrilled to revisit another little pocket of youthful memories in Bric-a-Brac.

It's a charming show helmed by the grandfatherly figure of Brian Cant. Encapsulating a gentle world where nothing bad happens and a Werther's Original is never more than a few feet away, we can't help but love it.

It's a shame that more episodes aren't 'out there' for the public; we suspect many more children of the 80s would relish the chance to rewatch it. Hopefully something will surface in the near future.

***The episode up on YouTube has mysteriously disappeared, so no footage is currently online***
Posted by Telly Viewer at 1/27/2014
Email ThisBlogThis!Share to TwitterShare to FacebookShare to Pinterest