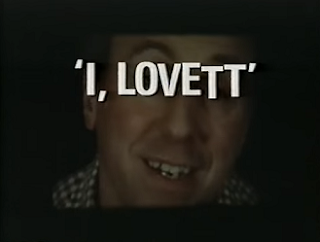 It’s thanks to inventors and their unique innovations that we live such a blessed life in the 21st century. Take the light bulb, for example, just how amazing is that? And it's all thanks to one man: Thomas Edison. In fact, there's an almost endless list of inventors such as John Logie Baird, Alexander Graham Bell and Nikola Tesla who have all made an indelible impact on society. However, just how many people have heard of inventor extraordinare Norman Lovett? That’s right, hardly anyone, but if you want to know a little more, maybe you should look at I, Lovett.

Norman Lovett (playing himself) is an amiable eccentric living in a small, terraced house and passing his time by creating inventions which include a strap on ‘cup of tea’ hat (to prevent heat loss from the head), miracle hair restorer and heated toilet paper. While these antics hint at Norman’s eccentricities, it’s only when you meet Norman’s longstanding associates that you get a true flavour of his peculiar universe. 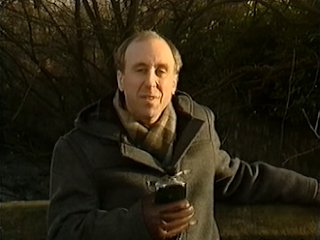 Living with Norman is Dirk (Geoffrey Hughes), a shaggy mongrel with a penchant for licking his testicles and making sardonic digs at Norman’s cheerful optimism. He may appear to be confident, but he’s all bark and no bite (unless, of course, he grows to 400 times his normal size). Dirk may have the run of Norman’s house, but it’s Horse (Leon Sinden) who has the run of the walls. Horse, you see, is a portrait of a horse blessed with a sense of sophistication and uses this to project an air of mocking despair towards Norman. 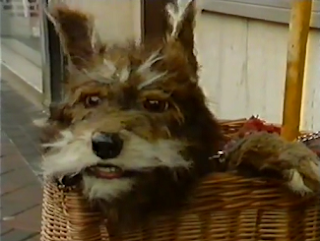 Next door to Norman lives Darren (Dicken Ashworth). At times, Darren can be rather pally with Norman and invite him to parties, but at other times he can act as Norman’s arch nemesis. And this rivalry is never more evident than when it comes to the annual marrow growing competition.  Away from his relationship with Norman, Darren drives a Ford once owned by Marlon Brando and enjoys nothing more than receiving a good spanking from his wife Una (Sara Corper). 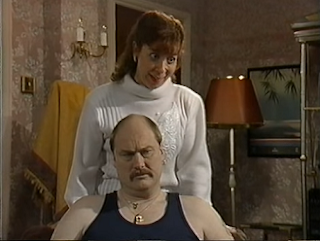 The adventures that Norman finds himself undertaking are just as unconventional as his peers are. For example, when Norman tries to reconcile with his dying father, he, instead, finds himself tracking down a snowman he had built decades earlier. There are also the trials of competing with a childhood rival who invented everything with a hole in it (mints and donuts), which results in Norman dressing up like a bird and attempting to fly. And Norman also ends up with a legion of bald men (including Duncan Goodhew) worshipping at his feet thanks to his hair restorer.

Starting off as a 1989 pilot episode within the Comic Asides series (which also included a KYTV pilot), I, Lovett eventually morphed into a standalone six episode series which received a single airing on BBC2 in 1993. I, Lovett was produced by BBC Scotland and written by Norman Lovett and Ian Pattison (Rab C. Nesbitt, Naked Video and Atletico Partick). The filming – which all took place in Glasgow – was directed by Ron Bain.

To find out a little bit more about the mechanics behind the series, I decided to get in touch with Norman Lovett and find out what he could remember:

“I wanted to create something that was a bit different from the normal sitcoms; I always liked the idea of a dog that could speak. I gave Ian a page or two of what could happen for each episode and he got on with completing each script. We sat and discussed things for a couple of hours each week. Ian reckoned we'd do at least three series which was encouraging, but this never happened"

The pilot episode was written purely by Lovett, but Ian Pattison was drafted in onto writing duties for the full series:

“I had been working freelance for BBC Scotland’s Comedy Unit. In 1989 I was offered a full time job as a script editor. A pilot had been made of Norman’s show some time before I joined. The pilot had been, I believe, transmitted but for some reason the progress of the show seemed to have stalled at that point. I think there was a view, shared by Norman that he needed a bit of help with writing any series that might materialise. I was asked, after Norman gave his approval, if I would help him write the series. I said yes, and off we went”

And it was with the addition of Pattison and the efforts of producer Colin Gilbert that work could begin on getting the series to air as Pattison recalls:

“Norman had meetings with Colin Gilbert, head of the Comedy Unit and others, including myself, at which attempts were made to learn lessons from the pilot and to firm up the Norman character’s environment, outlook, occupation, friends and acquaintances in order to present ‘I, Lovett’ as a fully formed comedic world before attempting to climb the BBC TV Centre budget mountain. BBC Scotland was, obviously, highly important in the development process as, after all, they made the pilot and continued beavering away – albeit intermittently – trying to extract a budget from TV Centre that would enable them to make the series”

The average man on the street will recognise Norman Lovett as Holly from Red Dwarf, but the true comedy aficionado (therefore anyone reading this book) will also know that Lovett is a legend of the standup circuit. And that’s why the prospect of a fully-fledged sitcom by the great man is difficult to resist. However, when you couple Lovett’s talent with that of Ian Pattison, it becomes rather obvious that I, Lovett is a crucial watch. 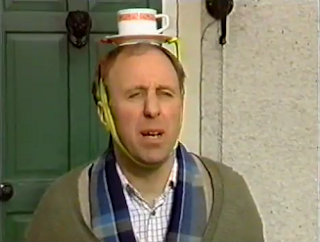 What with Lovett being an inventor, there’s an initial risk that the plots of I, Lovett could easily buckle under the immense strain of wacky inventions. However, Pattison and Lovett are clever enough to never focus the narrative squarely on the situation. Instead, in that time honoured tradition of sitcoms which know what they’re doing, they concentrate on the character. And that’s why Norman’s attempts to fly mask his desire for vengeance while his hair restorer tonic examines male pride in all its many forms.

These plots are blessed with a playful warmth that is both surreal and, more importantly, funny. Although not quite Dali-esque, the series dreams up a fun, offbeat landscape where Norman can find himself in deep discussion with a talking dog and a well-spoken portrait of a horse – no one else ever witnesses these usually mute entities talking, so perhaps they’re merely manifestations of Norman’s eccentricities. Either way, they’re ridiculously funny. 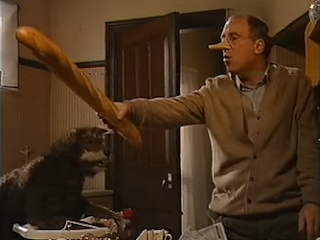 But it’s not just the animals of I, Lovett which provide the laughs. The opening episode is gloriously unhinged with Norman discovering a snowman from his youth sheltering (and dying) in a freezer in his parent’s attic. Sure, the haggard, wheezing form of the snowman is a little terrifying, but Norman’s offer to take him to Alaska and the discovery of a lettuce leaf that Norman assumes the snowman was saving for a special occasion is hilarious. Oh, and the snowman is voiced by Bernard Cribbins which makes everything a little more special. 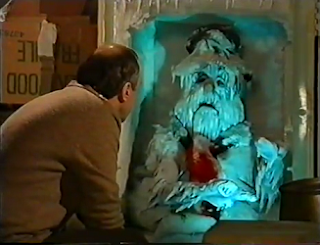 The spirited air of I, Lovett also allows plenty of storytelling techniques to be brought to the table which both ratchet up the bizarre atmosphere. Imaginary sequences where Norman is roughed up and kidnapped by a gang of bluebottles add another layer of nightmarish humor while flashback sequences explore how a schoolboy Norman lost out on inventing the hula hoop. Okay, many other sitcoms may employ these techniques, but I, Lovett seems keen on stretching them to Dadaist extremes. 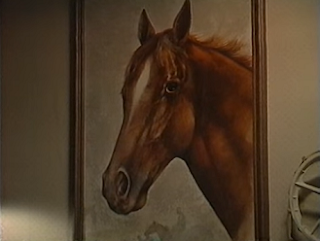 Rivalry, of course, is always an important factor in sitcom and I, Lovett serves up plenty between Norman and his curious neighbour Darren. Although grounded in a reality which is slightly more conventional than Norman, Darren can still be found pushing round his prize marrow in a pram or becoming enraged when his “very fine blonde hair” is ‘mistaken’ for baldness. Occasionally, Norman and Darren appear to be on good terms, but on the whole there’s a pleasing tête à tête between the two that form the most enjoyable narratives. 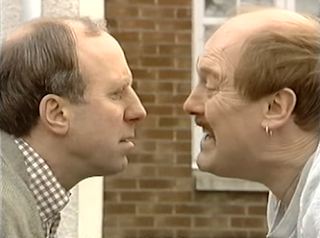 Clearly, then, there’s an unusual, yet highly engaging vein of comedy running through I, Lovett. And it’s a brand of off-kilter comedy that Pattison was keen to capture from start to finish:

“We shared a taste for slightly off- beat comedy. I think – and I may be misremembering – that we had a couple of reverential chats about ‘The Strange World of Gurney Slade’ which had aired in the 1950’s. I recall we wanted some Eric Satie as our signature music but that was probably bombed out on twin grounds of cost and accessibility. So we ended up with something cheap and cheerful in order to send a jolly signal to the viewer”

Naturally, the script would completely fail to materialise into something funny without a fine set of performances bringing the universe to life. Lovett’s quaint mannerisms jostle pleasingly with Geoffrey Hughes’ trademark rough around the edges everyman (Steve Coogan also auditioned for the role of Dirk) while Dicken Ashworth’s gleeful bravado and rage completes the inimitable atmosphere. And that’s before you even consider all the special appearances by stars such as Bernard Cribbins, Jean Alexander and, yes, even Magnus Magnusson. A special ensemble indeed.

I, Lovett contains everything that makes a great British sitcom: it’s offbeat, it views everything from particularly obtuse angles and, of course, there’s Lovett’s deadpan brilliance to hold it all together. It may have only flourished for a single series and, even then, it was relatively under the radar, but I, Lovett is surely up there with the light bulb for an invention which improves your life no end.
Posted by Telly Viewer at 6/04/2018
Email ThisBlogThis!Share to TwitterShare to FacebookShare to Pinterest