Doris is a black and white cat who, much like any other cat, can't speak the old human language, so can only communicate through meows. Luckily, for Doris, the necessity of a human voice is inessential in the feline world and certainly doesn't hold her back when it comes to living an anthropomorphised bipedal life. And, coupled with her Converse wearing, ginger tom boyfriend Marlon, Doris is going to find herself getting into all manner of scrapes with nary a ball of twine in sight. 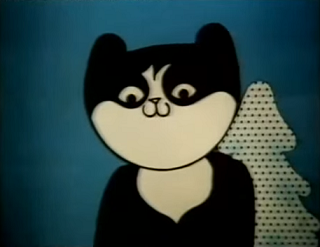 Rather than stealing strings of sausages, Doris will... Oh wait, that's dogs. Well, the point's the same, there won't be cliche cat adventures such as seeking out a welcoming lap to snooze in or planning to raid a bin in search of fish heads. Instead, Doris will be pushing the boundaries of catlife by undertaking trips to the moon to tackle industrious, but foolish mice, floating through the night sky in a giant spoon (I'm not even lying) and trying to improve the romantic prospects for a lonely snowman.

Devised and directed by Hilary Hayton - the creator of Crystal Tipps and Alistair - 40 episodes of Doris aired over the course of two series in 1983 and 1985. Produced by Yorkshire Television (although the second series also credits Hayton Associates), episodes of Doris were five minutes long and aired daily as part of the Children's ITV schedule in the 4.20pm slot. The series was based on a series of books written by Hayton which had been published by Piccolo in 1982.

The first series of Doris featured animation by Peter Lang (who had created Pigeon Street with Alan Rogers), but Lang had departed by the second series and was replaced by Martin Wansborough who has since contributed his animation skills to a number of Hollywood films. Providing the soundtrack for Doris was the esteemed composer Derek Wadsworth whilst keyboardist Dave Lawson conjured up the electronic bleeps that act as Doris and her pal's meows.

Although born during the requisite period to have caught the second series and be capable of storing memories for use in a blog over 30 years later, I cannot remember watching one second of Doris. And I even owned a cat at the time, so you would have thought that watching Doris would have been a crucial part of my television viewing habits, but no - maybe my brother was watching Spiderman over on BBC1? It was only a week or so ago that I actually heard of the series after someone on my Facebook group alerted me to it. 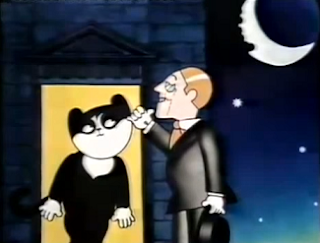 Several episodes of the series are currently sitting pretty on YouTube (seemingly from foreign broadcasts given the translated episode titles) but part of the beauty of Doris is that it doesn't rely on language at all. And not only does this make it perfect for selling abroad, it also creates a wonderful slice of viewing for those with auditory impairments (much like ZZZap!) although less so for those who are visually impaired... 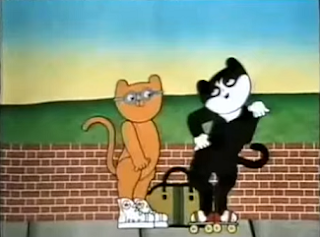 Anyway, I decided that Doris was worth a watch and headed straight for YouTube. Given the iconic status of Crystal Tipps and Alistair it's difficult not to compare the two series and there are certainly a number of similarities. Both are dialogue free and the visual aesthetics share a common gene, but Doris doesn't quite have the iconic sheen of style as Crystal Tipps and, as a result, the characters within Doris feel a little bit generic due to their simplicity - some of the backgrounds, though, are highly detailed pieces, but others - such as the adventures on the beach and the ski slopes - are sparse affairs indeed. 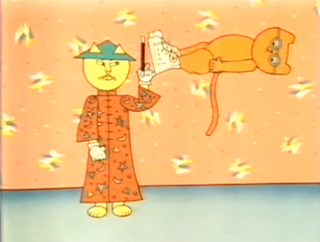 However, you can't judge a book by its cover and, in Doris, there's an intriguing set of narratives waiting to unfold. Whilst the lack of dialogue can make the plots a little confusing at times (are the mice chiselling into the moon for cheese? It certainly doesn't look like a cheese based moon! And why does Marlon head off on holiday without Doris?!) there's a pleasing dose of whimsy infusing the episodes such as the aforementioned 'giant flying spoon' episode which finds Doris floating through a starry, dreamlike landscape on a pink, fluffy cloud. Before being scooped up by said spoon. 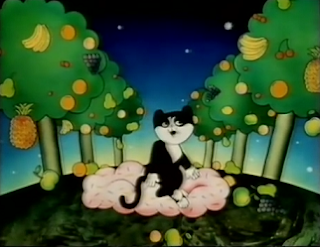 Combined with an ever-changing soundscape that can quickly switch from sublime, melodic hummery to synth based grandeur, Doris carves out a surreal and interesting spectacle which manages to condense a huge amount of plot progression into what's less than a 5 minute run time, kind of like a Tardis narrative if you can imagine such a thing. And this is why Doris, although not defining itself as a slab of legendary children's TV, certainly gives the boundaries of the genre a damn good stretching and resolutely refuses to outstay its welcome.

Posted by Telly Viewer at 9/16/2017
Email ThisBlogThis!Share to TwitterShare to FacebookShare to Pinterest