When I was a much younger man, I worked with a much older man who frequently imparted wisdom to me such as "If you're gonna cheat on your girlfriend, mate, do not, and I repeat, do NOT shit on your own doorstep" and "You ever go to India, mate, don't you trust their water out there, they're used to all the bacteria, but you're not, so just drink whisky all day to be safe".

Now, even at the tender, impressionable age of 18, I realised that what he was talking was utter rot and borne from a lifetime of dishonesty and poor medical knowledge - two traits I despise in people. As a result, I've never cheated (unless dancing rather closely during the conga counts) and I've certainly never been to India, but God knows I've eaten a few.

However, perhaps my experience, as a young adult, was just a blip on society's advancement to a more learned state of existence; maybe, it's possible to find yourself paired with someone who's seen it all before and can tutor you in the pitfalls of the world and the behaviour of others. And, just maybe, a perfect example could be found lurking within Sharon and Elsie.

Elsie Beecroft (Brigit Forsyth) is an administrator at James Blake & Son, a printer and manufacturer of greetings cards and calendars in Manchester. And, following the retirement of office secretary Eunice, Elsie is eager for a new secretary to be appointed. The first interviewee Sharon Wilkes (Janette Beverly) is late - her shaggy dog McQueen ran off with her shoes - but this is of little consequence as Maureen Hartley is due in for an interview and she sounds marvellous, she's also Elsie's husband's cousin's wife. 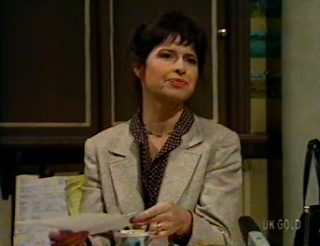 Maureen, however, gets offered a job elsewhere first and, the next applicant, Mrs Tibbett (Paula Tilbrook) is nothing short of a disaster, all scatterbrained and with curious aspirations of being a poet - an aspiration she's held for 40 years. Eventually, Sharon rushes through the door and despite Elsie's reluctance to grant Sharon an interview due to her tardiness, factory floor manager Stanley Crabtree (John Landry) manages to usher her into the interview, mostly due to his roving eye for anything in a skirt. Sharon's chances are further improved by the presence of her Uncle Tommy (John Junkin) as shop steward. 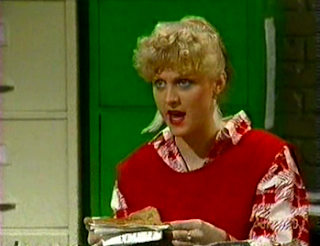 Sharon's interview is a success and given her fleet fingered typing skills she secures the job. Elsie is initially horrified, in part due to her middle class sensibilities being threatened by Sharon's cheery working class ebullience, but Elsie soon grows fond of Sharon and takes her under her wing. Together, they take on such plots as striking factory workers, the terrors of tea lady Ivy (Maggie Jones), the ups and downs of Sharon's relationship with boyfriend Wayne (John Wild) and even that sitcom favourite of Elsie's husband Roland (Bruce Montague) doing his damndest to throw a surprise party for their anniversary.

Sharon and Elsie was a BBC1 sitcom which consisted of 2x 6 episode series and aired on Friday evenings in 1984 and 1985. The series was written by Arline Whittaker who also wrote the 1987 BBC Radio 2 sitcom which starred Barbara Windsor and Peter Sallis. Each series was repeated several months after the initial airing, but no further repeats followed until UK Gold showed both series in the early 90s. The series was produced and directed by Roger Race who had previously overseen comedy productions such as Sykes, It's Marty Feldman, Broaden Your Mind and In Sickness and in Health.

I guess it's possible that I may have caught some of Sharon and Elsie when it originally aired in the 1980s, but the chances are slim as I was only 3 at the time of the final repeat. Frankly, during that era, unless a show featured a puppet then I wasn't really interested. Although I do remember a fondness for Only Fools and Horses which I mistakenly referred to as Del Boy.

Anyway, let's just assume that I didn't watch Sharon and Elsie and the arrival of this sitcom in my hands offered a new opportunity to indulge in some old comedy. Now, I'm a big fan of Whatever Happened to the Likely Lads so the chance to see Brigit Forsyth thrust to the front of her own sitcom was an intriguing proposition. And I couldn't forget Janette Beverley, I grew up watching her as Sister Diane Meadows in Children's Ward and always hoped she'd be the nurse prescribed to me if I ever ended up in hospital, but I was a remarkably healthy child and this never transpired.

So, a couple of stars who I had a lot of time for and it was a female led sitcom to help counter the dominance of male led sitcoms in the old hilarity stakes. 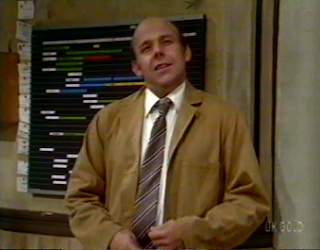 And, as predicted, Forsyth and Beverly are on fine form in Sharon and Elsie. Elsie's mature intelligence is captured perfectly by Forsyth and she uses this to keep a watchful eye over her young charge. And, with her mane of lustrous blonde hair, twinkling blue eyes and girl next door charm, Beverly brings a highly likeable air to Sharon, in fact, it's a surprise that Janette Beverley didn't go on to do more in the world of comedy.

There's an excellent chemistry between Sharon and Elsie, but unfortunately the writer doesn't make enough of this as it's crying out for a bit of conflict. The greatest sitcoms feature characters seemingly working together, but with hidden agendas all of their own; the greatest example of which is probably Albert and Harold in Steptoe and Son. Too often in Sharon and Elsie, the female leads are working in conjunction with each other against external parties and this leads to a drought in dynamics. 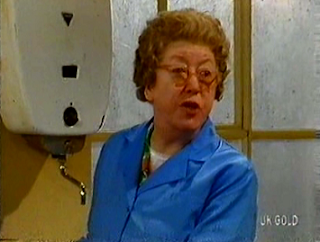 It's a serious malady for a sitcom to be struck with, but it's not helped by the supporting cast who bring very little to the narrative. Whilst Sharon and Elsie's co-workers are well acted - particularly Maggie Jones and her trademark acid tongue - they feel very underused and irrelevant; this leads to dialogue heavy two-handers between Sharon and Elsie which, although insightful and well written, struggle to generate any energy. And Mrs Tibbett's constant reappearances smack of barmyness for the sake of barmyness and led to me rolling my eyes whenever she shuffled on screen.

The laughter quota, also, struggles to come up trumps. Sure, I snorted out a few laughs here and there, but Sharon and Elsie is severely lacking in terms of stitch inducing laughter. Choice gags include such clunkers as a mispronounced discussion on metabolism resulting in "Metabolics? Is it like aerobics?" which made me pause the show and curse. Ivy, when discussing a Rastafarian remarks "Me cousin Muriel was a Rastafarian... Or was it a Rosicrucian?" and that's about as sophisticated as the comedy gets.

Sharon and Elsie is far from an offensively bad sitcom, but, instead, it's the extreme inoffensiveness and middling approach to narrative that makes it somewhat of a struggle.

The situation of the sitcom has a firm foundation with two generations of women coming together, but it fails to build on this as neither Sharon or Elsie ultimately learn much from each other and, in lieu of this approach, there's very little in the way of real conflict to create pure comedy. If you're a big British comedy fan then it's worth watching a few episodes, but any more than this and you'll struggle to stay on board.

And what happened to my old mentor who encouraged me to cheat and drink whisky? Well, he retired early with nearly a million in the bank and now spends part of the year living in Australia. Maybe there was something in his 'advice' after all...
Posted by Telly Viewer at 2/18/2017
Email ThisBlogThis!Share to TwitterShare to FacebookShare to Pinterest