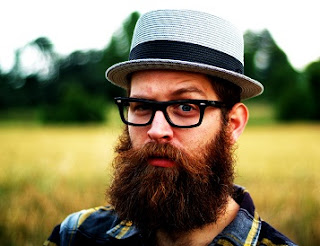 Over the last several years, British men have been experimenting more and more with facial hair. Just head down to any Wetherspoons on a Saturday night and you'll find all manner of beards, goatees and, whisper it, moustaches queuing up for a bottle of craft ale. Alternatively, head to Shoreditch for any given millisecond on any given day and you'll be swamped in facial fuzz quicker than you can say "flat white".

Recently, I've been wondering what exactly started this facial hair craze. Was it a brigade of illuminati hairdressers wanting to dictate facial hair fads to distract us from their inexorable rise to global domination? Or had the charitable intentions of Movember not only helped fight cancer, but also gone some way to repairing the tarnished reputation of moustaches?

Well, maybe, but what really caught my curious gaze was that many of these bearded men were of an age which belied the fact that they grew up in the 1980s.

And what did all children do in the 1980s? Sure, they demanded He Man figures and Manic Miner cassettes, but they also LOVED kids TV. And, guess what, British kids TV in the 80s contained more facial hair styles than you could shake a hipster at. Want some proof? Well, luckily, I've compiled 21 examples of irrefutable evidence below: 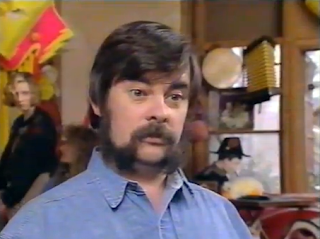 One of the earliest stars of Byker Grove, Geoff Keegan (Billy Fane) had a beard reminiscent of the styles last seen on wealthy Victorian factory owners. It was a beard which would later go on to keep a rambunctious Ant and Dec in line, but also make sure that a generation of Geordie tearaways stayed out of trouble. His beard would never have worked over at Denton Burn, but they were a bunch of oikish losers, so I doubt Geoff ever regretted not transferring his beard to the Burn. 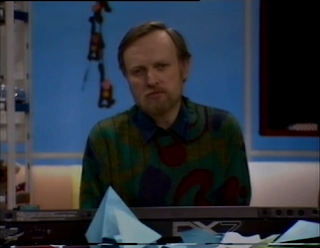 Admittedly, Richard Stilgoe's quite amazing 80s jumpers detracted from his simple beard arrangement, but it was a beard nonetheless. Although it has the whiff of an amateur magician to it, Stilgoe managed to avoid having to pull rabbits out of a hat to justify it. Instead, Stilgoes On allowed him the opportunity to showcase his 'friendly uncle' beard which contained a little knowledge on every subject under the sun had plenty of (purely non-magic) tricks up its sleeve to keep children occupied. 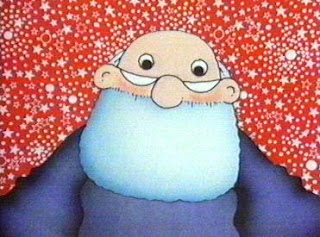 Mr Jupiter was an astronomer who had a passion for the heavens, but you could be easily mistaken in thinking that they also had a desire for his face. For, nestling on over half his face, there appeared to be a cumulonimbus cloud which had descended from the skies and decided to make Mr Jupiter's face its new residency. More importantly, Mr Jupiter's mammoth beard showed the world what a little bit of perseverance could achieve in the beard stakes. It doesn't really matter when he last shaved (I reckon it was 1954) as his beard was truly immense. 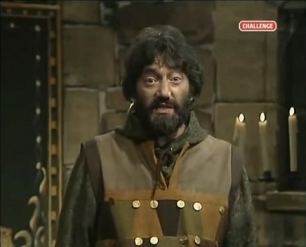 Dungeon master Treguard (Hugo Myatt) had plenty on his hands what with goblins running amok and children from Saffron Walden arguing about which spell to cast, but he still found time to nurture a thick, dark and rich beard. Frankly, if I were a marauding orc and I saw this fuzzy face coming towards me, I'd drop my broadsword and hop on the first dragon out of there. 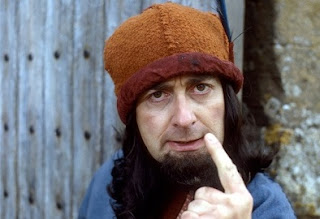 The Sheriff of Nottingham (Tony Robinson) possessed a Middle Ages 'chin-beard' of the highest order which imbued him with a devious and sinister edge. It did, of course, make him look faintly ridiculous, but what's facial hair without a little bit of comic value? 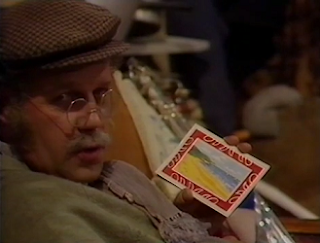 Has there ever been a moustache which said "Werther's Original" more than Brian Cant's avuncular effort in Bric-a-Brac? Sure, many people would point to their own grandfathers as a point in case, but they're wrong, oh so very wrong, as it was Cant's moustache which was the true embodiment of all that was good and kind in the world. 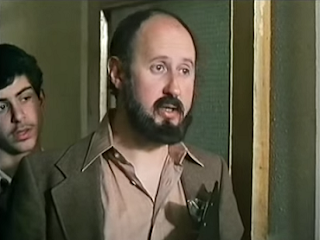 Mr 'Bullet' Baxter (Michael Cronin) was a formidable, but fair PE teacher who brought a no-nonsense approach to his lessons as well as a stunning beard. Okay, perhaps he was trying to compensate for his ever thinning hair up top, but it did a wonderful job of bringing balance to his face. And just look at the bad teenage moustache being sported over his shoulder. Truly this was an age to grow facial hair and revel in it. 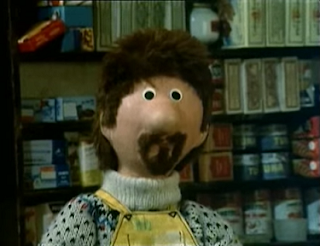 Blessed with a natural affinity for wearing seafaring garb, Scottish lighthouse hand Cromarty also understood the importance of a well trimmed goatee. Achieving the correct balance either side is a testing task, but when it's achieved with aplomb it can really set your mullet off to hitherto unthinkable levels of elegance and style. 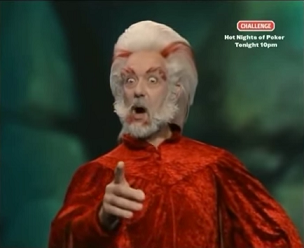 Even when he was having an off day, Hordriss (Clifford Norgate) never failed to be any less than a highly striking individual. Infused with eccentricity running through his every vein, Hordriss possessed an equally curious beard teased into highly stylised tufts. The final touch of genius were the red highlights which ensured he co-ordinated beautifully with his red robes. 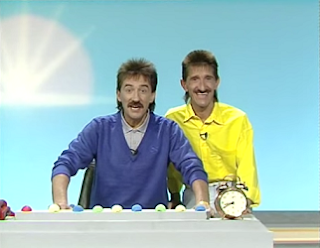 Not only would it be impossible to separate Barry and Paul Chuckle's moustaches into individual efforts, it would be highly cruel as the brothers are, essentially, a single entity. And whilst their moustaches were fairly simple affairs, it was this pragmatic approach to 'face tailoring' which defined being a Northerner in the 1980s. Iconic and unforgettable. 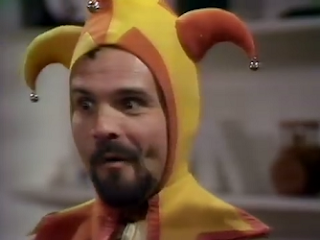 Timothy Claypole (Michael Staniforth) may have struggled to get to grips with the modern world, but one area of 20th century life that he was able to embrace was the need for good razor skills. The result was a suave goatee which demonstrated how, if you weren't prepared to go full beard, you could still have a hirsute face and look like a ruddy ladykiller. Please note that most women, however, are put off by belled hats. 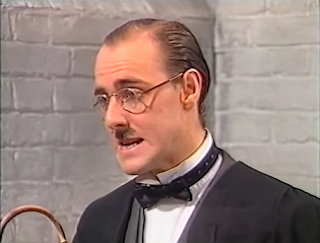 Braithwaite (Cal McCrystal) was the headmaster at Fulley Comprehensive and, in that time honoured tradition, he was truly a dictatorial menace. However, Braithwaite was unable to draw the line at being a complete and utter ghoul, he also had to go one step further and grow a Hitler moustache. Correctly termed a 'toothbrush' moustache, it highlights just how subversive facial hair can be due to the social and cultural history nestling in amongst the bristles. 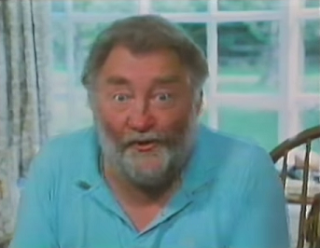 A highly passionate botanist, David Bellamy is also a great advocate of face foliage having been, almost probably, born with a fully fledged beard. Bellamy's Bugle allowed Bellamy to tutor British schoolchildren about the wonders of the world around them, but strangely he never devoted an episode to the wonders of a beard. Nonetheless, the presence, in every episode, of his own beard not only helped underline his barmy personality, but acted as an influential seed which would later germinate on many viewers' faces decades later. 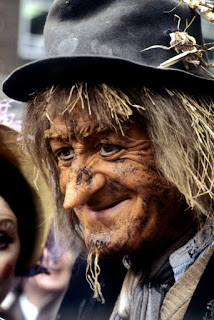 Some people simply aren't designed to grow beards, but, believe me, they'll still try their damndest to cultivate something on their delicate faces. And Worzel Gummidge (Jon Pertwee) acted as an inspiration for all these wispy haired goons with the fragile shootlings emanating from his chin. To be fair, poor old Worzel was always going to struggle what with his head consisting of either a turnip, manglewurzel or swede - vegetables historically known for their lack of facial hair. However, it's every man's (or vegetable's) right to attempt a beard, so, as long as you can take the accusations of being a "Bumfluff Mary", get growing! 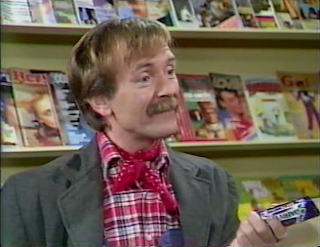 Forever clad in dungarees and a particularly fetching neckerchief, Inky (Gordon Griffin) was an industrious chap keen on printing comics about the world around us and, as per the picture, a huge fan of Cadbury's Dairy Milk. However, the most stand out feature of Inky was his dense, bushy moustache which was a marvel of facial hair and indicated qualities of strength and determination. If, at the time, he wasn't referred to as "Britain's answer to Magnum PI", then he most certainly should have been. 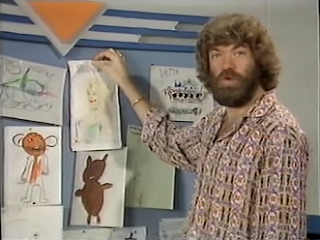 With nods to the coiffured stylings of Scandinavian folk musicians, Matthew Kelly was, during the mid 1980s, a very hairy man. As you can see here, he's pinning viewers' drawings onto the wall, but only weeks previously, upon a rather narcissistic request for pictures of himself to be sent in, Kelly unwittingly caused The Great Fuzzy Felt Shortage of 1986. 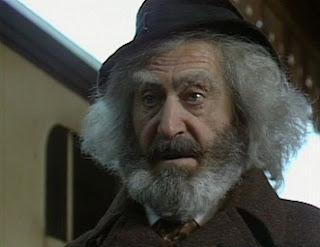 Despite owning a magical box of delights which opened up pathways to other worlds, it was only Cole Hawlings (Patrick Troughton) second most amazing possession as his beard was a fantastic construction of protein filaments. With his salt and pepper stylings underlining his vast experience and knowledge of all things weird and wonderful, it was a particularly refined beard which wouldn't have looked out of place on an Edwardian sea captain. Okay, his haircut offered up a bit too much hobo chic to ever reach the lofty position of captain, but if your boat was attacked by a sea monster, Cole Hawlings would be the perfect man in charge. 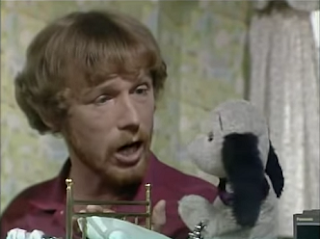 Matthew Corbett faced a tough dilemma as host of The Sooty Show as, on the one hand, his furry co-stars had the most wonderful allover body beards, but he also had to draw a line between man and beast to prevent an animalistic anarchy engulfing the house. Luckily, Corbett was able to call upon the experience of zoologists and barbers to design a beard which would, firstly, define him as a man, but also call to mind his wild, primate ancestors. 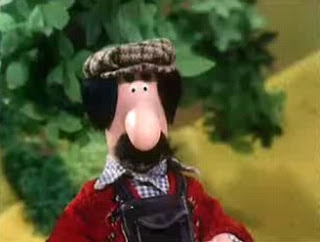 Ask any man if they worry about their length from time to time and the answer will be a resounding YES! However, for Ted Glen, it's plain to see that his great confidence stems from the eyepopping length of his thick, black moustache. In fact, is it even a moustache? Because, with just an extra inch, this man would have a goatee. Either way, it's a phenomenal effort. 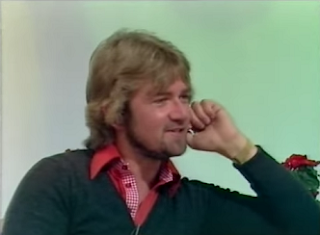 Noel Edmonds' beard has become a mainstay of British TV, but back in the early 80s it was behind a number of intriguing swaps on Swap Shop. Rather famously, in a move which went on to change the landscape of TV contracts, Noel Edmonds had a clause written into his contract to guarantee that his beard would never EVER be offered up as part of a potential swap. Just imagine a beardless Edmonds, Telly Addicts simply wouldn't have got off the ground. 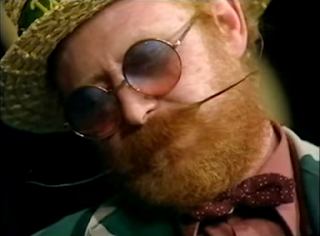 The original hipster, Wilf Lunn, had wowed children of the 1970s with his surrealist beard and he was determined to carry it on into the 1980s. Already highly eye catching due to its flame haired appearance, Lunn pushed his beard to even more spectacular levels by waxing his moustache a la Salvador Dali to bring some continental artistry to British children's TV in the 1980s. A fantastic example of what you can achieve when you let your mind off its creative leash.

So, there we have it, 21 examples of how children of the 1980s - in their most formative years - were bombarded with an assortment of facial hair styles. And this is why we're now surrounded by a new generation of hairy faces, one which draws from its past influences and seeks to, somehow, better them. Now, if you'll excuse me, I'm off to chuck my razor in the bin.
Posted by Telly Viewer at 2/11/2017
Email ThisBlogThis!Share to TwitterShare to FacebookShare to Pinterest