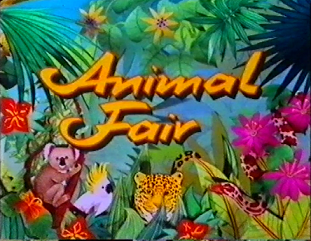 Animal Fair uses stock footage to bring wildlife from all four corners of the globe into our living rooms without the carpets being turned into a horrendous combination of browns and smells. And that's why we get to see beavers chewing through trees, crocodiles burying their eggs on the riverbank and gorillas lumbering across grasslands. Occasionally, original footage is also included, but this is reserved purely for UK based filming such as Gilly the collie dog going fishing.


Wildlife footage is all well and good, but you need something to bring it all together and provide, at the very least, a basic narrative. Luckily, not only does Animal Fair have antipodean great Don Spencer on hand, but Don's mercurial talents are also coming along for the ride; songs featured include an ode to Don's beloved marsupial family ("It's a marsupial! It's a marsupial"), a ditty about the deceptive nature of crocodiles ("Crocodile, you've got a wonderful smile, and I must admit I kind of like your style") and even a song about garden wildlife ("Ants so busy working all the day, I wonder if they stop for tea").

Two series of Animal Fair were produced for BBC with the first series in 1986 comprising 8 episodes (airing at 4pm on a Wednesday and then repeated the next day in the lunchtime SeeSaw slot) and the second series in 1988 being a shorter run of 5 episodes (episodes airing at 4pm on Wednesdays). The series was repeated a few times on BBC1 and BBC2, the final repeats came in 1992.

Despite the first series airing in an era where I managed to maintain an encyclopedic knowledge of lunchtime children's TV, I honestly can't remember one sing iota about Animal Fair. Naturally, this was a troubling situation, so I leapt at the chance to watch a few episodes when they were offered to me.

There's something quite enchanting about wildlife documentaries, captured on camera instead of cowering away or lurking in the undergrowth, it's an opportunity to view the less than subservient animal subjects of the world we've taken control of. And Animal Fair is no different.

Children, of course, are great explorers and ravenous for new sights and sounds, so Animal Fair delivers plenty of exotic animals such as wombats, crocodiles and prairie dogs to satisfy this curiosity. However, children also love the security of familiarity and that's why it's a clever move to include collie dogs, cats and hedgehogs.

Most exciting, though, are the songs in Animal Fair. Anyone who was young in the 1980s will be well aware of Don Spencer and his talent for knocking up a catchy little number. He thrilled us in Play School, he dazzled us in Hokey Cokey and the musical prowess of those two shows is easily matched by Animal Fair.

In fact, given that Don Spencer is so engaging in front of the camera, it's a real shame he's merely on narration duties in Animal Fair. Seeing a presenter get up close with animals always makes for an intimate affair, but I guess the budget wouldn't stretch to sending Spencer all round the world.


All the Fun of the Fair?

Animal Fair may be a simplistic affair and certainly surpassed - in terms of vision - by The Really Wild Show and Two by Two, but it remains a menagerie of fun and is certainly more entertaining than any stuffy old book. And, of course, there's Don Spencer. And Don Spencer songs. And that's a marvellous combination, so Animal Fair gets the Curious British Telly seal of approval.
Posted by Telly Viewer at 2/24/2017
Email ThisBlogThis!Share to TwitterShare to FacebookShare to Pinterest