Further Adventures into the World of Used VHS 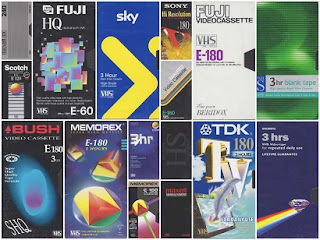 Last year, I decided to start hunting down old VHS tapes which people had recorded TV on over the years. My hope was to find some strange, and hopefully forgotten, TV shows which might make for some interesting watching. My first attempt at delving into a collection of random and unknown recordings wasn't particularly fruitful, but, for some inexplicable reason, I found trawling through the endless reams of ancient adverts and episodes of Sons and Daughters more than a bit enjoyable.

Since then, I've been donated two or three tapes which contained some specific shows I was looking for, but I was itching for another mammoth search through a load of old TDK and Memorex tapes.

And now, my friends, that day has rocked up in my driveway with almost the same levels of excitement as that day in 1985 when the man from Dixons came and set up our first ever VCR - a Ferguson Videostar. 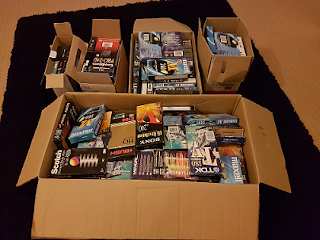 Several weeks ago, I was contacted by someone who said they had several boxes of old VHS tapes I might be interested in. They'd received a VCR on their 18th birthday back in 1988 (please don't judge them on their age...) and had been making recordings on it up until the mid 00s. Now, as you can see from the picture above, there are many videos there and the owner couldn't remember the specifics of what's on them, but there should be soaps, comedy, continuity and plenty of adverts.

Hopefully, I should uncover some curious footage, but I won't know until I've gone through God knows how many hours of archived recordings. The last lot of tapes didn't take that long to skip through, but I didn't have a baby back then. And, I don't know if it's just my baby, but they seem to have absolutely no interest in dusty old VHS tapes and, instead, they find plenty of other things to keep my sensory systems busy with. So, yeah, by the time I've finished, I may actually look like the Scotch Skeleton. 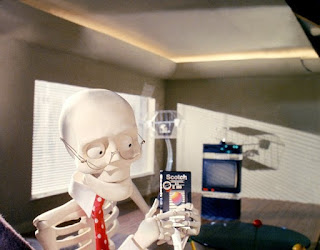 Anyway, any interesting finds will be posted up on here or Twitter, so keep your eyes peeled.

And REMEMBER: I'm always interested in any old tapes - the older, the better - that might be cluttering up your lofts and cupboards, so get in touch if you've got something to donate. I'll always do you a copy and thank you in one of my books if it helps contribute towards one of them.
Posted by Telly Viewer at 1/28/2017
Email ThisBlogThis!Share to TwitterShare to FacebookShare to Pinterest