The Old Men at the Zoo 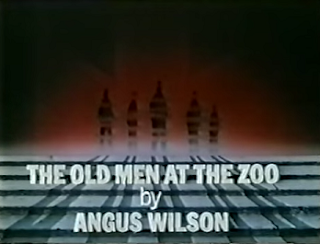 We're frequently reminded about the good old days of the British Empire when Britain truly ruled the seven seas - a somewhat rose tinted view of an era where social hardship, sexual inequality and cholera was rife. However, it apparently put the Great in Great Britain - a viewpoint that the far right are keen to share - but that was all in the past and we've since been incredibly polite and British by handing back our 'empire' to its rightful owners.

If, however, you had been strolling around London during the mid to late 1800s - at the height of the British Empire - there's a good chance that you would have had one thing on your mind. Yes, avoiding cholera, but apart from that you would have been cock-a-hoop at the prospect of visiting London Zoo - the first world's first ever scientific zoo - and meeting all manner of curious and exotic beasts.

And, all these years later, over a million people a year still visit London Zoo which acts as a nice testament to the innovative visions of the Victorians. The Victorians, of course, are long since gone and, therefore, many of their achievements have been surpassed, but perhaps London Zoo could still remain as a tangible link to the glories of The Old Men at the Zoo.

It's the first day at London Zoo for the new Secretary of the National Zoo, Simon Carter (Stuart Wilson), but he's not been there five minutes and he's already got his hands full. Smokey the giraffe has just killed one of the wardens by - and no man wants this - a swift, brutal kick to the testicles. Desperately seeking some form of moral, ethical response from those above him at the zoo, Simon finds himself running into a brick wall of self-centred obsession from zoo director Edwin Leacock (Maurice Denham). Far too busy to concern himself with the ramifications of a sickly, but violent giraffe, Leacock is, instead, dreaming of the plaudits he hopes to receive following his upcoming TV lecture. And the focus of this lecture will be on the plans to move London Zoo's inventory to a national park. Eager to provide the real estate for this park is Lord Godmanchester (Robert Morley), president of the zoo and all round press magnate who understands the currency of propaganda like no other.

And, after all, as Godmanchester reflects "The public only really understand animals", so, with the threat of nuclear war looming on the horizon, shunting the symbolic animals out of the city should instill a desire for the public to follow suit. However, it's a very rushed and poorly co-ordinated move; the Welsh locals are attacked by animals which escape the derisory security, whilst Leacock's daughter is killed during what appears to be an act of bestiality in the forest with a dog. 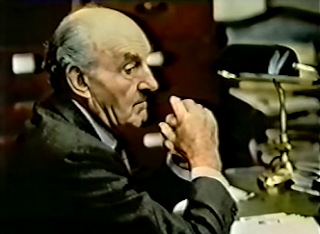 Labelled a disaster, the animals are steadily ferried back to London Zoo, but Leacock is no longer in charge. Instead, mammal keeper (and the first man to capture a yeti), Sir Robert Falcon (Robert Urquhart) is promoted. Unfortunately, following his return from a self-imposed exile abroad, Falcon's plans for the zoo and his own behavior is wildly skewered by the power of running such a prestigious institution. With nuclear war edging ever closer, Falcon's developing madness is emblematic of the political problems engulfing Britain.

Despite all the chaos around him, Carter understands the importance of the zoo as a beacon of hope.However, Carter is continually hamstrung by the arrogance and pomposity of the squabbling old men around him. Refusing to be swept up in all this madness, and wise to the ongoing nuclear threat, reptile keeper Englander (Marius Goring) flees to Scotland with his unfashionable political views and leaves Carter to deal with a ranting Falcon as the first bombs drop. 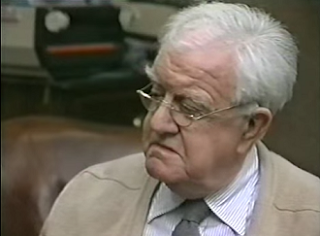 Waking two years later, Carter has survived the nuclear attack thanks to London coming through relatively unscathed. However, as with the rest of the population, Carter has suffered injuries and now has cancer. Due to the breakdown of British society after the attacks, a new government is in place which smacks of facism and has Britain in its totalitarian grip. With Falcon perishing in the nuclear holocaust, Englander is now the zoo's director, but his is a brand of madness far removed from the ranting of Falcon and the delusions of Leacock.

Carter returns to his position as Secretary, but it's at a very different zoo in a very different London. Englander's 'Europe Day' finds the zoo transformed into a disturbing recreation of the Colosseum where so called criminals are caged and publicly harangued by lions. Carter's horror at this new landscape leads to him openly doubting the new regime, but it's a viewpoint which will see him landed in a concentration camp along with other subversives such as Mr Sanderson (Andrew Cruickshank) who previously served as head of the insect collection. 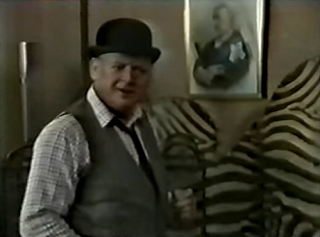 Britain (and Carter) have a bleak, oppressed future ahead of them, but will the resistance headed by Carter's wife Martha (Toria Fuller) bring about a more optimistic outlook for all?

Behind the Old Men

The Old Men at the Zoo was a five episode series which aired on BBC2 in autumn 1983 and was based on the 1961 novel of the same name by Angus Wilson. The novel was adapted by Troy Kennedy - writer of the first and last episodes of Z Cars and The Italian Job - who altered the narrative slightly by moving it into a 1990s landscape on the edge of nuclear war as opposed to Wilson's vision which was set in the 1970s with Europe on the brink of war. 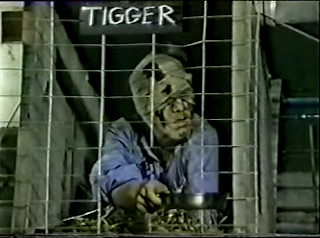 The series aired, first, on Thursday evenings at 9.30pm and each 55 minute episode was then repeated the following Sunday at 9.35pm. A few days after the final episode aired, The Old Men at the Zoo was featured on BBC2 television review show Did You See...? The serial has not been repeated since and has never received a commercial release.

I was searching for a copy of 1993's London Zoo documentary The Ark when I stumbled across a mention of The Old Men at the Zoo which combined drama, animals and a dose of post apocalyptic hell. Now, for some rather perverse reason, I can't get enough of post apocalyptic content and it's associated woes and hardships, so viewing The Old Men at the Zoo became a necessity.

However, despite the final episode (and about 10 minutes of the penultimate episode) revelling in a bleak, post apocalyptic landscape, the majority of The Old Men at the Zoo uses the threat of nuclear war as a despondent murmur in the background whilst the petty politics of the zoo take centre stage for what feels like an aeon. 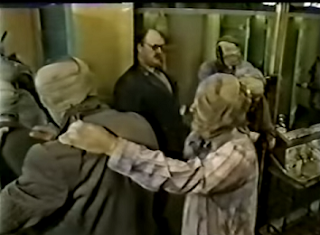 And whilst there may be shades of Orwell in Wilson's use of London Zoo as a metaphor for the crumbling state of Britain, it's a rather unengaging and muddled device which severely tests your attention levels for a boredom inducing 4.75 episodes. Sure, things suddenly pick up, but the journey there is such a heavy booted trudge through banal allegories that you could easily be excused for bailing out.

Saying that, the final episode is quite fantastic. Bringing Angus Wilson's worst fears to life, episode five taps into that fear held by many in the 1930s that facism was going to rise to supremacy. And, with Englander now clad like one of the head honchos from the SS, The Old Men at the Zoo suddenly takes an intriguing side step into an examination of totalitarian hell which can thrive when a broken society desperately searches for leadership. 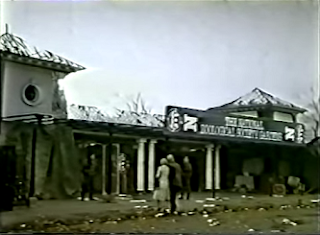 Therefore, we're treated to secret police factions exacting brutality and torture on so called subversives and, most disturbingly, a somewhat low rent (almost comical in its shoddyness) concentration camp. It's here that poor Mr Sanderson meets his end as part of a small scale genocide against subversives and Carter is imprisoned in shabby conditions for his deceit. Combined with the sickening Europe Day, the pre-war slaughter of the animals and that stomach churning moment as the bombs drop, there's salvation, in the end, for the serial's fortunes.

Sadly, the preceding episodes, though, have focussed far too sharply on the posturing arrogance of the old men at the zoo. Okay, Carter is a refreshing hero-like piece in the jigsaw, but even his role feels bogged down by the neverending advancement of the series' framework. It's a metaphor which could have been delivered much more succinctly in two and a half episodes. Personally, I'd like to have seen the script edited brutally and more of Simon's hardship once he awakes to Englander's rule. 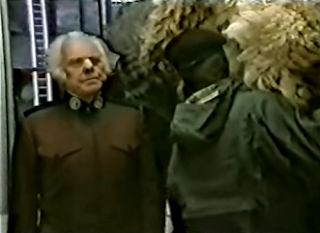 One of the serial's saving graces, though, is the acting on display. Almost all of the lead actors inhabit their characters perfectly and bring their ticking nuances and peculiarities to the fore such as Godmanchester's desire for manipulation, Falcon's escalating madness and Englander's need to control and betray those around him. Stuart Wilson as Carter also has to come in for special praise due to the level of honesty and righteousness he delivers as the lone voice of reason and emotion, the true zoo keeper overlooking the unruly animals.

With a plot sadly lacking in immediate action or thrust, The Old Men at the Zoo feels like you're wading through treacle until you suddenly stumble across the magnificent final. Reaching this point, however, feels like hard work and lacks all the genuine tension of Threads which built its terror and fear stealthily in the background before escalating suddenly and quickly hooking the viewer in emotionally.

The Old Men at the Zoo isn't Threads though, so it's a little unfair to compare as they're both striving for very different things. Ultimately, despite the fine acting and intriguing finale, The Old Men at the Zoo is a leaden attempt at post apocalyptic drama which fails to find its groove early enough to get the viewer on its side. And it most certainly doesn't call to mind the folly of Victorian achievement so, instead, I'd recommend an actual trip to London Zoo where, at the very worst, you'll get nipped by a gnu.
Posted by Telly Viewer at 1/07/2017
Email ThisBlogThis!Share to TwitterShare to FacebookShare to Pinterest