15 of the Greatest Evil Villains of British Children’s TV 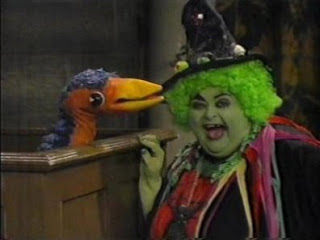 Television's not really television without villains, is it? After all, why would anyone tune in to see the good guys just sitting round in a world free from jeopardy and tension? Exactly, it would generate about as much narrative excitement as our own humdrum lives, so that's why television needs villains to provide that bit of fantasy and escapism that we crave.

Now, when it comes to children's TV, villains are particularly interesting characters as they're installed not only to act as the antagonists, but also to symbolise the dark paths one can wander down if they stray off the straight and narrow.

And it's because of this symbolism that they become so ingrained in our memories, so let's take a look at 15 of the greatest evil villains of British children's TV. 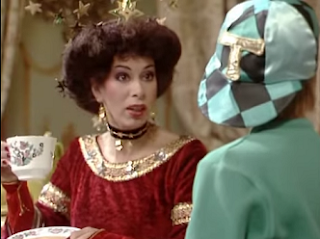 Tallulah Bag (Elizabeth Estensen) and Tabatha Bag (Georgina Hale) - both better known as T-Bag - were a pair of villainous, witchy sisters who caused havoc for Thomas Shirt (John Hasler) aka T-Shirt in a series of CITV shows.

Tallulah starred in the shows broadcast between 1985 - 1989 before making way for Tabatha to terrorise the airwaves until 1992. Both incarnations of T-Bag stoked their magical powers by supping cups of tea made from the High T plant, but were unable to brew a decent cuppa themselves. Only T-Shirt could serve up a cup with the requisite magic, hence T-Bag's constant harassment of the wee whippersnapper. 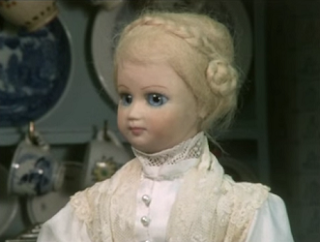 The absolute queen bitch of stop-motion animation, Marchpane was the wicked, snobbish and psychopathic doll from 1984's Tottie. Now, at first glance, with her blonde hair and blue eyes, she may look like the epitome of purity and innocence, but Marchpane was much more calculating than that.

Marchpane knew that rival doll Birdie was made from plastic, so Marchpane started a fire which was all part of a devilishly pre-meditated plan to lure Birdie towards the dangerous heat. And poor old Birdie, rushing to rescue fellow doll Apple, melted away in one of the most disturbing scenes of any children's TV show ever. 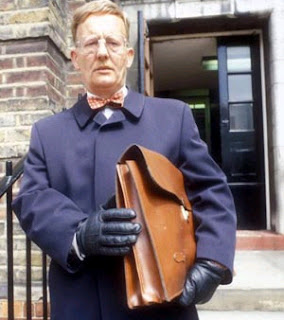 With a distaste for children bordering on sadistic, it's difficult to imagine how Mr Bronson (Michael Sheard) ever ended up in the teaching profession. However, the corridors of Grange Hill found themselves housing his barking, master disciplinarian ways and soon established him as a sinister presence on our screens.

Best known for his campaign of hate against Danny Kendall - who would later die in Bronson's car, after nicking it - Bronson regularly bullied pupils and had little time for the protestations of fellow teachers about his heinous machinations.

And he wore an absolutely hilarious toupee. It was nicked once, actually, and prompted a huge cheer from children across the land as his bald bonce shone brightly under the harsh fluorescent lighting. 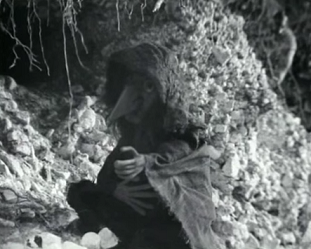 With a grotesque pointed nose, skeletal hands and screecing, wizened voice, The Witch from The Pogles was a terrifying concoction of spite and wickedness which contrasted sharply with the kind, good natured values of Mr and Mrs Pogle. Constantly trying to capture and destroy the Pogles, The Witch was deemed so horrifying by the BBC that the old hag was swiftly removed from the series when it morphed into Pogles Wood.

5. The Sheriff of Nottingham 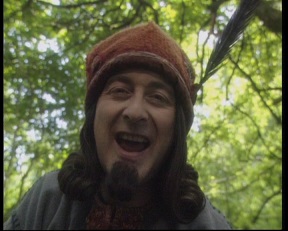 One of the best ways to disarm a villain is by laughing at them and, God knows, there were plenty of opportunities in Maid Marian and Her Merry Men to ridicule the Sheriff of Nottingham (Tony Robinson). Driven by an obsession with taxes, the Sheriff had a ravenous appetite for all that glitters and even went as far as arresting a chicken for illegal parking and then demanding a fine was paid.

Unfortunately for the Sheriff, Maid Marian had other ideas about how wealth should be redistributed, so the Sheriff was regularly hoisted, quite hilariously, by his own petard. And, when played with the comic gusto of Tony Robinson, it made for some of the finest comedy ever seen on British children's TV 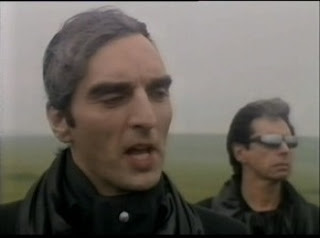 The Wirdegen were a particularly nasty race of aliens who featured in 1987's Aliens in the Family and seemed to want nothing more than to exterminate the peaceful, friendly Galgonquan aliens. And, in particular, the Wirdegen Leader (Granville Saxton) took evil to a new level of extreme, brooding terror.

With a piercingly sinister set of eyes (and equally monstrous eyebrows) packed full of venomous evil, the Wirdegen Leader prompted panic attacks every time he strode in front of the camera with an intensity unmatched by most children's TV villains. Frankly, if I ever saw his disquieting features peering through my window at night, I'd probably top myself on the spot rather than endure his presence a second longer. 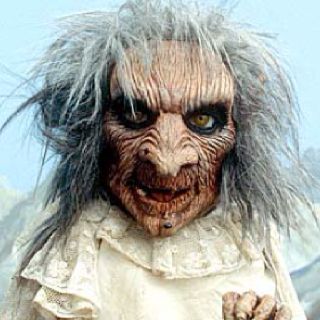 Terrahawks absolutely terrified me as a child and it's not a surprise, is it? I mean, just look at the evil Zelda. How can you honestly expect children not to have nightmares about that? She was like something out of an unsettling 1970s horror film, not a children's TV show.

Despite my fear - and, yes, she still scares me - Zelda was a fantastic villain thanks to this base horror she managed to instill in a generation of children. And with her megalomania running rampant in Terrahawks coupled with a desire to destroy the human race, she made a worthy and formidable villain. 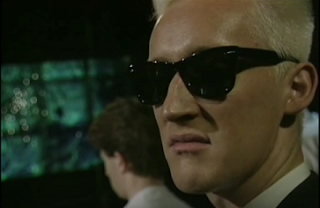 Villains are, quite often, fairly snappy dressers (see The Master in Doctor Who). And Mr Eldritch from 1991's Dark Season didn't disappoint in the fashion stakes. Wearing shades, a black mac and trousers a disturbing shade of midnight, Mr Eldritch understood the importance of a little contrast, so topped his moody attire with a bleached blond barnet.

It was a striking look, but even more striking was his nefarious plan for world domination.Whilst pretending to extend the hand of charity by donating computers to school children, Mr Eldritch used this as front to hack into the brain power of the children to swell his own intelligence and power. And then destroy the planet.

So, yeah, he was a dastardly swine and a half. 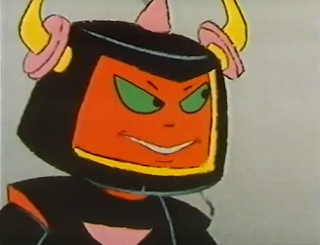 Zudo Bug - from mid 80s cartoon Telebugs - was an interesting exploration of the damaging effects of mental health on an individuals actions. Now, Zudo Bug, being a robot, certainly wasn't suffering from the type of mental illness your bog standard psychologist would understand, this was more of a robotic psychosis.

Created by Professor Brainstrain, Zudo Bug was meant to be a beacon of goodness like his fellow Telebugs, but due to a programming mishap caused by Brainstrain's pet cat, Zudo Bug malfunctioned and began to run amok in a world not prepared for such dangerous, jet propelled chaos. 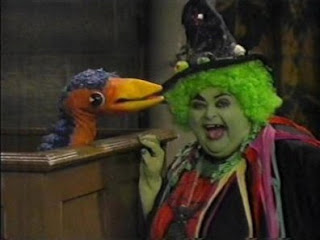 Ah, Grotbags, the go-to insult for someone's mum for a whole generation of children! First emerging in the 1980s on Emu's All Live Pink Windmill Show, Grotbags (Carol Lee Scott) had a real distaste for children or, as she called them, "brats" and a strong determination to kidnap Emu (possibly on the orders of a vengeful Michael Parkinson).

Sure, it was all very hammy, but this green skinned, warty witch became iconic enough to get her own TV show, Grotbags, in the early 90s. She was even less scary by this point, though, and even ended up handing out prizes to brats. Nonetheless, Grotbags remains a well remembered villain and a popular choice at fancy dress parties for grown up brats. 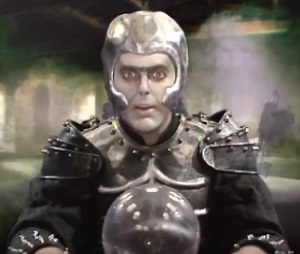 Knightmare failed to establish a true figurehead for the "opposition" throughout its first few series despite the sterling, but underused, efforts of John Woodnutt as Mogdred. However, series 5 saw the introduction of arch villain Lord Fear (Mark Knight) who truly defined the dangerous depths of the dungeon.

Clad in the kind of ghoulish outfit and makeup that even a cider drinking goth would shy away from, Lord Fear was regularly spied upon by teams in Knightmare to get a heads up on his evil plans. However, it was his madness and thirst for power which made him such a mercenary, aspects which were pushed to magnificent extremes by Mark Knight. 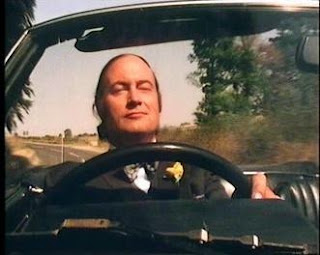 1977's Children of the Stones terrified a nation of children, many of whom still have nightmares about the haunting incidental music and bonkers supernatural activity contained within the narrative. And fronting these unsettling themes was Rafael Hendrick (Iain Cuthbertson).

Like all the very best villains, Hendrick's end goal was absolute power. To help him achieve this, he went along the rather intricate route of harnessing the power of a black hole through ancient druid rituals involving a mysterious stone circle to brainwash the inhabitants of a sleepy village.

And, yes, as you've probably guessed, Hendrick was completely crackers.

However, he was enveloped by that most dangerous type of insanity, the one that lies beneath an intelligent and calm persona. This is why he was able to sweep to power with ease and threaten to turn the entire village to stone.

Why couldn't he just have baked a nice Victoria sponge for the village fete? 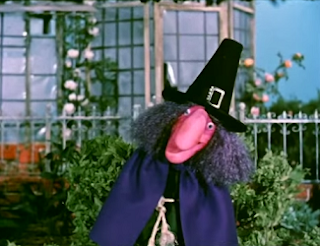 Yes, that's right, it's another witch! Children's TV really has a passion for those wicked gals, doesn't it?

Belladonna (or Deadly Nightshade as she's also known) appeared just once in The Herbs, but with her shapeshifting magic and evil cackles, she proved to be a rather memorable character. Packed full of deception, Belladonna stopped at nothing to take control of Parsley the Lion et al even stooping to poisoning the unsuspecting herbs.

Despite her sinister plans, after being yapped at by Dill the Dog, Belladonna turned out to be a bit of wimp and swiftly buggered off. 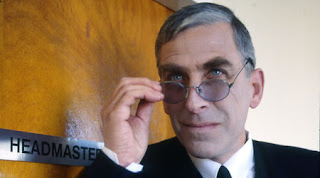 Blessed with the ability to hypnotise 99.9% of the population, The Demon Headmaster adopts the somewhat cliché, but lofty ambitions of controlling the entire world. Little is ever revealed about his origins, but this only adds to his enigmatic menace and his determination to rule the world is underlined by the numerous stabs he had at it over the course of three series. 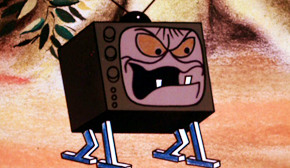 The witch theme continues apace, but at least this time it's a particularly curious looking witch. Evil Edna, the main antagonist in Willo the Wisp, dispensed of the traditional pointed hat and broomstick and instead went for, uh, the rather random manifestation of a TV set.

Horrifying, right? Well, yes, actually as it was a particularly ugly TV set. Okay, yes, all TV sets were pretty ugly back in 1981, but Evil Edna had the most hideous grin which revealed that she owned just two crooked teeth. And she had a whole host of evil spells up her sleeves (did she even have sleeves?!) such as smiting Mavis the fairy with two faces, so old Edna certainly wasn't one to be messed with.

Who were your favourite villains? Let me know in the comments below!
Posted by Telly Viewer at 9/17/2016
Email ThisBlogThis!Share to TwitterShare to FacebookShare to Pinterest